Share All sharing options for: A Cavalier All-Star Weekend Bonanza! 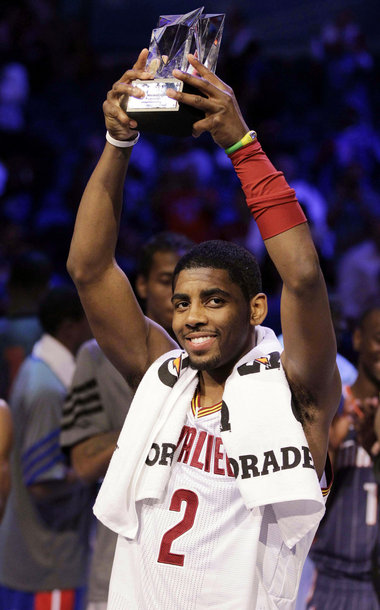 It's All-Star Weekend, and for the first time since LeBron James left, the Cavaliers have someone performing every day this weekend. So what do I expect from these guys and from the weekend on the whole? Let's take a look.

Celebrity Game: Unfortunately, there is absolutely no Cavalier/Ohio connection in the Celebrity Game this year. But that doesn't mean you shouldn't watch it! Dikembe Mutombo will laugh, Usain Bolt will be fast, and Nick Cannon will be hilarrriious (extremely bad language in that link). Plus, there is the very ESPN narrative-y coaching "rivalry" that is Russell Westbrook vs. James Harden. Oh! And to top it off you don't have to stab your eyes out after watching Justin Bieber shoot a basketball this year! It's a win-win for everyone!

Rookie-Sophomore Game: The Cavaliers have a very heavy presence here, with four players: Kyrie Irving, Dion Waiters, and Tyler Zeller will suit up for Team Shaq, while Tristan Thompson becomes sad Tristan Thompson on Team Chuck all by himself. Team Shaq is absolutely going to run away with this. Kyrie, Waiters, Chandler Parsons, Michael Kidd-Gilchrist, and Harrison Barnes are all pretty much tailor-made for All-Star games. I also expect Zeller to be good here. There is no defense involved, and he can really run out in transition against these guys. My specific predictions for the Cavaliers' participants:

Thompson: doesn't have an All-Star fun type of game, plus he has to fight with Kenneth Faried, Anthony Davis, and Nikola Vucevic for minutes. Maybe something like five points and five rebounds, while only playing 15 minutes.

Waiters: either scores 25 or 6 and nothing in between. He's either going to go supernova on everyone and make 5 threes and have 3 monster dunks, or Shaq is going to sit him on the bench after he misses two shots because of how guard-heavy this team is.

Zeller: my sleeper to have a big game. He'll get out in transition a ton and score a bunch of easy buckets for Team Shaq, who might actually need his size because he's their only center after Andre Drummond's injury. Zeller goes for 18 and 6, surprising everyone.

Irving: Kyrie won MVP in this game last year and said earlier this week he wants to score 50 in this game. I say he comes up just short, scoring 46 and leading Team Shaq to a dominating win, 151-130.

All-Star Saturday: The festivities kick off with the D-League All-Star Game, where former Cavalier D.J. Kennedy and Canton Charge center Arinze Onuaku will be suiting up for the Prospects team. I'm mostly just intensely disappointed that we don't get a Luke Harangody sighting, so I'll probably just skip out on watching this event.

Then we get into the real Saturday night fun, where we get to see three-pointers, dunks, and old men shoot half-courters. There is no Cavalier participation in the first two events of the night, the Shooting Stars competition and the Skills Challenge. The highlights of these two events will assuredly be watching Muggsy Bogues' attempt to get the ball to the rim from half-court, and seeing if anyone can come within five seconds of Tony Parker's mark in the Skills Challenge.

(Seriously, Brandon Knight is in that thing! Did they miss out on getting their first, I don't know, 45 choices before finally reaching Knight and asking him to join? I think I'd rather watch Brevin Knight run through that obstacle course.)

The third event of the night is the Three-Point Shootout, where Irving attempts to join the ranks of hallowed legends such as Kapono, Hornacek, and Lenard in becoming a champion. His competition here is pretty fierce, as he has to face off against Ryan Anderson's Abed Nadir-like beard, The Red Mamba, Stephen Curry (and his smoking hot mom), Paul George, and Steve Novak, who sources tell me will probably be forced to do the discount-double-check after every make. Kyrie will probably need to go pretty crazy here to beat this tough field, but if anyone can do it, it's him. I'm guessing it comes down to him, Curry, and Novak. Whoever wins that is anyone's guess.

Finally we come to the dunk contest. Even though there are no Cavaliers participating (sorry Alonzo Gee), I'm super excited about this. James White, Gerald Green, and Terrence Ross are all going to put on a show here. For the first time in a long time, I think we're actually going to have a dunk contest to be proud of. White does a between the legs dunk from the free-throw line, walks off with the trophy, and becomes insanely marketable in New York City.

All-Star Game: Just as the game itself is a bit of a letdown at the end of the weekend, this summary will be too. Since Coach Spo has decided that stroking Chris Bosh's ego is more important than starting an actual point guard, Kyrie will be coming off the bench in the All-Star game. I imagine that Kyrie ends up playing a pretty good amount of the game though, because Spoelstra probably won't want his guys playing a ton of minutes if possible. Irving goes crazy in anger at his snub, scores 38 points, leading the East to victory over the West 139-131!

(Okay that last part was kind of a joke. Really, Kyrie scores something like 16 points, plays a bunch of minutes well, and makes a good impression on those watching at home. West probably wins, but Kyrie gains bragging rights as the one of the big winners of All-Star Weekend.)