The Cavaliers were nationally televised for the first time all year and they made a pretty good impression. After a rough first three quarters, Cleveland turned it on and rushed past the Hornets for the 105-100 win.

America, Kyrie Irving. Kyrie Irving, America. Nice of you two to get to know each other. I think you'll have a beautiful relationship.

The casual NBA fan probably hasn't seen much of the Cleveland Cavaliers this year. On Wednesday night, the Cavs had the chance to play a nationally televised game against the New Orleans Hornets on ESPN. It was an opportunity for people to see the future of the NBA: Kyrie Irving and Anthony Davis.

It was a rather ugly, uneventful game for the first three quarters, but then the fourth quarter rolled around..

And then Kyrie Irving happened.

Kyrie entered the game with roughly 7:30 minutes remaining in a one-possession game. From that point on, Kyrie scored 20 points in the final quarter. He finished with 35 points, 7 assists, and 5 rebounds, powering the Cavs to a 105-100 win at home. 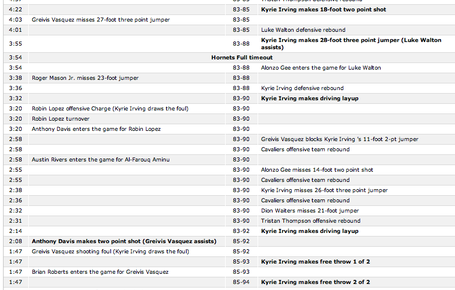 Dion Waiters had himself a solid game. He scored an efficient 16 points on 6 of 10 shooting.

The Cavs got some little contributions from a lot of guys. Robin Lopez gave Tyler Zeller fits, but it ultimately didn't burn them too much. Tristan Thompson had a rough night from the line and the field, but hit some clutch free throws down the stretch when it mattered the most. Once again, Wayne Ellington gave Byron Scott some very solid minutes off the bench.

Check out SB Nation's Hornets coverage at At The Hive.