The Cavs travel to Miami to take on the Heat after defeating the Magic last night. Can the Cavs go on a winning streak?

Share All sharing options for: Cavaliers at Heat: Do Cavs' Fans Really Care About Revenge Anymore?

Miami has been a buzz saw recently, winning their past 10 games by an average of 13.7 points. However, the Cavaliers have won eight of their past 13 games, including a 24 point win last night vs. the Magic. What gives tonight?

Where on my eyeballs? Fox Sports Ohio / NBA League Pass

Why Should You Watch? Okay I know this kind of sucks to say on a Cleveland blog, but the streak that LeBron is on right now is unbelievable. He's the best player on the planet and it's not even close at this particular moment in time. Dwyane Wade has been spectacular as well recently, and Miami's defense has basically turned into turnover-creating machine. Also, getting to watch Kyrie Irving take on a great team like this will really be fun.

Any Former Cavaliers That We Should Care About? Moving on from here....

Did Lil Wayne Recently Make Disparaging Remarks About One Of Miami's Big Three? Yes, of course he did. This was after he was unceremoniously discharged from AAA after making a scene. Ridiculous drama rules supreme in Miami.

Other Notes? -The bench was fantastic last night, and they'll be needed again tonight if the Cavs want to defeat the Heat.

-The Cavaliers are 1-7 against the Heat since James left.

-Unfortunately, Miami is no longer the home to Dexter Pittman. He was traded for the rights to Ricky Sanchez (okay, really Pittman was traded just so they could have his roster spot). If you don't know who the heck Ricky Sanchez is, I promise you that you're not alone.

-Chris Bosh is a creepy dude (and continues to prove my theory that I think he may have been drunk at the All-Star Game): 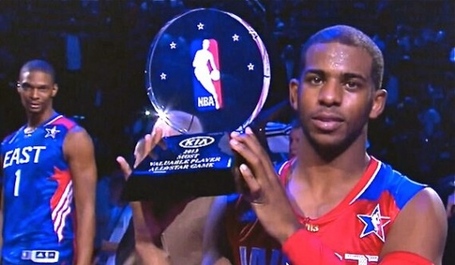