The NCAA Tournament is plenty of fun, but it can be educational too. For Cavaliers' fans, here's some of the most intriguing draft prospects to keep an eye on during the Big Dance.

If you're like me, you enjoy watching the NCAA Tournament just because of the drama and iconic moments. But other than that, it's kind of just terrible basketball. But never fear, there are other reasons for you to be watching March Madness -- draft prospects.

It's a weird year for top draft prospects in the tournament. A good number of projected first rounders are not in the field of 68. Nerlens Noel (my personal favorite) is out for the year with an ACL injury. Alex Len will be facing inferior competition because his Maryland Terrapins only qualified for the NIT. Isaiah Austin and the Baylor Bears also didn't qualify. That's three of the top big men in the upcoming draft and that kind of sucks since the Cavaliers will most definitely be in the market for a center in June. There's a couple other big time prospects overseas (Dario Saric, Rudy Gobert) and obviously they won't be in the Big Dance either. But don't worry, there's still plenty of potential future Cleveland Cavaliers in this year's tournament. I obviously cannot go through every prospect, but here's some of the guys that I'll be going out of my way to watch as my bracket crumbles in front of my face. 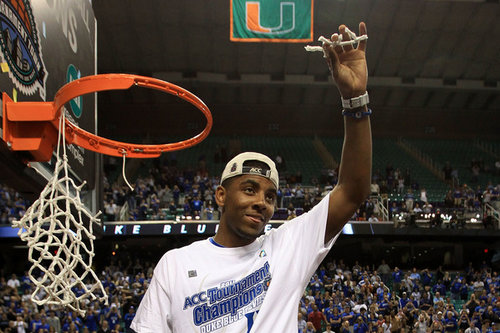 Join the Fear the Sword NCAA bracket challenge and try to beat the FTS writers and your fellow readers.

There's a couple of guys that we've been hyping up for months now. There's some folly in this approach because when you hype up certain guys, you tend to accidentally overlook other talented guys. For example, last year we were all focused on Harrison Barnes, Anthony Davis, and Michael Kidd-Gilchrist. As a result, I'm not sure anybody paid all that much attention to Dion Waiters. Waiters had a great college season, but since none of us were really noticing, we were all shocked on draft night. So at risk of doing the same this year, here are the obvious names that we'll all be watching.

The 6-8 small forward from Georgetown is right near the top of my wish list (after Noel) and he'll have a chance to show out for scouts as the Hoyas make a run to the Final Four. Georgetown is a #2 seed and has a pretty good shot at cruising to the Elite Eight. Porter emerged as their superstar and will get plenty of opportunities to display his well-rounded game on the big stage.

The younger Zeller leads his #1 seed Indiana Hoosiers with a chance to grab a national championship. But more importantly (at least I think so), he has a chance to improve his draft stock even more. I already pointed out how many of the other top centers in this year's draft are watching from home, so Zeller kind of has the stage to himself. He has a very versatile game and has begun to take control like many people thought he would at the beginning of the season. Last year we saw Zeller battle with Kentucky's Anthony Davis, but there's no Anthony Davis in this tournament. Unless Indiana ends up playing Kansas (more on this in a second) with a chance to go to the national championship game, I'm not sure there's a team with the big man personnel to stop Cody.

I've been a big fan of McLemore since the first time that I saw him play. I'm not sure that he's a good fit on the Cavaliers' team, but he's a big time talent. He's at the top of most Big Boards right now, but his biggest knock is that he doesn't take over games frequently enough. He'll get a chance to fix that on the biggest stage of all. His stock is sky-high regardless of how he performs in the tournament, but he's still fun to watch.

Another favorite of the Fear the Sword community. He's got the length and scoring ability to be a top-flight wing in the NBA, but he's got several question marks as well. Can he contribute in ways other than scoring? Can he rebounds, defend, and make plays like some of the other top prospects? Unfortunately for Muhammad, he doesn't have the luxury of playing on a stacked team. His UCLA Bruins are a #6 seed and will be challenged right away in a matchup against the #11 Minnesota Gophers. If we are going to see a good amount of Muhammad, it will be because he is able to carry his team through the tournament.

Under the Radar Guys

I'm not sure if these guys are exactly "under the radar," but they aren't as highly touted as the other guys that I've listed. These prospects are more likely to be chosen with the Cavaliers' other first round pick -- whether it's the Miami Heat or Los Angeles Lakers' pick. For many of you, this may be the first time that you get to watch these players do their thang.

Big, strong, and skilled. I mentioned on Twitter last week that I thought Olynyk would be considered a top-10 prospect if he got a haircut and didn't have a girly name. Most people probably haven't seen Gonzaga play very often this year and Gonzaga simply hasn't played very many tough opponents. If Olynyk has a big tournament and gets Gonzaga to the Final Four, he might sneak into the top-10 regardless of his hair that reminds me way too much of Adam Morrison.

He's a freakish athlete and a remarkable rebounder. He's put up big numbers against fairly weak competition and I'll admit to not having seen him play many games. I hope that he gets a chance to play a few games and show what he can do.

Undersized for his skill set, but incredibly strong. When I see Young I just see a solid backup big man in the NBA who can be had late in the first round. If the Lakers end up missing the playoffs and the Cavaliers are picking 29th or 30th with the Miami pick, you could do worse than grabbing Patric Young and adding some toughness to that front court.

Withey is another one of my favorites. He's an insanely efficient scorer in the front court (although he doesn't do it that often) and a tremendous rebounder and shot blocker. His crazy length and volleyball background allow him to contest shots without fouling. He's a mid-late first rounder with a skill that the Cavaliers desperately need. He doesn't have the most glamorous of jobs, but he's damn good at it.