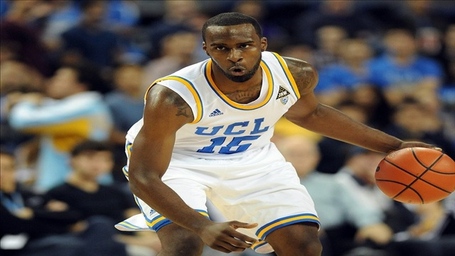 
Shabazz Muhammad was a considered by many publications the top recruiting prospect in the country going into this year’s NCAA season.

by Jerry Meyer - 03/01/2012 A relentless competitor, Muhammad is a physical wing scorer who loves to attack the basket. He also has a reliable jump shot and a terrific turn around jumper in the post. Also, a danger on the glass, Muhammad is a solid ball handler and passer, but is not known for his ability to create for teammates. on the other side of the ball, he is an above average defender. Jerry Meyer serves as a national scout and recruiting analyst for Rivals.com. He played at Lipscomb University where he became college basketball's all-time career assist leader. Meyer earned Mr. Basketball honors in the state of Tennessee as a high school junior and senior. He has served as an assistant coach at Vanderbilt and also co-authored the book, "Basketball Skills and Drills."


ESPN and MaxPreps also had Shabazz rated as the #2 recruit in the country.


Shabazz had problems with NCAA violations of which he was later cleared to play. While he did not miss games due to the infractions, he did miss valuable practice time at the beginning of the year. Not being able to join the team lead Shabazz to a less than stellar beginning to the season.


I am linking some scouting videos of Shabazz for your consideration. I have watched many of these and I have reached a few conclusions which I will list below. I ask you to watch them yourselves, form an opinion, then see if it agrees or disagrees with mine (Also, UCLA cheerleaders, they show them a lot)

Shooting: When Shabazz has time to set his feet (Which is rare, he is double-teamed often) Shabazz shoots a very high %. He really excels as a spot-up shooter when he has space and can square-up. He has a good shooting form and has range out to the 3 point line.


Shabazz has trouble trying to hit leaners in the lane. This is a difficult shot that he is forced into as a function of having the ball with the clock winding down. I think he would be better served to jump stop then pump fake to try and draw a foul or separation.


Off-ball Skills: UCLA runs Shabazz all over the floor. He is adept at using screens and knows how to gain separation from his man. This is a skill completely missing on the current Cavalier’s roster. While Shabazz is forced to throw up sub-optimal shots, he hits a very high % of open(good) attempts. I maintain that Shabazz will be a better shooter in the space oriented pro game than Otto Porter will be. He really fills it up when open.


Dribbling: As I have watched scouting videos over the season, Shabazz has been learning a jab step and is working on using his right hand more. Being left handed, Shabazz is very quick and powerful going to his left, but can sometimes struggle going to his right, and crossing over from the right side. His footwork is not great, but being 18 years old that is forgivable. I do not believe Shabazz will be a ball dominant player in the NBA, at least not for 4-5 years until he improves his dribbling and footwork. He is coordinated, but can at times, be obviously forcing the issue and trying to do too much. There is not a lot of offensive talent on UCLA, and he knows it. He often has to be the man on a nightly basis for his team to be competitive.


Shabazz REALLY needs to work on finishing around the rim, he is very explosive but can find himself elevated and unable to finish the shots. He tries a finger rolls where he should dunk, and tries to dunk where he should lay it in. He consistently beats his man, but is out of control at the rim. I feel at 6"6 225 he should finish better at the hoop. (Hi Dion)


Post: This is an area where Shabazz absolutely excels over virtually any other SG or SF in the country. Shabazz is very comfortable going into the post, flashing an array of post moves. He can hit a right-shoulder turnaround, he has a little half-hook like Tristan uses, and he knows how to use pump fakes to create space. Shabazz may not be 6"8, but he has an incredible wing span which allows him to shoot over taller players. Once he gets into the pros and improves his footwork, he will have a lot of versatility in an offense. Shabazz will also pass out of the post when double-teamed, and find people cutting to the basket. A High % of his assists come from post passing. This is an incredibly rare skill for an 18 year old wing, and should not be understated. LeBron was in the league for 8 years before he started to develop a post-game.


Rebounding: Shabazz is a good rebounder for someone who plays away from the basket a lot. When he does get near the hoop, he boxes out well and displays good effort going for the ball. Shabazz has a very high motor. Shabazz has good "bounce" when going after rebounds on the offensive end. He gets off the floor quickly for put-backs. I see no reason he will not be able to rebound effectively in the NBA.


Shabazz leaks out a LOT on defense. Even after made baskets UCLA will make a long pass to him up the court so he can go at the defense before it is set. This causes Shabazz to be out of position for rebounds a lot on the defensive end. Shabazz is adept at using his body to keep his man away from the rim, and at the end of games, opposing players seem to give up on it and sit near the wing.


Defense: UCLA runs as close to a pro-style defense as can be found in the NCAA, This is one of the reasons their players enter the league as prepared as they do. Shabazz displays a lot of effort on defense, which is rare for a young superstar. He really fights through screens and uses his giant wingspan to bother shots and to stop dribble penetration. Shabazz has REALLY long arms which he uses to disrupt shots around the rim. He gets a lot of partial blocks that don’t send the ball back, but do deflect the shot. He also can force opposing players to change the angle on their shot as they approach the rim. It’s college, and no one can dribble or make layups, so I don’t know if this will translate.


Athleticism: To be honest, I have a lot of trouble judging this from game film. Shabazz has great metrics for vertical jump, but does not explode for "head at rim level" dunks. I think the combine will tell a lot about him as an athlete. Shabazz is fast, but does not appear hurried on the court. He has good lateral quickness at the college level, but it is difficult to discern from game film if that quickness is enough at the next level.

Conclusion: I see no reason why Shabazz will not succeed at the next level in the space oriented game of the NBA. I don’t understand what scouts are so down on; his scoring metrics are off the charts for someone his age. He has a good motor, he displays effort, and he gets buckets. I really wish I could find a reliable shot chat for him to see where he shoots from to judge efficiency.


Quote about Shabazz which is very promising for the next level:

"Shabazz Muhammad credits his competitive temperament for pushing him to create high standards while at UCLA. "I've always had a killer instinct," Muhammad says, "and that's what separated me." Muhammad’s coaches and teammates laud his effort in practice and his drive to stay late at the gym. "He's a really fierce competitor, with everything we do, everywhere," said freshman teammate Kyle Anderson. Las Vegas Bishop Gorman coach Grant Rice raves about how Muhammad raised the intensity level of his teammates. "If they didn't go 100%, they were going to get an elbow to the face or dunked on," Rice says." Via Baxter Holmes/Los Angeles Times

I love that quality in players, I want a core guy that is Kobe/Michael crazy and pushes guys daily in practice.