With Byron Scott's firing this morning, the players gathered and answered questions from the Cleveland media. Here's what they had to say.

With the news coming out about Byron Scott's firing, player reactions are trickling in. Here's what we've got so far:

-Anderson Varejao was first to speak to the media:

Tristan Thompson had been Scott's biggest supporter to the media in recent weeks. His response to the firing: 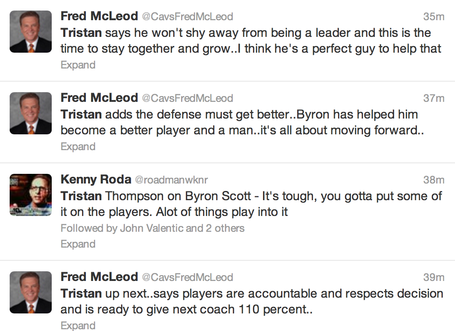 Dion Waiters didn't have much to say, but obviously surprised:

Then came Kyrie Irving, who had been noticeably quiet about Coach Scott throughout the past few weeks:

Luke Walton also fielded questions on a variety of matters, including both Scott and the effervescent Phil Jackson speculation:

So what does it all mean? The team leaders are definitely saying all of the right things in the media today about their shock and wishes that Scott could have stayed. It's very interesting that Irving seemed to be surprised and upset about the firing, particularly, given his reluctance to speak up to the media recently in favor of Scott.

It seems that the players' support is a little too late though, as Scott will not be coaching in Cleveland next season. Keep it with Fear The Sword as we'll be updating this news regularly today.