Our goal at Fear The Sword this draft season to provide you with coverage and profiles of every NCAA prospect that we can, along with a few internationals. Next on that list is Cody Zeller of Indiana.

Share All sharing options for: NBA Draft 2013: Prospect of the Day -- Cody Zeller

Today, we present Cody Zeller of Indiana. Zeller's obviously been on the NBA's radar for about four years now. With two brothers already in the league (including Tyler on the Cavaliers), the family pedigree is there. Cody has always been considered to be the best of the bunch as far as Zellers go, and I would say he has done nothing in his college career to change that. However, I believe that a multitude of factors have combined to make Cody's draft stock fall from its perceived high last year, when Zeller was projected as top five pick. 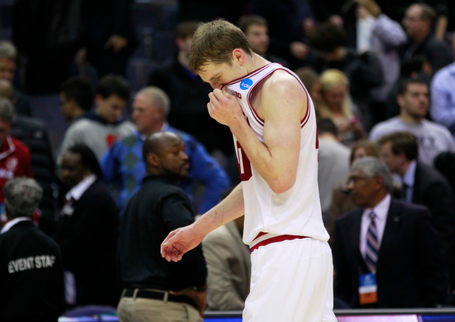 The first thing that people look at with Zeller is his body. While he's legitimately a seven-footer, his wingspan is a serious concern. With a wingspan of only 6'8" (according to Draft Express), Zeller's ability to be a defensive presence is already severely compromised. According to a Sports Illustrated article by David Epstein at the beginning of the season, the only NBA player since the early 1990s to have a wingspan shorter than his height is J.J. Redick. With Redick being a shooting guard and Zeller being a power forward/center, Zeller's lack of wingspan is a much more serious concern.

But that lack of wingspan isn't the only concern. After watching Tyler get beat up around the basket this season, there is a worry that the same fate may await Cody. While Cody looks a lot skinnier than Tyler, he does seem to be more muscular and a bit stronger in his upper body. He's also shown the ability to put on weight. After coming into college at 215 pounds, Zeller now weighs 240 pounds. It'll be necessary for him to continue to put on muscle in order to have a chance to guard power forwards in the NBA. 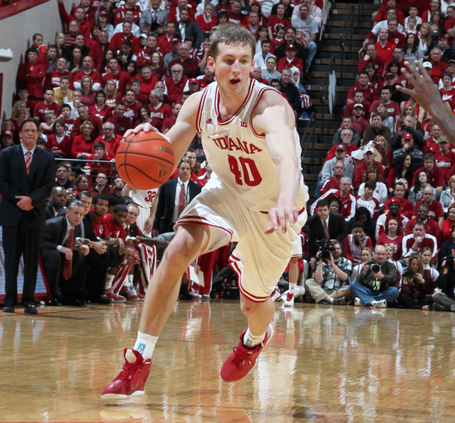 So how can Zeller beat these physical deficiencies to succeed in the NBA? While first off, he's one of the more coordinated seven-footers I've seen come through college. This coordination allows him to be one of the best offensive big men in the NCAA. Even though he experienced a slight drop in efficiency this season (his true shooting percentage dropped from .665 to .624 this season despite taking more free throws per game), he was still an extremely good offensive big man for the Hoosiers, averaging 16.5 points per game on 9.8 shots.

Using a vast array of spin moves and deft ball-handling for a seven-footer, Zeller utilizes his coordination to not only get to the bucket and score, but also draw contact and get to the line, where he shoots 76% on nearly nine free throws per-36 minutes. The ability to get to the line should transfer to the NBA, however I do have my concerns about his finishing over longer, more athletic players. Because of that, I think it'll be essential that he develop a 15-18 foot jumper. If he can at least flash a 15-foot jumper, it can not only lead to points, but it can also get defenders off balance, which may lead to an easier time getting foul shots. He shows potential in this regard, flashing solid mechanics and good balance on his shot. He's also great at running the floor, which within the right offensive system could get him a lot of easy buckets.

One place that I think he can show improvement is in the pick-and-roll. He didn't get the opportunity to do this enough at Indiana, as Yogi Ferrell was only a freshman and Jordan Hulls is simply a spot-up shooter. Indiana tended to use him more in post-up situations. However, with his coordination and solid shot form, he has potential to be an excellent weapon there. Even though he's not the quickest guy, he possesses excellent footwork and innate basketball sense to cut to rim and get open lay-ins or draw contact. The ability to run the pick-and-roll with point guards will be something NBA scouts will want to see from him in workouts, as he's not going to be nearly as successful in the NBA posting up as he was in college due to his athleticism. 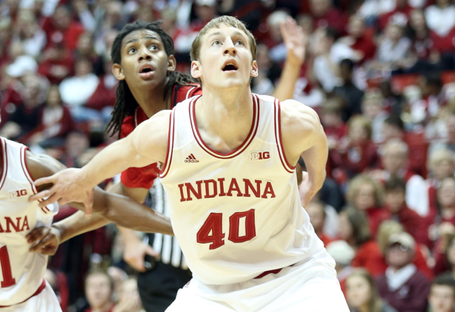 The biggest place that Zeller showed improvement this season was in his rebounding. He increased his rebounds from 6.6 to 8 per game, along with improving his rebounding percentage by nearly two full percent from 14.2% to 15.8%. Zeller showed better form and an increased desire to box out, which should help him in the NBA as his wingspan is going to hinder his rebounding ability. Additionally, he's a great offensive rebounder who seems to just understand angles and bounces off the rim, leading to extra possessions and easy put-backs. 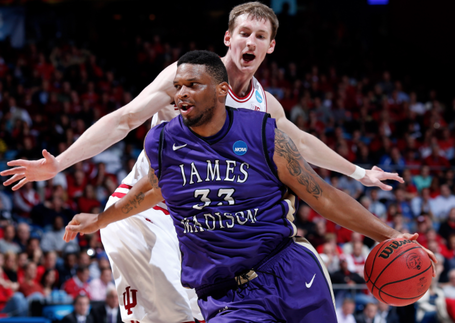 Defensively, Zeller is obviously going to have problems in the NBA. While he is extremely coordinated and shows excellent footwork, he isn't fleet of foot in short spaces. This, along with the short wingspan, is going to make him struggle to get around in NBA rotations I think. There's also the issue of his lower body strength, which is lacking. He's going to get pushed around a lot early in his NBA career. Overall, Zeller will never be a good NBA defender, but if he can minimize the damage he does on that end by improving his lower body strength in the way that Nick Collison did, that would be very beneficial to his career down the road.

Zeller had kind of an up-and-down year with as far as his NBA prospects go. He really got a lot better at some of the things scouts were looking for, including the ability to put on weight and his rebounding. However, his athletic problems were on full display at times this year, particularly against Minnesota and Michigan State - both of whom had athletic front lines. The biggest thing for him is going to be what his standing reach measures out to. If he can measure out to about a 8'11" standing reach, that will probably assuage some of the length fears that people have about him. If he's lower than that, it's going to become an issue.

Personally, I'm not nearly as high on Zeller as many people. I'm not sure that I would feel comfortable taking him in the top ten. The athleticism problem, the strength problem, and the length problem give me pause despite his incredible production in college. I don't expect him to fall out of the top ten, but I would not want to be the general manager that selects him there. He's at least third on my list of centers after Nerlens Noel and Alex Len.

(all stats taken from sports-reference.com, unless otherwise noted.)

At the end of each post, I'll try to rank each of the prospects that I've looked at so far. This will obviously begin to fill in more as the season progresses (therefore meaning more), but now isn't a bad time to start. This isn't meant to be a Cavaliers' draft board (yet), but simply just a ranking of players in a vacuum based on their current tools, potential, and how close they are to making an impact.

-I've removed Isaiah Austin, as he is returning to Baylor for his sophomore season.

-I've also swapped Bullock and Snaer. Bullock just has more potential to guard multiple positions in the NBA, which makes me like him jussttttt a bit more than Snaer.

-Zeller slides in right above Adams and Olynyk because of polish and production, but right below Muhammad. I think Muhammad's ability to score is a lot more transferable than Zeller's because he won't struggle nearly as much to finish against bigger opponents due to his length.