Our goal at Fear The Sword this draft season to provide you with coverage and profiles of every NCAA prospect that we can, along with a few internationals. Next on that list is Mason Plumlee of Duke.

Share All sharing options for: NBA Draft 2013: Prospect of the Day -- Mason Plumlee

Today, we present Mason Plumlee from Duke. Recently, mock drafts have seen Plumlee fall to around where the Cavs' second selection lies, 19th overall. Having been in college for four seasons now, he is something of a known commodity. However, he took some major steps toward becoming an adequate NBA player this past season. 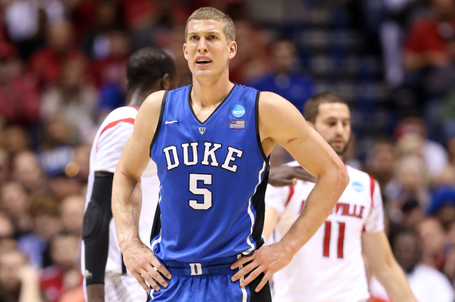 Plumlee is a solid 6'11.5" in shoes, giving him the height to play either power forward or center. Throughout his early years at Duke, he was utilized at both positions, however this season he was used almost exclusively at center. His wingspan is slightly shorter than his height at 6'10", which is problematic. However, Plumlee possesses great athleticism for a seven footer, which should help make up for this deficiency.

While I don't have a definite listing on Mason's vertical, his brother Miles Plumlee of the Indiana Pacers shocked the combine last year with a 40.5 inch vertical leap. Mason has always looked to be the more athletic of the two brothers, so don't be surprised to see something of a similar number if he leaps at the combine this year. That athleticism hasn't helped Miles see the court for Indiana this season, but then again he has always been terrible at basketball. Mason has some of the same awkward athleticism, but he's much more coordinated, and should actually be able to impact the league defensively. 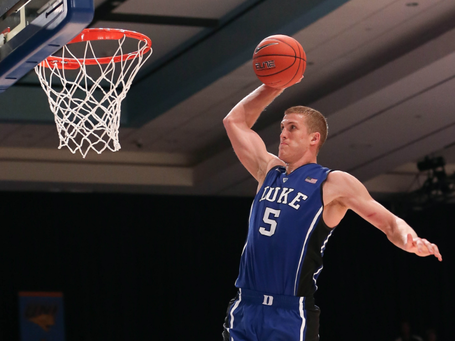 While Plumlee isn't the most coordinated player with the ball in his hands, he has improved in this regard. He's even developed a rudimentary post game, mostly involving hooks in the middle of the lane. This development seems to have occurred because of increased lower body strength, which allows him to now establish and keep post position against most NCAA players.

I'm not sure that will hold up in the NBA though, and he'll need to improve his footwork substantially in order to score in the paint against NBA talent. Where I do think he can be solid is on the offensive boards (top-5 in the ACC each of the past three seasons). Put-backs off the glass and running in transition - he is among the best players in the class scoring in transition -- give him the potential to be an average offensive player in the NBA.

While he did finish consistently efficiently in the NCAA (he shot 60% this year, which was actually his highest usage season), his lack of jump shooting talent will probably catch up to him here. Without the footwork in the post, Plumlee will most likely be forced to learn a 12 foot jump shot to continue to be effective, but he's never even shown the potential to develop that skill. He's probably going to end up being a player who can only take high percentage looks at the rim.

One thing worth mentioning is that he tends to turn the ball over a lot. Only Brandon Davies and Kelly Olynyk turn the ball over more than Plumlee's 3.3 times per 40 minutes. This stems from his very average ball-handling ability and inability to make quick decisions out of the post. He'll need to improve his ball security and decision making in order to be a legitimate weapon in NBA half-court offenses. 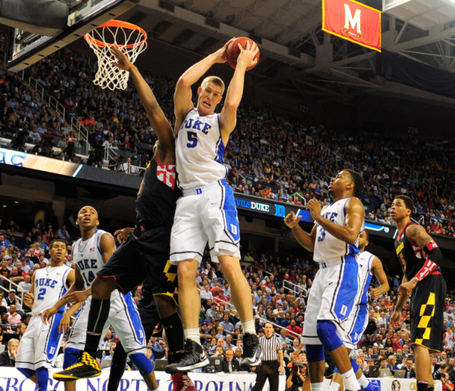 As I alluded to earlier, this is Plumlee's greatest strength. He's an excellent defensive rebounder, who boxes out well and uses his great leaping ability and seemingly large hands to grab loose balls above the rim. This is a skill that should translate to the NBA reasonably well because of his high-level athleticism, although his somewhat short arms give some reason for concern. If Plumlee is to carve a niche in the NBA, this is the most likely place that he can do it. 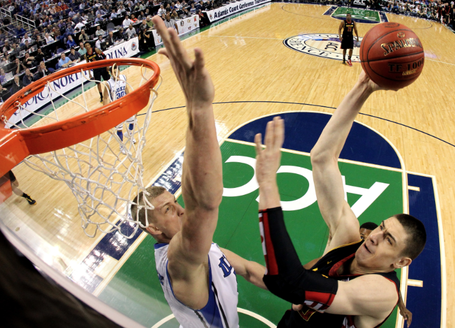 I actually really like Plumlee's defensive potential despite the short wingspan. While he doesn't possess the best lateral quickness, I don't think it's below average either. As long as he can pick up the system, he shouldn't have problems making lane and low post rotations despite his shorter arms.

One difficulty he probably will have is defending in space. During the Elite Eight game against Louisville, he was the target of a lot of pick and rolls by Peyton Siva and Chane Behanan / Gorgui Dieng, where they basically ethered him to the point that he became useless defensively. He'll really need to become better at hedging and recovering on the pick and roll if he's to have a chance defending NBA point guards.

He never really figured out how to use all of his athleticism at Duke on that end, but he was always a strong, reliable defensive post presence there due to his strong lower body, height, and ability to modify shots. Even though he's already 23, I think he still might have some untapped potential on this end because of that athletic ability. Having said that, he's not a particularly great shot blocker, which will probably continue to be the case in the NBA because guys with long wingspans tend to have a greater success rate blocking shots.

I don't think Mason Plumlee is an NBA starting center. Having said that, I do think he has a lot of value as a defensive, energetic rebounder off the bench. He reminds me a lot of Meyers Leonard, who was drafted in the lottery by Portland last year. The reason Leonard probably still goes over him is because of the ability to possibly develop a jump shot (therefore becoming much more viable offensively), but Plumlee might actually be a little bit more athletic. I think his best-case scenario is probably a good Kendrick Perkins-type player who can rebound and play tough interior defense, and his worst case is a more athletic Cole Aldrich, someone can barely get off of the bench.

Should the Cavs Take Him?

As far as the Cavaliers are concerned, I wouldn't be disappointed if they took Plumlee as a backup big at 19th overall. He brings a lot of the things that Tyler Zeller does not, such as rebounding, energy, and decent low-post defense. If he drops to 19, I'd say he's definitely in the mix among centers like Steven Adams, Olynyk, Jeff Withey, and Lucas Nogueira, and it's possible he's the best of the bunch.

-I've swapped Adams and Olynyk, because I'm starting to feel a bit more concerned about Olynyk's lack of bulk and strength. He might not be able to play center in the NBA, and he's definitely not going to be able to defend them.

-I've placed Plumlee right below Adams. Adams is really raw, but he's already a much better defender in space and probably equally as good on the interior. However, Plumlee is a much better rebounder with better hands. Ugh. I'm going to go back and forth and these two about 18 times before the draft.