Our goal at Fear The Sword this draft season to provide you with coverage and profiles of every NCAA prospect that we can, along with a few internationals. Next on that list is Jamaal Franklin of San Diego State.

Share All sharing options for: NBA Draft 2013: Prospect of the Day -- Jamaal Franklin

Today, we present Jamaal Franklin of San Diego State. Franklin's an interesting prospect because of his versatility, motor, and toughness. After winning the Mountain West Conference's Player of the Year award in 2012, Franklin replicated his numbers again this season, averaging 17 points and 9.5 rebounds per game, along with 3.3 assists. He played kind of a combo-forward/small forward role at San Diego State, but will most likely be asked to play shooting guard in the NBA because of his size and athleticism. 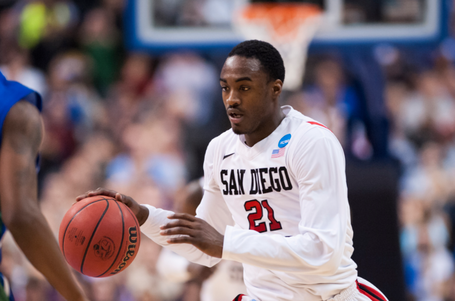 Franklin stands about 6'5" with a 6'11" wingspan. He's also added about 40 pounds to his frame since high school, now weighing 205 pounds, meaning he has pretty much a prototypically NBA-ready body for a shooting guard. He's a really good athlete, with great leaping ability and solid quickness. His basketball IQ is off the charts, but in my opinion his best attribute is his motor. Franklin is tough and never quits working on the basketball court. 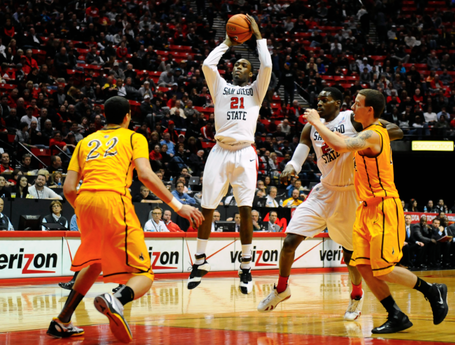 That toughness and motor are on full display on the offensive end, where he relentlessly attacks the defense with his great first step and length, which allows him to blow past a lot of collegiate defenders. He's got a pretty good midrange game, but mostly ends up driving into the lane. Once in the lane or the rim, he shows a really good ability to find high percentage looks. Franklin converts 61% of his attempts at the rim, but his best quality is his ability to draw contact. Franklin ended up at the line 8.1 times per 40 minutes, where he shot 78%. This might be his most NBA-ready skill right now, as he's something of a jack-of-all-trades, master of none at the offensive end of the floor.

In that vein, he's already a pretty good playmaker, who finds great passing lanes and excels finding cutters to the rim. He averaged about four assists per 40 minutes. However, due to his all-encompassing role within the San Diego State offense, he also turned the ball over at an alarming rate of four times per game. These turnovers tended to come from trying to do a little too much within the offense, or trying to make the perfect pass. I think there's a chance that problem goes away in the NBA when his role won't be so large, but it's worth mentioning.

Turnovers aren't his biggest roadblock though to becoming an NBA-caliber shooting guard. Franklin is a bad shooter from distance who still takes 37% of his shots from beyond the arc, according to hoop-math.com. He only made 27% of his 4.6 three point attempts per game this season. He doesn't seem to elevate off the ground well when he shoots, and his release point kind of wavers from way over his head to right in front of it. He'll really need to start becoming a better spot-up shooter - which Chad Ford says he's working on - in order to become a better role player in the NBA. 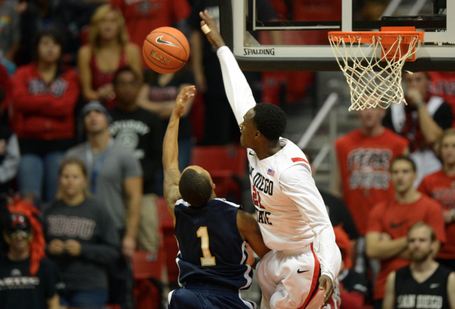 Franklin also has potential to be a fantastic wing defender due to his high work level and athleticism. At San Diego State, he was asked to guard at least three different positions (SG, SF, and PF), giving him not only the versatility, but also the toughness to defend guys who are bigger than he is. Sometimes he's a little overanxious and gets beat off the dribble, but that seems like more of a youth thing that he'll learn to minimize as he gets older. He also forces a lot of turnovers, finishing second in the Mountain West in blocks plus steals with 2.4 per game.

His most eye-popping statistic though is that he's a fantastic rebounder for a potential guard, averaging 11.2 rebounds per 40 minutes. He actually led the Mountain West in defensive rebounding with 7.8 per game. He'll be an excellent rebounder for a guard in the NBA, and between this, his versatility defensively, and his length I think he can actually play small forward in the NBA at times (he measured just over 6'5" with a 6'11.25" wingspan at the combine -- excellent numbers). Overall, I love Franklin's defensive potential. Due to the fact that he'll probably be forced to focus more on this end of the floor than on the offensive end in the NBA, Franklin has potential to become a great defensive player once he starts exerting his energy here.

Franklin is one of my favorite prospects in this draft not only because he wears long sleeves on the court, but also because of how hard he plays and his versatility. Unfortunately, that doesn't necessarily mean great things for his potential draft stock. The inability to improve upon his long-range shooting really leaves doubts in my mind as to whether or not he can play shooting guard in the NBA. But if he learns that shot, then he has potential to be a Paul George -lite type of player who tenaciously D's up and can shoot from distance. His best-case scenario is probably that or a Tony Allen -type player who uses his athleticism, basketball IQ and crazy motor to become a defensive dynamo on the perimeter. But because he still can't shoot, he could easily turn out to be an Alonzo Gee-type player that is a slightly above-average defender who can't shoot and scores inefficiently. Pretty big range of possibilities for Franklin.

Should The Cavs Draft Him?

Probably not. They don't need a shooting guard, and they already have Alonzo Gee who doesn't provide and perimeter scoring threat from the small forward spot. I love the way Franklin plays and I'd love even more to see what Mike Brown could do with him defensively, but most likely I'll be watching him from afar next season as he suits up for someone else.

Notes: -I was all ready to switch Plumlee with Adams again, then Adams went nuts at the combine today and looked fantastic, so I decided to keep it. Once Plumlee ends up with like a 40 inch vertical tomorrow at 6'11", I'll probably flip-flop them again. They're the two closest prospects on my board.

-Franklin slides in ahead of Olynyk on the general board, because I love the way he plays. He's a little bit better than Bullock in my mind because I think he's a little more athletic and has better defensive potential. Plus the production is just better. However I do think Bullock would be a better fit for the Cavs and would be ahead of him on a Cavs-specifc draft board.