Our goal at Fear The Sword this draft season to provide you with coverage and profiles of every NCAA prospect that we can, along with a few internationals. Next on that list is Gorgui Dieng of Louisville.

Share All sharing options for: NBA Draft 2013: Prospect of the Day -- Gorgui Dieng

Today, we present Gorgui Dieng of Louisville. Dieng was possibly the most important piece of this season's NCAA champion Louisville Cardinals. His first name is somewhat apropos in this draft. "Gorgui" means "the old one" in Wolof, the native language of Senegal. At 23 years old, Dieng is certainly an old early entrant into the NBA draft. Along with being named to the First-Team All-Big East, he was also named the Big East Defensive Player of the Year. 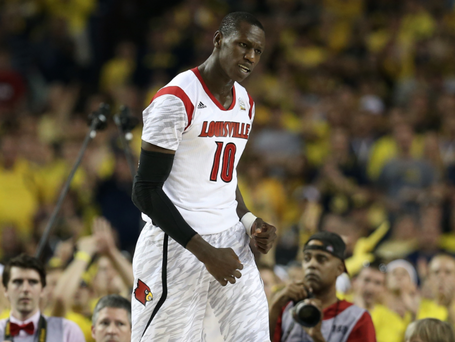 Dieng stands in at 6'11" with a 7'4" wingspan, which looks even bigger on tape. He's about 230 pounds, having put on about 30 pounds since leaving Huntington Prep in West Virginia (same school as Andrew Wiggins). At the combine, he had the second-highest standing reach of anyone measured behind Rudy Gobert. He's very agile, moves well in space and laterally, and has some pretty decent leaping ability. He's also got pretty good stamina for a center, as he played nearly the full game on multiple occasions for the Cardinals. 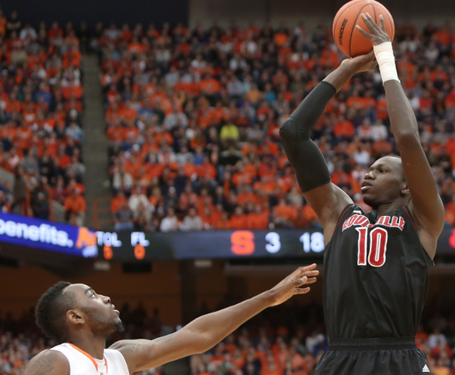 Dieng's got some potential on this end, but it's not particularly due to his post game. It's a pretty rudimentary, and he showed absolutely no left hand after breaking it earlier this season. He does have a pretty good touch around the rim - he shot about 72% at the rim this season according to hoop-math.com -- but his footwork seems slow and his instincts don't seem entirely natural from the low block. He can't really get his own shot when posting up a defender because it's easy to anticipate his only consistent move: a dribble into a right-handed hook shot from about 6 feet. It worked in college because he was longer and more athletic than other big men; but in the NBA everyone will be his size, therefore he will need to diversify his post game.

Where he does show a lot of potential offensively is from the high post. First off, he's an extraordinary passer. While surveying and looking over the defense with his height, Dieng hits cutters at the rim and easily finds the open three point shot as the defense collapses around him. To top it off, he's shown fantastic potential as a set shooter from 14-17 feet. He has a high release point that makes it near impossible to block with excellent, consistent mechanics -- he keeps his right hand directly under the ball and his release point is very consistent. 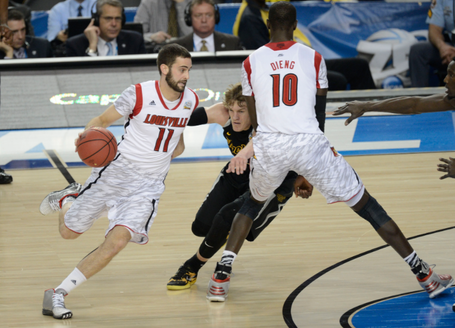 Finally, this is a small thing but it's worth mentioning: Dieng is an excellent screener. He was the catalyst for springing Peyton Siva free in Louisville's pick-and-roll-heavy offense innumerable times. He sets a super wide base with his long legs, making it difficult for defenders to get around him. He's not great at rolling to the hoop yet, but he could be an excellent candidate for pick-and-pop plays with his jump shot.

Dieng is a solid rebounder who improved each of the last three seasons. One way that he should be able to get quick buckets around the rim is as an offensive rebounder, as he finished second and third over the past two seasons respectively in the Big East in offense rebounding. He's also a pretty solid defensive rebounder because of his superb motor and great length. He attacks the ball above the rim and has soft hands that allow him to secure the ball. He finished second in the Big East in Defensive Rebound Percentage and in overall rebounds per game, at 9.4 per game. 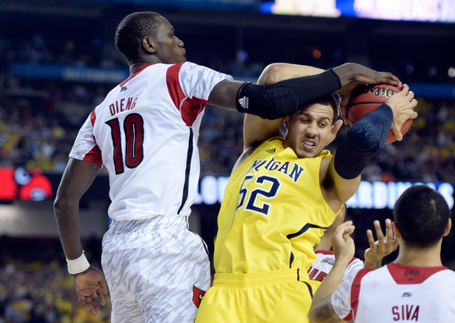 Dieng is one of the best defensive big men in this draft. He's truly one of the guys in this draft that can affect a game without scoring (see: Final Four game versus Wichita State). As the true anchor of the Louisville defense, which finished number one in Ken Pomeroy's adjusted defensive rating, Dieng was the last line of defense in Louisville's aggressive press defense. His defensive rating is a full five points better than any other Louisville player, meaning his presence was clearly the catalyst for the Cardinals' second half turnaround defensively (after returning and healing from his wrist injury).

Even though he's a bit skinny, he's already a solid rim protector because of his length and athleticism. He knows how to defend shots by going straight up and down, allowing his length to affect the opposition's shot. With his great in-lane agility, he's also great at rotating over and becoming a weak side shot blocker, which is where most of his nearly 3 blocks per game over the past two seasons have occurred. He can get into foul trouble from time-to-time, having fouled out eight times in the past two years and averaging nearly three fouls per game over the last two years. However, this year he took a big leap forward, averaging only 3.1 fouls per 40 minutes.

Within pick and roll situations, Dieng is pretty good at hedging out and recovering back to his man. He doesn't have any problems guarding quicker opponents in space, and should continue to improve upon this as he gains more experience. His instincts seem to be stronger than most NCAA players in these situations. Half of the battle for young NBA big men is making these movements secondhand and instinctual, and Dieng already looks comfortable hedging.

Finally, he has a superb motor. It's not uncommon to see him flying and diving on the floor for loose balls five times a game. He never gives up when closing out on shooters, and makes shots difficult for jump shooters with his length and athleticism.

I'm very high on Dieng and think that he's a rotation player in the NBA right now. While he doesn't have the agility or hops of a Nerlens Noel, he does have the same high-level instincts that elite defensive players do. If he can just get a little bit stronger, he could be an excellent NBA defender for a decade in the NBA. I'd happily take him at the end of the lottery and take at worst a solid defender off the bench. With his high post offense and solid all-around defensive game, he has potential to become a Marc Gasol -lite type of player. I think he ends up turning into a solid, top-15-20 center in the NBA.

Should The Cavs Draft Him?

If by some fluke he falls to 19th overall, I absolutely think the Cavaliers should take him - assuming that they don't end up with Nerlens Noel. Having said that, I don't actually think that they'll be able to land him at 19. Depending on the price, I don't think I'd be opposed to moving up to grab him if he's sitting there around 15th overall. Because of his IQ on that end, plus length and athleticism, I think that he can be one of the few immediate impact defensive rookies in the NBA.

Notes: -The big surprise here is that I have ranked Dieng ahead of Zeller. I like the certainty of skills that Dieng has, whereas I really am not sure that Zeller has anything that certainly translates to the NBA. I'm worried about his ability to finish over big, physical defenders, plus he's not anything special at all defensively.