The NBA Draft Lottery is tonight. Here's the odds for who's likely to win and how to watch the lottery tonight on TV.

It's that time of year where Cavs' fans cling their hopes to a bunch of ping-pong balls landing in the proper order! Don't be that person who misses seeing the Cavaliers get their third first overall pick in the last 11 years.

Who? The 14 NBA teams who didn't make the playoffs.

Where on my eyeballs? ESPN / WatchESPN.com

The Cavaliers can end up selecting anywhere from 1-6 on June 27, depending on how the balls fall tonight. Despite ending up with the third best chances at the top pick (at 15.6%), the Cavaliers still only have a 46.9% chance of landing a top 3 pick. Their most likely landing spot is actually the 5th selection overall, at 26.5%.

In fact, the third spot in these proceedings has the least reliable predictable indication of a landing spot, as the top-5 picks all have somewhere between a 15.6% chance and a 26.5% chance. That means you can expect the unexpected tonight when Dan Gilbert's son Nick takes the stage for the third time, The first time he took the stage, Kyrie Irving ended up as a Cleveland Cavalier, so hopefully the team has similar luck this time

Here is a full chart explaining the different draft probabilities (as taken from Sports' Illustrated on Monday): 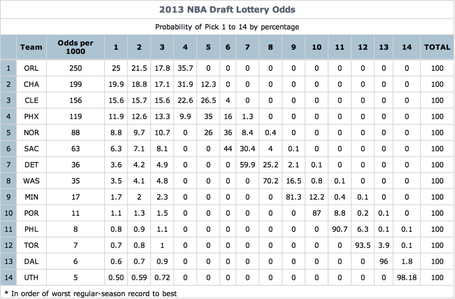 We'll have an open thread for the lottery just as we do for games here at Fear The Sword, so stay tuned for that. It's an exciting time, and we should have a lot of really cool stuff for you guys this week after we actually know the order of picks.