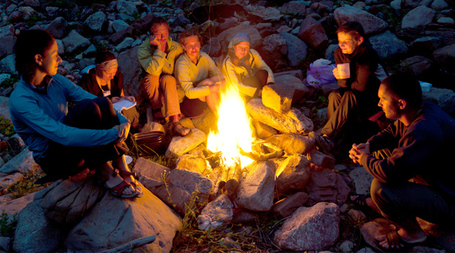 Everyone relax and take a seat around the fire. Old man Witmi is going to explain what the Cavs winning the lottery means for our beloved Cavaliers. It’s going to be a bumpy ride, at one point, Aviate and Vottomatic are going to try and kill me, but if we stick together we’ll get through this.

Anything else you see or hear will be nothing more than a smoke screen generated by Chris Grant.

At one point 2 years ago, some people were convinced we would take Derrick Williams, he was never seriously considered. 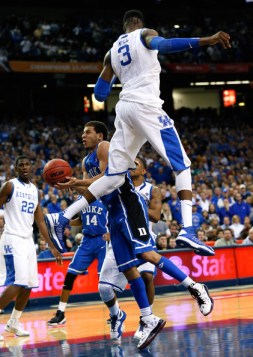 #2. The Cavs will not trade the pick for DeMarcus Cousins, or anyone else. The advantages of the rookie wage scale will trump the allure of any existing veteran. I think we should listen long and hard if we get offered Demarcus Cousins, but Demarcus is going to get paid serious money in about a year, the Cavs will opt to preserve their cap space. I do not know if this is the best idea, but I assure you, this will happen. Old man WitMi sees far and true.

If Nerlens is the defensive player we believe he will be, TT is not a good fit beside him. The Cavs should explore moving TT for a stretch 4, immediately. The Cavs will need a PF that can move out of the paint and still score or the lane will constantly be clogged for Kyrie and Dion. We all love, TT, I love TT, we should play him for another year to show improvement, then move him for a piece that better fits our future roster. I know everyone will hate this, but it’s the best course of action. Memphis’s defensive minded front court only works because both Gasol and Zbo have really solid offensive games. Gasol steps out to the free throw line and hits that set shot an incredibly high % of the time. ZBO is an incredible low-block player. Tristan is none of these. If TT is smart, and I like to think that he is, he is currently shooting 1,000 jumpers a day trying to develop a midrange shot. His spot on this roster depends on it.

#4. The Cavs are now a serious contender for the Lebron James sweepstakes in a year. Until last night, I never seriously entertained Lebron returning. Not once, not seriously at least. Now, with 2 #1 picks at opposite ends of the court, this Cavs team is now a very attractive option for Lebron, as he would fit the existing roster perfectly. With one existing elite option at PG, 1 potentially elite option at center, and an above average SG, the Cavs have the best young roster in the NBA.(Yeah I said it) I thought Nerlens was the Cavs only shot at possibly attracting him back here, I now believe this is possible. I am not saying likely, but it IS possible.

#5. The Cavs will resign Ellington, then trade for a player, or spend at least 8 million in free agency this summer. I can’t predict who, but we will make significant additions to the back end of our roster. We will now start to pay role players who can legitimately contribute off of our bench. There is a lot of value on the cheap available, and the Cavs will begin to make their surge into the post-season.

#6. Nerlens will look awful for the first two months he plays. I mean really awful, he will not know where to stand or what to do, and he will get bullied by bigger players. Analytics will post 3 times a day about how we should have taken Otto Porter, who will win rookie of the year with the Wizards. The last month of the season and into the playoffs, Nerlens will shine as a weak side defender. Nerlens ability to defend the rim is absolutely incredible; I don’t understand why everyone is losing sight of this.

He will be able to block shots right away in the NBA.

This portion of his game will not take years to develop; he will alter shots immediately in the lane. As he matures over the next few years, the Cavs guards will simply need to funnel opposing guards towards him, the effect this will have on our defense cannot be stated enough. When Mike Brown gets his hands on this kid, he is going to turn him into a perennial all-NBA defender. He is THAT good defensively. Offensively he is athletic enough to eventually physically dominate matchups. He will be good on the pick and roll and will dunk a lot.

#7 As a side note, reports out of Kentucky is that Nerlens is a really good human being. There are dozens of stories of him working with sick kids and taking time to help charities. College kids don’t have to do this, are not expected to do this, and they rarely do. He comes from a well-grounded hard-working immigrant family from Haiti. You don’t hear stories about Nerlens having character issues; Chris Grant values these types of players. 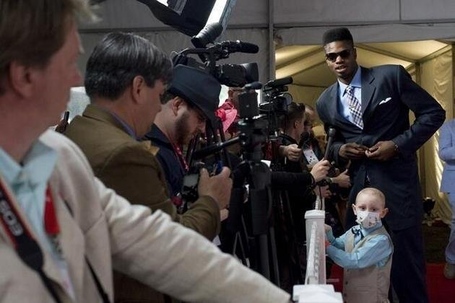