NBA Draft 2013: What Roy Hibbert and the NBA Playoffs teach us about Nerlens Noel

Why does protecting the rim matter, and what does it mean for the Cavs' first overall pick?

Share All sharing options for: NBA Draft 2013: What Roy Hibbert and the NBA Playoffs teach us about Nerlens Noel

In an article on about Roy Hibbert, Grantland's Kirk Goldsberry illustrated the importance of why rim protection matters as it pertains an NBA defense. There, he articulates how it is no coincidence that Hibbert has led the Pacers to one of the defenses in the NBA.

Hibbert significantly reduces his opponents' overall scoring efficiency on a nightly basis. I evaluated a set of thousands of NBA close-range shots in which an NBA big man was protecting the basket. These were shots from the 2012-13 regular season in which a qualifying interior defender was within 5 feet of the rim and also within 5 feet of the shot location.

In such cases, the opponents made 48 percent of their shots. When Hibbert was protecting the basket, however, the number dropped to 38 percent. Only one player in the NBA reduced close-range shooting efficiency more than Hibbert; of course, that was LARRY SANDERS !, who held opponents to a ghastly 32 percent. For context, both Marc Gasol and Tyson Chandler - the last two winners of the NBA Defensive Player of the Year Award - held opponents to a respectable 44 percent.

So you may be asking yourselves why this matters to the Cleveland Cavaliers? Without access to SportVu technology, we're going to have to do this in a bit of a rudimentary way, but it should still be effective.

This season, the Cavaliers, with no bonafide interior presence, allowed opponents to shoot 67% at the rim this season, which is about 2.5% worse than league average. That was good for 27th in the NBA. The three teams ahead of them: Sacramento, who had DeMarcus Cousins manning the middle; Minnesota, who was without Kevin Love for much of the season and had Nikola Pekovic in the middle; and surprisingly the Knicks, who of course had Tyson Chandler. The first two make sense, but how did the Knicks end up so poorly if Chandler only allowed opponents to shoot 44% at the rim? 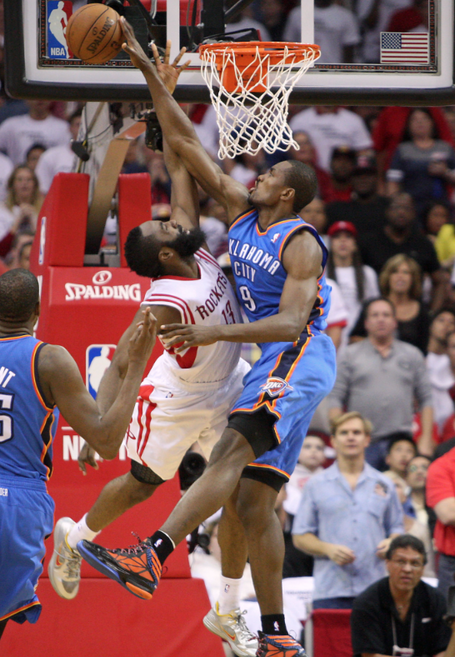 Now, when we look at the best teams in the NBA defending the rim, we find exactly what you'd expect. Indiana finished first here at 59.1%, followed by Denver, San Antonio, Oklahoma City, and Milwaukee. Unsurprisingly, four of these five teams feature an elite shot blocker or rim protector in Hibbert, Tim Duncan, Serge Ibaka, and Sanders. The fifth team features a combination of JaVale McGee and Kosta Koufos. While JaVale makes terrible, awful decisions from time-to-time (okay, a lot of the time) defensively, he's still actually proven to be really tough to finish around at the rim (when he's there). Opponents shot 54% at the rim while JaVale was on the floor this season, or 4% worse than when anyone else was on the floor at center for the Nuggets.

Now the question becomes how does protecting the rim affect actual defensive performance. The four best defensive teams in the league this season according to defensive rating were Indiana, Memphis, San Antonio, and Oklahoma City. Three of those four teams were in the top five in the NBA protecting the rim, and the other has Marc Gasol allowing 44% shooting while defending the rim. Denver and Milwaukee both had slightly above average defensive ratings. 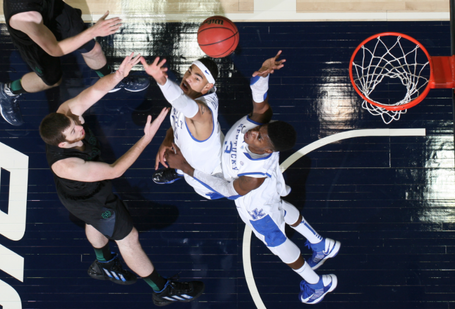 While allowing for other factors, it is clear that building a defense from the inside out is one of the best paths to creating a defensive power. So how does Nerlens Noel fit into that? Well he's very clearly the best shot blocker in the draft, and possibly the best one to come along in a while. As a freshman, Noel finished 6th in the NCAA in total blocks at 106, despite missing Kentucky's final nine games, or about 27% of their season. Had he qualified for it, Noel would have led the NCAA in blocks per game by nearly half a block. He did all of this as a 18 year-old.

Blocks weren't the only thing he was responsible for though. While on the floor, Kentucky's defensive rating was 81.9. This is nearly 10 full points better than Kentucky's next best player in that statistic, Willie Cauley-Stein at 91.1. Had Noel been eligible, he would have finished 5th in the NCAA in defensive rating, despite Kentucky's defense finishing 77th in the NCAA according to KenPom.com. There was a clear drop off after Noel left, meaning he was literally carrying their defense to respectability.

With a shot-blocking, rim-protecting, defensive dynamo at the top of the draft, the Cavs really should have an easy decision at the top of the draft. Remembering that this player is entering his 19 year-old season, that decision should be even simpler. Due to Mike Brown's hire, the intention to build a defensive team is clear. The Cavs should make it even clearer, and take the best, most complete defensive player in the 2013 draft.

That player is Nerlens Noel.