The Cavs have found a new offensive assistant to pair with Mike Brown in Igor Kokoskov, previously with the Phoenix Suns.

The Cavaliers have hired Igor Kokoskov as an assistant coach, according to Paul Coro of the Arizona Republic.

Kokoskov will join Mike Brown's new coaching staff in Cleveland as an assistant coach. New Suns coach Jeff Hornacek just has begun assembling his new staff after getting the job this week but Kokoskov had to make a decision on Brown's offer and chose to join him after five years with Phoenix and 13 years in the NBA.

Kokoskov is considered an offensive coach, and he was in charge of handling the Suns' offense after Lindsay Hunter took over in Phoenix. I imagine he will be doing much of the same under Mike Brown for the Cavaliers. He was the first full-time non-American coach in NBA history when he took a job with the Clippers in 2000.

The Serbian-born Kokoskov is also the head coach of the Georgian National Team, who have qualified for the European Championships for the first time in 2011 and 2013 under his guidance.

The Cavaliers themselves have not confirmed the hire, according to Bob Finnan, but are seemingly just waiting until the coaching staff is complete to introduce them. They have also hired Phil Handy of the Los Angeles Lakers as a player development coach and retained Jamahl Mosley from Byron Scott's staff.

And to top it all off, he has a smoking hot wife. 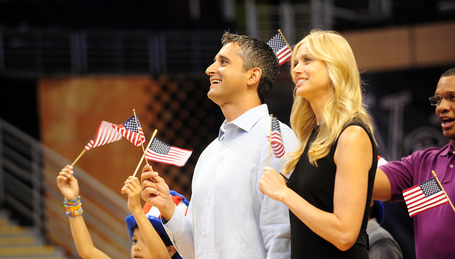