The Cavaliers made some noise in the NBA Draft last night. Now it's time to meet your new players.

Has everybody settled down after the selection of Anthony Bennett with the first overall pick? Did you guys already forget that Cleveland also selected Sergey Karasev and Carrick Felix? Well, it's time to meet them. The Cleveland Cavaliers will introduce their new players at a press conference today at approximately 1:30 PM Eastern.

You can watch the press conference LIVE here.

These things usually have pretty bad quality, but hey, it's only 2013.

Karasev will not be there because he had to catch a flight right after the draft last night. He has another game to play with his team in Europe. Anthony Bennett, however, will be there. I believe Carrick Felix will be there as well. I have no reason to suspect otherwise. 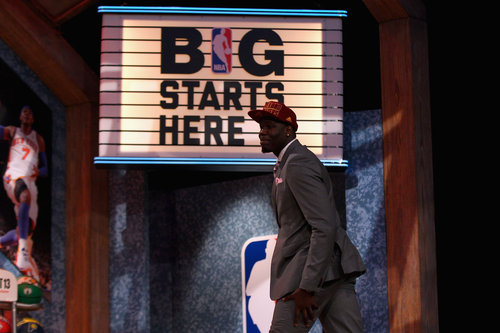 The selection of Anthony Bennett surprised a lot of people. I tried to understand what the Cavs were thinking.

We'll get a chance to hear Mike Brown and Chris Grant talk about the players that they drafted and maybe we can answer some of the questions that I posed in my article earlier today. We also might find out what numbers these guys will wear. Bennett has already took to Twitter to ask Cavs fans what number he should wear.