I just figured that this is something worth mentioning, in case you've forgotten. Andrew Bynum when healthy is one of the best centers in the NBA, and here is why.

Andrew Bynum is almost never healthy. Heck, he probably won't ever be completely healthy again. But we're going to suspend reality for this post. We're going to forget last season ever happened. We'll forget about that whole Andrew Bynum injury situation. And the bowling accident. And this. Oh, and this. Probably this, too. In fact, let's just get in a make-believe time-machine and go back to the 2011-12 NBA season.

Back in those days, Bynum was nearly atop the heap of NBA centers as a Los Angeles Laker. One could even make the argument he was the second-best center in the NBA that year. Upon averaging 18.7 points, 11.8 rebounds, and 1.9 blocks per game, Bynum could have become the future of what the Lakers are now scrambling to find. Instead, they chose to go in the direction of Dwight Howard, who spurned them on July 5 for the Houston Rockets. It's quite an interesting "what-if" scenario had the Lakers simply kept Bynum, but that's not the purpose of this piece.

What I want to explore in this piece is what Andrew Bynum actually does on a basketball court when healthy. And honestly, there isn't a whole lot more you could ask for from a seven-foot center.

You can't expect Bynum to become a weapon in the pick-and-roll; it just isn't what he's good at. However, he's excellent at finding open space whenever the other big does screen. Bynum finished in the top 1% of all players in Synergy's database in scoring off of "cuts" (shooting 78% on 172 attempts) because he has excellent hands and great feet that allow him to finish quickly. Cutting is something of a misnomer here. Bynum obviously doesn't cut in the traditional sense of sprinting along the baseline in order to get open at the rim or finding a backdoor lane. However, one of his best skills is finding the soft spot in the defense within seven feet of the rim and sitting down there until someone finds him. 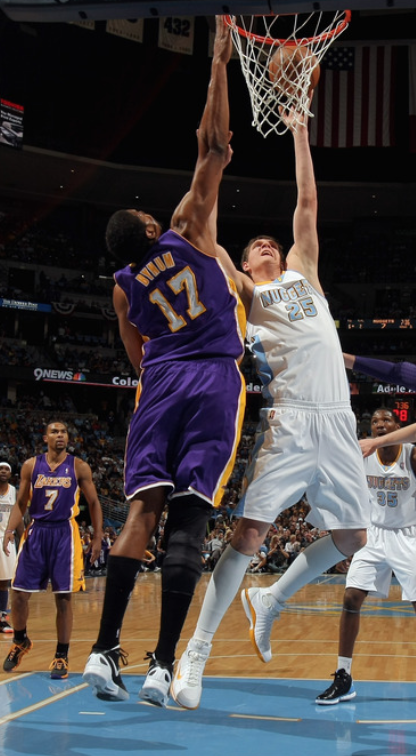 What a lot of people don't know about Bynum though is just how good he is defensively. The two blocks per-game is a nice round number that shows rim protection, but that number pales in comparison to amount of shots he's capable of altering because of his enormous wingspan and solid mobility.

Mainly we're going to focus around the rim, where he'll give the Cavaliers a sense of protection that they've been lacking since the broken down corpses of Shaquille O'Neal and Ben Wallace moseyed on through Cleveland before finishing their careers. First, he's strong enough to hold his own against post-up maneuvers (opponents only scored on him 36% of the time in the post for a .7 points-per-possession mark). No longer do the Cavs have to worry about Tyler Zeller getting muscled by every center in the NBA.

Also, he's very Roy Hibbert-like in his ability to go straight up and down when players drive into the paint, which helps him avoid foul calls (averaging under two fouls per-36 minutes as a center is difficult in the NBA, and Bynum did it). Being seven feet tall with a 7'3" wingspan automatically makes you difficult to finish over, and Bynum knows exactly how to utilize it. Rim protection both on drives and against NBA bigs may have been the single biggest issue that plagued that Cavaliers last season, and that's saying a lot considering they lost 58 games.

So, by suspending reality I think that's a pretty adequate picture of what Andrew Bynum can bring to the table. But now we have to be realistic for a second. There's a distinct possibility that even with help, Bynum can't bring all of these things back after his injuries. He may simply be done after the years of knee damage. But if he does figure it out, and if he does become this guy again, the Cavaliers can easily make a run at the playoffs next season, and possibly even make noise upon arriving. Bottom line: it may be unlikely to workout, but the potential reward could be tremendous.