NBA Free Agency: Oden Watch! Has the dream ended for the Cavaliers?

Greg Oden is the next most popular center on the market. Has the Andrew Bynum signing knocked them out of this race?

Share All sharing options for: NBA Free Agency: Oden Watch! Has the dream ended for the Cavaliers?

One would think that the signing of Andrew Bynum, along with the presence of Anderson Varejao and Tyler Zeller, would end Greg Oden Watch 2013 for the Cavaliers. Well, to quote Lee Corso:

NOT SO FAST, MY FRIEND!

ESPN's Marc Stein is reporting that the Cavaliers are still one of four teams Oden is considering, along with the Spurs, Heat, and now Mavericks. No, really. I'm not kidding. I have proof.

Hearing: Dallas Mavs will get "legit consideration" from Greg Oden along with teams previously in his top three: Heat, Spurs and Cavs

Okay, so this says nothing about the Cavaliers ACTUALLY still being interested in the NBA player who in years past could easily have been the star of the sequel film "16 Going on 60" as Jennifer Garner's long lost orphan brother. But I love the fact that Oden is still interested in coming here. Given his collegiate connections to the state and the awesome times he had nearly winning an NCAA championship, it would be an excellent surrounding for him to get comfortable as he continues to recover.

I can't see the Cavs, actually being interested in Oden at this point, and this entire saga may have ended. But come on, man. If Oden can be a Belieber, I can be a believer in his eventual return to the Buckeye state suiting up for the Cavs, right? 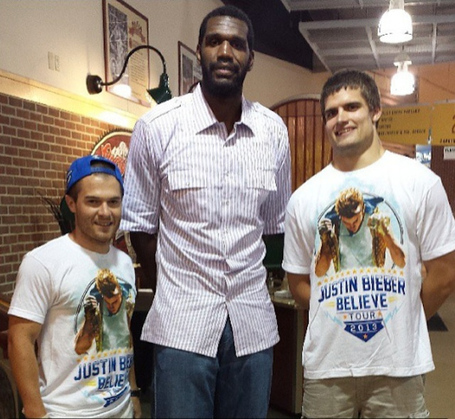 (Special thanks to Deadspin for this awesome, awesome picture)