Tristan Thompson took a huge leap forward in the second year of his career. Now, he's working even harder to make a similar leap in his 3rd season with the Cavaliers.

Tristan Thompson had a rough rookie season on the offensive side of the ball. He has tremendous physical gifts, but he was quite raw when he first entered the NBA. Over the course of his second year in the league, he made consistent improvements and ended up raising his PER from 13.3 to 16.1 from his rookie to sophomore seasons.

As he enters his third season with the Cavaliers, Thompson is working harder than ever to establish himself as an offensive weapon. There have been rumors about Tristan supposedly switching from shooting left-handed to shooting right-handed. I had been unable to confirm the rumor that Tristan has been working on his jumper and free throws right-handed prior to seeing Tristan working out on the UNLV campus this week.

After one of the Cleveland Cavaliers' Summer League games, I asked coach Jamahl Mosely about Tristan and he wouldn't give me anything specific. All he was able to tell me was that Tristan has been working hard:

I thought it was a little strange that Mosley wouldn't directly respond to the idea that Tristan had been working on switching to shooting with his right hand instead of his left. This leads me to believe that nothing is set in stone. Maybe Tristan is just experimenting with both and will continue to do so before the season starts. He certainly has time to see which one he's most comfortable with and then commit to one hand once they start playing real games.

During Anthony Bennett's media availability on Tuesday afternoon, Tristan was in the gym working on his game. He looks to be in tremendous shape and was the only guy out there still working with Cavaliers coaches. I didn't get to see Tristan shooting jumpers or anything or showing off the increased range that he has supposedly been working on.

Cavs fans are going to be very surprised by the development of Tristan Thomspons this year. Improving range, post moves, & getting stronger.

What I did get to see was Tristan Thompson shooting free throws...right-handed. It was fairly clear that he wasn't just messing around after a hard workout session. He was sincerely focusing and attempting to perfect his free throw stroke with his right hand. It's hard to tell if shooting right-handed will help him increase his FT% significantly or allow him to knock down midrange jumpers -- but his free throw mechanics looked much more fluid now that he was using his right hand rather than his left. 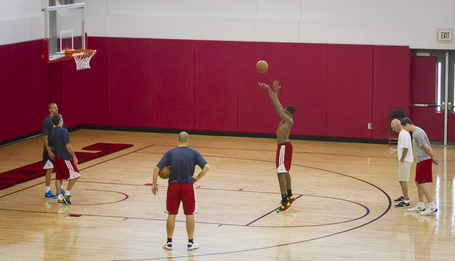 I wasn't able to talk to Tristan directly, so I guess we'll have to wait until training camp to find out how serious he is about making the switch. Last year he already improved his free throw shooting to 60.8% after shooting 55.2% in his rookie year. Maybe he can continue improve that number by smoothing out his mechanics with his left hand. But if he's switching to his right hand, that's pretty cool. I'm almost certain that no player has ever just switched which hand they shoot with after two years in the league. Then again, Tristan is still just 22 years old and if switching hands is what it takes for him to make a bigger impact on offense, then I'm all for that.