The Cavaliers have made their first big splash in free agency. Here's some initial evaluation of what the deal with Jarrett Jack.

The Cleveland Cavaliers finally made a substantial move. Chris Grant promised that the front office would be aggressive this offseason. Before Saturday, Cleveland fans didn't see much of this promise in action. The Cavs acquired Earl Clark, but his 2 year, $9 million deal isn't a whole lot to get excited about. That changed on Saturday afternoon when news broke that the Cavaliers had reached an agreement with Jarrett Jack on a 4 year, $25.2 million deal.

The reported deal with Jack pays the veteran guard just over $6 million per year and has a team option (or at least partially guaranteed) on the fourth and final year. When I first saw the reports, I'll admit that it looks like too much money for Jack. Despite the fact that he was one of the leading candidates for 6th Man of the Year (and, in my opinion, probably should have won over JR Smith), he's still likely a bench player. It's a little unusual to think that a backup point guard would get over $6 million a year and almost $20 million in guaranteed money. But upon further review, it's pretty reasonable.

As David has outlined in this article, the addition of Jack doesn't really hinder the Cavaliers' flexibility. Obviously adding any guaranteed dollars to their cap is going to take away some opportunities, but the Cavs still have plenty of room to maneuver before the salary cap becomes a concern. They still have the ability to sign a backup big man if that's the route they want to go down. They still have the ability to work a big trade or take back bad contracts in an effort to get further draft picks or other assets. The fact that the fourth year is a team option means the Cavs can get out of the deal early if things go south. There is some concern in the fact that Jarrett Jack is 29 years old and will be 30 in October. However, I believe this deal is one that is fairly easily traded. If it got to the point where the Cavs needed to trade Jack and clear more cap space, it shouldn't be too difficult to trade Jack. Even in the third year of his deal, when Jack will be 33, he'll likely be a capable backup guard and veteran presence. For example, it's hard to see a situation where Jack goes downhill as quickly as Gerald Wallace in recent years. And even if that happened, a $6 million salary shouldn't be too hard to deal with.

Overall, it's not exactly a bargain -- but it's not an egregious overpay either. If you figure that the Cavaliers have to pay a little extra to get free agents to come to Cleveland, it's fine. Add in the team option and it's pretty much as good as you could expect.

How Jarrett Jack helps the Cavs

I assume that this is what you actually want to read about, not contract analysis. First of all, I think Jack is more than just a backup point guard. Coming into the season, we wanted a veteran point guard to back up Kyrie Irving. With Jarrett Jack, the Cavs got that and a lot more. Last season with the Warriors, he played as more of a 6th man/combo guard behind Klay Thompson and Stephen Curry. Despite coming off the bench, Jack played 29.7 minutes per game. In that time he scored 12.9 points and rack up 5.6 assists per game. More notably, his minutes per game jumped all the way up to 35.5 during the Warriors' playoff run. Jack was one of the Warriors' most valuable players in the playoffs, scoring 17.4 points per game and posting a PER of, wait for it, 17.4. Oddly enough, the Warriors were betting with Jack off the court than with him on the court during the playoffs. The biggest part of that was that the Warriors seemed to improve fairly significantly on defense when Jack on the bench. They were 5.7 points per 100 possessions better defensively without Jack in the playoffs. I'd have to ask some more Warriors fans and writers if that's a significant thing or if it's just the result of flukey small sample sizes. From what I remember, the Warriors did much better with Klay Thompson guarding Tony Parker than with Jack guarding him. Nevertheless, he certainly added value to the Warriors over the course of the season.

The Cavaliers are hoping that he can bring many of the same things to Cleveland. Like Golden State, the Cavs believe that they have their backcourt of the future in Irving and Waiters. It's assumed that Jack will be coming off the bench, but to call him a backup point guard is selling him short. As you can see, he played far more minutes than your typical backup and was playing starters minutes by the time the postseason rolled around. Beyond that, Jack will likely bring some much needed veteran experience, toughness, and intensity to the Cavaliers' locker room. The Cavs struggled to find a consistent leader over the past several seasons. Jarrett Jack certainly has the potential to be a driving force in Cleveland's attempts to establish a professional and winning culture.

One of the areas in which Jarrett Jack excels is the pick and pop with big men. The Warriors made excellent use of this last season with Carl Landry and David Lee. With the return of Anderson Varejao and the selection of Anthony Bennett, it's safe to assume that this will be a significant fixture in the Cavaliers' attack next season. He scored .88 PPP (27th in the NBA) as the pick and roll ball handler (per Synergy Sports), but that figure does not include how efficient the Warriors were when Jack opted to make plays for his teammates instead of shooting. For comparisons sake, Jack allowed just .70 PPP (45th in the NBA) as the primary defender of the pick and roll ball handler. For as tremendous as Kyrie Irving is, his ability to run the pick and roll is still a work in progress. Irving scored just .81 PPP as the pick and roll ball handler (68th in the NBA). Jack should improve the pick and roll on both offense and defense. More generally, having another guard that can initiate offense is a nice luxury to have. It wasn't entirely necessary due to the point guard skills that Dion Waiters possesses, but it's a nice bonus. In Mike Brown's previous stint with the Cavs, the offense was frequently stagnant as LeBron James was the only viable creator on offense. That shouldn't be a problem this time around as the Cavs seem to be giving Coach Brown so many weapons that it would be impossible for him to have a stagnant offense.

Jack will likely anchor a bench that really struggled last season. Although we saw substantial improvement after the trade with the Memphis Grizzlies, neither Wayne Ellington nor Marreese Speights is still with the Cavs. The ability to prevent the team from turning into a flaming train wreck when Kyrie gets a rest is something that the Cavs undoubtedly loved about Jack. He'll take some pressure off of Kyrie and hopefully help the superstar point guard stay healthy. This might include playing Kyrie off the ball as the de facto shooting guard sometimes. As we know, Irving is a tremendous shooter and, while it will take some time for him to truly master playing without the ball in his hands, Kyrie can be a weapon in that situation without having to put so much wear on his body.

Perhaps the most valuable thing that Jack brings to the Cavaliers is his shooting ability. This past season, Jack shot 40.4% on three-pointers while taking more than 2.5 per game. While we're hoping that Dion Waiters' percentage from behind the arc improves this year, the Cavs needed Jack's shooting ability to open up the court some more. Wayne Ellington, one of the Cavs' best shooters, doesn't look like he'll be back next season. Having a third guard that can really shoot the ball opens up so many more opportunities. If the Cavaliers had simply kept Shaun Livingston as their backup point guard, it would mean that he could rarely play with Kyrie Irving. Jack is perfectly capable of playing shooting guard, playing off the ball, and knocking down shots as a spot-up shooter. Last season, he scored 1.12 PPP on spot-ups, including a blistering 46% on spot-up threes.

Here's Jack's shooting chart from Kirk Goldsberry. As you can see, he isn't a great finisher at the rim, but he more than makes up for it with his shooting ability. 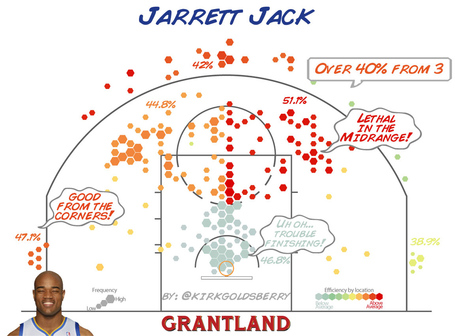 How did Jarrett Jack get to the Cavs?

David Aldridge wrote a really interesting article about how the Cavaliers ended up landing Jack, so you should read it here. But I'll give you the highlights. Basically, once the Warriors decided to work a sign and trade for Andre Iguodala, it was clear that Jack wasn't returning to Golden State. It's an understandable move from the Warriors' perspective, but probably pretty annoying if you're Jack coming off one of the best seasons of your career. After that move, Jack had to look elsewhere and the Cavaliers were immediately interested. According to Aldridge, it was Mike Brown that led the charge to sign Jack. That simply confirms what I said about Jack being a guy that the Cavs want to set the culture. They knew that they needed a veteran presence, but the key is to find a veteran that can actually play. Jack fits the bill.

"Basically, the person that spearheaded the deal was Mike Brown," Jack said. "Chris Grant asked who he wanted, and the only person he brought up was me. To start off with a vote of confidence with the coach is big. I know what they have there with Kyrie Irving and Dion Waiters. It seems like an organization that's first class, from everybody I've spoken with. It's time for a new challenge for me."

Bottom-line: Is this a good move by the Cavs?

After reading everything that I've said, you can probably guess my answer to this question. It seems like a good move, at a good-but-not-great price, to fill some significant needs. The Cavs needed to add a shooter, a backup point guard, and a veteran leader. With the signing of Jarrett Jack, they may have filled all three of those holes at once. The Cavs have more options with a legitimate three-guard rotation and can even experiment with playing Irving, Jack, and Waiters together.

The deal may be a little longer than some would like, but the team option alleviates most of those concerns. The money is a little high, but when you consider that he probably raised his stock with his playoff performance and that it probably costs a bit more to get free agents to Cleveland, the $25 million price tag is pretty reasonable. This is a move that I think Cavs fans will really appreciate after practically begging for Chris Grant to do something in free agency. Well he did something. And while it's not a perfect signing and it's not a superstar addition, it's a pretty solid move nonetheless.