You know I know it's the offseason? Because I'm about to write this article.

The Cleveland Cavaliers guard, Dion Waiters, is a nice guy who hosted a pretty successful charity bowling event in Cleveland a couple of weeks ago. That was a pretty tame evening and some members of the Fear the Sword crew even ended up attending. An article from PhillyBurbs.com reports that Waiters also hosted a not-so-tame event on August 11th. 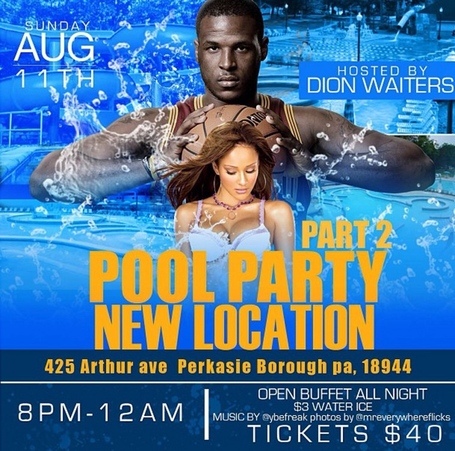 According to the article, residents of the suburb, Perkasie, are upset about a pool party that ended up getting out of control.

"A throng of angry residents packed Perkasie's borough hall Monday night, the crowd spilling into the hall beyond. Most of the nearly 100 present were there with concerns about an unruly, overcrowded party of more than 700 "out-of-towners" at the Menlo pool Aug. 11 that involved alcohol and suspected illegal drug use."

You hear that? A throng of angry residents went to the town hall to complain about the party. Why? Because it was loud and involved alcohol and "suspected illegal drug use."

The private party was held at a pool that Waiters and his crew apparently rented out for the night. It sounds as though the party was originally going to have about 100 people, but it ended up with over 700. I'm totally shocked that a party thrown by an NBA player ended up getting crashed. Stunned.

The most interesting part of this story is how sincerely concerned and angry the "throng of residents" was at the meeting.

"Another man worried about the message being sent after "a bunch" of people "descended on our town and trashed the place," but none were arrested. He aired concerns that the partygoers might return to "steal or whatever" from residents."

This guy wanted people arrested and was afraid that people were going to come back and steal his stuff.

Another lady was seemingly afraid for her life. Because you never know when a party is going to turn into an angry mob and just start torching nearby houses.

"Kate Lane, a neighbor of the pool, said the night was very scary. "I was scared, and I thank God for the police that were in front of my house," she said."

It's not clear whether or not Dion Waiters was actually at the party. Nobody was arrested and apparently the town officials are working on changing the policies of the pool place so that the residents don't have to deal with the constant stream of NBA players throwing parties in Perkasie, Pennsylvania in the future.

If there are really any damages or fines that Waiters has to pay for hosting the party, he should send a check with this GIF attached.

More from Fear The Sword: