The time I beat Dion Waiters at bowling.

Dion Waiters is just as competitive off the court as he is on it.

Share All sharing options for: The time I beat Dion Waiters at bowling.

I wasn’t even supposed to bowl in the Waiters Weekend Basketbowl Fundraiser Cleveland Bowling Extravaganza. 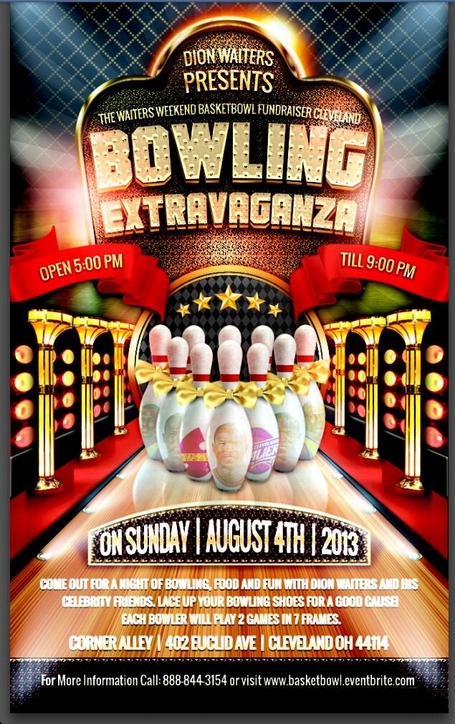 The original plan was to have the CavsZine bowling team represented by our editor and fearless leader @WayneEmbrysKids, Esquire’s Scott Raab, @The_Danny_Fairy (captain of his high school bowling team) and our ringer, Jeff Monroe, who boasts a perfect 300 on his resume. Heading in, we felt good about our chances. We didn’t know the level of competition or if this was even an actual tournament, but we weren’t taking any chances. CavsZine built the strongest team we could.

I wasn’t attending to bowl. I was attending the charity event to drink with the CavsZine crew, crack Andrew Bynum jokes, and hang out with local Cleveland celebrities like Anthony Lima, Chad Zumock and Cleveland sports blogosphere’s only hottest couple, Showers. Not to mention NBA players like Dion Waiters and CJ Miles.

But a few days before the event, Scott Raab hurt his back. He was a no-go and the CavsZine crew needed a replacement. Jack went to twitter for help.

Need a sleeper bowler to join the #CavsZine4 team Sunday. Must be able to bowl Sunday at 5 AND average over 250.

We left no stone unturned.

Finally, I offered up my services. I’m not a very good bowler and it has been a few years since I've laced 'em up. My career high is something around 170. Sure, I’ve played in some bowling leagues, but always as the fourth guy. And while a bowling league isn’t a bad way to spend a Tuesday night, I tended to get sick of the well-meaning folks who kept trying to get me to drunkenly change my poor bowling form.

See, there are two types of bowlers: the ones with proper form and technique and then the rest of us. That first type owns a special bowling glove and uses words like "pocket" and "action" without giggling. They have actual skill. The rest of us, we’re just trying to throw that ball straight. That’s it. At least, what I'm trying to do. Throw that bastard straight. While I’m not necessarily trying to hit the one pin head on (I mean, who wants a split, amirite?), that’s my basic strategy.

Jack, having already seen my natural athleticism on display both on hardwood and the discgolf course, readily accepted. I was on the team.

The atmosphere at the Corner Alley was relaxed and friendly. Teams of all shapes and sizes filled the lanes. This wasn’t so much a competition as it was a bunch of Cavs fans hanging out while bowling (and munching on the tasty buffet). Everyone went at their own pace and it was really a nice family event.

Dion showed up about halfway through the first game and ended up getting added to our CavsZine lane. So that was neat. We did what anyone else would do: started showing him the awesomeness that is CavsZine. 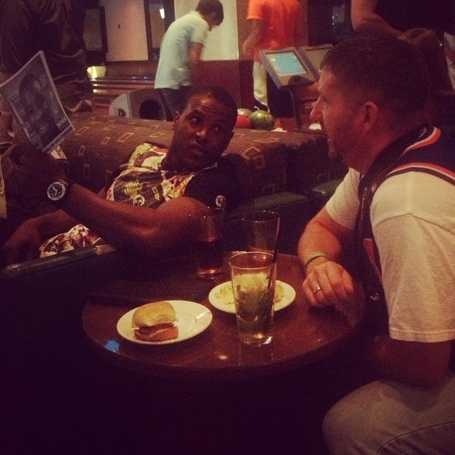 Dion used the rest of that first game to get himself warmed up and shake off some rust. After assessing the skill level of his CavsZine competition, he offered us a friendly wager of five push-ups on the outcome of the next game.

What choice did we have? Of course we accepted the challenge.

Dion came out strong in the second game, netting strikes in two of his first three frames. But somehow I started off even hotter, going strike-spare-strike-strike to begin the final game. Things were just getting interesting when we had to pause our competition so Dion could go sign autographs at his pre-set time. 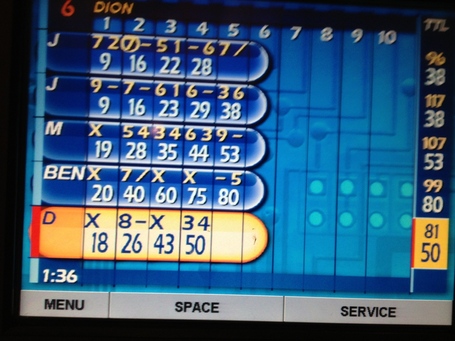 Look at that score at the break. Dion Waiters probably thinks I’m an amazing bowler.

I’m not gonna lie, the break really worked out for me. Not only did Dion lose his rhythm, but this gave me time rest my rarely used bowling arm (not to mention to sober up a bit). But we kept ourselves busy. While Dion was signing jerseys and pictures, the CavsZine crew filmed some interviews and pushups for Access Cavaliers (just in case we lost).

For what it’s worth, this was about the time that CJ Miles showed up. I don’t remember seeing CJ bowling, but he happily signed autographs and took pictures with fans.

Once Dion had finished signing autographs, the game resumed. In a surprise to no one, Waiters came back strong down the stretch. I had left some pins standing and Dion smelled blood. He got a strike in the eight and a spare in the ninth to close the gap. But while I had righted the ship with a spare the ninth, I failed to mark in the tenth. Waiters went into final frame needing ten pins for the victory.

Dion’s first ball looked good, but only knocked down nine. He left the seven pin. It wasn’t a gimme pickup, but it was certainly doable. Dion released his second ball and… nothing. Ballgame. 123-122. 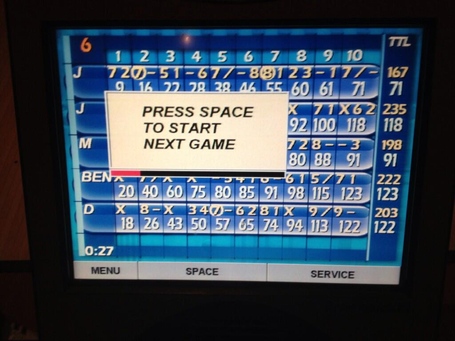 After bowling with Dion for a few hours, I have a few takeaways. You can judge for yourself if you should factor these observations in to any assessment of the upcoming season:

In the end, I thought Dion's charity bowling event went off really well. Everyone seemed to enjoy themselves, the food was excellent and Dion and CJ Miles made themselves really accessible to all the fans. I can only hope that a close loss to the CavsZine crew won't prevent him from hosting any more local events.