The Cavaliers attempted to implement an ICE pick-and-roll defense midway through the season to bad results. Here is an explanation of how ICE-ing the pick-and-roll works, and then how the Cavaliers failed at it.

The Cavaliers defense last season was horrible. But why was it so bad? Why did they fail so miserably at defending? What caused such bad rotations? Let's take a look at one way the defense struggled last season.

Statistically, the Cavaliers finished 19th in the NBA against pick-and-roll ball-handlers last season, according to Synergy. While this is better than their defensive finish overall -- which was 26th -- a lot of their problems stemmed from what seems to be a lack of conviction or execution in pick-and-roll sets. One place they struggled was on side pick-and-rolls.

Before we get to how they struggled there, let's take a look at what is probably the most effective and widely-used strategy to defend side pick-and-rolls. It is referred to as "ICE-ing" or "BLUE-ing" (I'll refer to it henceforth as "ICE"). Here, we'll see how it works in picture format from a good defensive team before we move onto the Cavaliers. 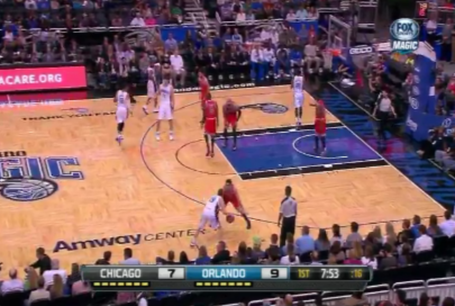 Here, we see Beno Udrih of the Magic handling the ball against Kirk Hinrich of the Bulls. The Bulls are one of the best teams in the NBA at utilizing the ICE defensive set and forcing the shot that they want. It's worth mentioning that the Bulls will attempt to force teams into this position often by using a full-court pressure in order to bring them to the side instead of the middle of the floor. Because your help defense is normally on the baseline/sideline and the middle of the floor is so dangerous from an offensive point of view in the NBA, the goal is to keep teams out of the middle and towards the sideline. 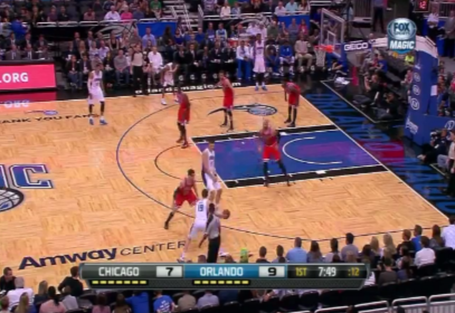 Nikola Vucevic has come up to set a screen for Udrih. Notice how Hinrich has adjusted his positioning. Instead of hedging with the big man in order to make sure that the ball-handler can't get to the middle of the floor, Hinrich adjusts his positioning so that he is between the screener and the ball-handler. Now on with the defender on his hip, Udrih has to go right and towards the baseline in order to get penetration. Also, notice how the big defender, Carlos Boozer in this scenario, lays back and stays underneath the screen. Basically, it is the opposite of hedging with your big man. Instead of coming up to defend the big, Boozer will simply lay back and defend the roll with his length, along with giving Udrih space in the midrange going towards the baseline. 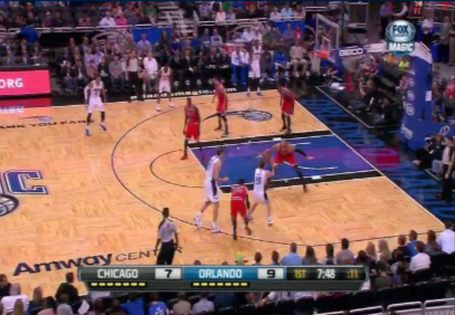 Now that Udrih has gone past Hinrich, we see what his options are. I see three of them. First, he can continue to penetrate to his right, and get stuck in the corner where Boozer and Hinrich can potentially trap him (not a good plan given where the rest of the Bulls D and his players are). Second, he can bring it back out, and potentially try to isolate Boozer (most likely, that ends up leading to a midrange jumper, so the Bulls are fine with that) or reset the offense with fewer seconds on the shot clock. His third option, and the one he chooses, is to take an inefficient 16-20 foot jumper, which is exactly what the Bulls want here. They're willing to live with a shot like that. Udrih misses the shot, and Jimmy Butler is right underneath the hoop for a rebound.

Here is a full video of the way that play occurs:

So now that you hopefully understand the way that ICE-ing the ball-handler works in the pick-and-roll, let's move onto why the Cavaliers failed so miserably at defending the pick-and-roll. From watching tape, it looks like a combination of both execution and game planning missteps. These two things go hand-in-hand, so we'll look at a few examples of where the Cavaliers went wrong.

As I mentioned earlier, ICE-ing the pick-and-roll is normally saved for side pick-and-roll situations. What happens when you try to ICE in the middle of the floor, and one guy thinks they should be ICE-ing and the other tries to play it straight up? Well, let's just watch. 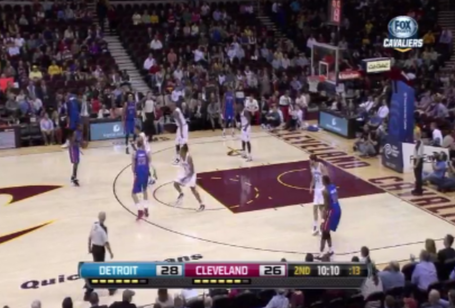 So here, we see Jonas Jerebko coming up to set a screen for Will Bynum in the middle of the floor. Shaun Livingston is guarding Bynum, and Kevin Jones is on Jerebko. 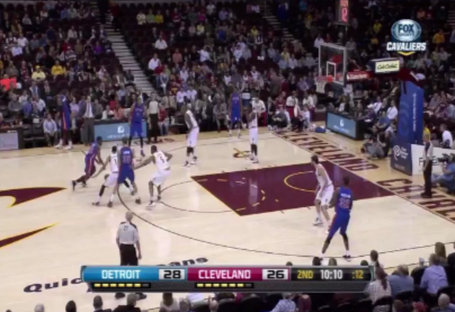 Livingston attempts to get on his hip as if this is an ICE situation. First off, this is a mistake because of how high Jones is guarding Jerebko. Livingston is basically giving up the entire lane to Bynum by getting on his hip in this situation. Second, even if Jones is in position here for an attempted ICE pick-and-roll defense, you can see why this is problematic, right? Livingston is giving up the middle no matter what Bynum does here. The defense will then have to immediately collapse down or else Bynum can simply break them down. If the defense collapses, that allows Bynum to pick them apart with a pass. So no matter what here, Livingston has made the wrong choice by jumping up in between the ball-handler and screener. Here's how the play, unsurprisingly, ends. 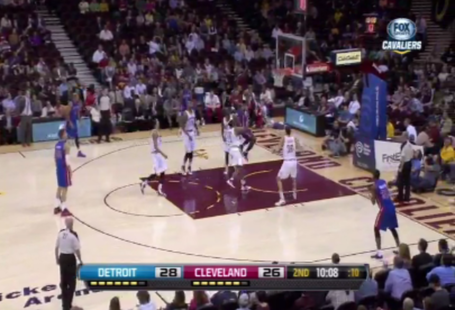 I know it's kind of difficult to see, but yeah thats Bynum at the rim with no one in front of him about to lay it in. Here is the full play: 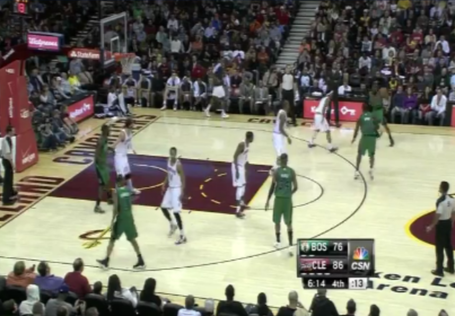 Here, we see Jordan Crawford with the ball being defended by Daniel Gibson. The screener is coming over, and Marreese Speights' responsibility is to stay below the screen and force Crawford towards the baseline. Let's see what happens. 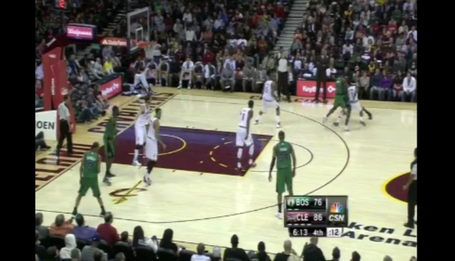 Gibson got on Crawford's hip, and forced him towards the baseline. Good job, Boobie (I had to fast forward it slightly so that you could see Gibson. He looks way out of position in this shot, but he actually defended it properly as you'll see in the full video). So now, as Crawford drives down, it's Speights' responsibility to keep him from the middle. Already, we can see where this is going to be an issue. Speights is way too close to the action and too far to the left. From this positioning, it's going to be extremely hard to force Crawford towards the baseline, and he's too close for Crawford to take a bad jumper here. 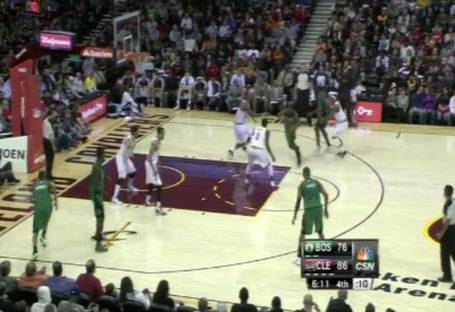 Because Speights was so close and to the left, Crawford is able to cross over and get into the middle of the lane. Once here, look at all of his options. First off, HOLY CRAP PAUL PIERCE IS WIDE OPEN. Second, he could continue his drive into the open seas. Even though we see four Cavaliers in striking distance, it's fairly easy even for a player of Crawford's skill to split Speights and C.J. Miles at the elbow and get to the lane before either of the guys on the right side of the paint can contest his layup. Even if they are able to get over, Crawford's third option is simply to dump it to either of the guys standing in the corner. Here's the full play.

Here's the next play where the guard fails to contain. Again, this is something that happened way too often. 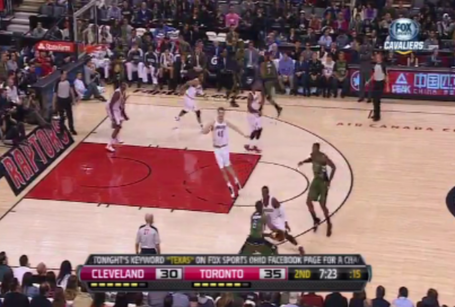 Here, we see Alan Anderson with the ball, guarded by Dion Waiters. Waiters here does the right thing, immediately jumping up to Anderson's hip. We have the big rotating over to set the screen for Anderson, and Zeller is getting in position. The fact that Zeller isn't there quite yet is okay, given where his man is on the floor and where Anderson's body is pointing. The issue here is Waiters. His defensive stance is problematic for a lot of reasons, but the most important one being that his arms are at his sides. Because of that, Anderson sees the space to go around Waiters and play straight into his big man's screen. 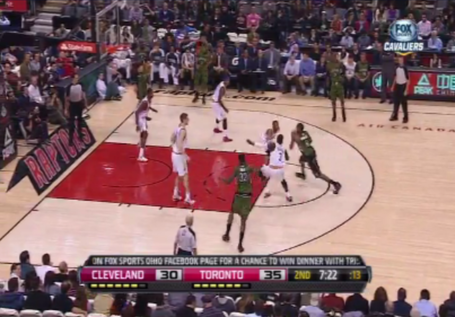 Anderson has gotten around Waiters and into the middle of the lane. Again, we can see why this is problematic. The defense has had to collapse in on Anderson, meaning he has a kick out for a wide open three or a run right at the rim. Even though there are four guys in the paint here for the Cavs, it's going to be extremely difficult to stop a guard with a full head of steam (again, this is why keeping players out of the middle is so important). 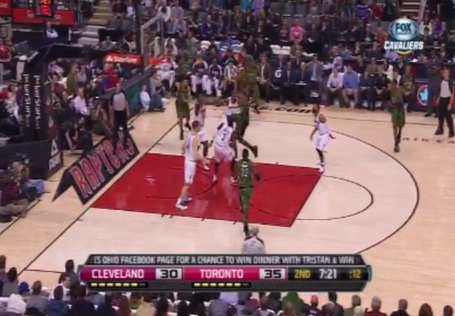 Before the help at the rim can even respond, Anderson is going up for a floater/layup in the middle of the lane. This is a high percentage look that occurred from being unable to keep the ball-handler out of the middle.

While these plays are single occurrences, they are indicative of what the Cavaliers struggled with from January on through the season (they never ICE-ed the side pick-and-roll early in the season, and simply played everything straight up). These types of things happened far too often for a defense to be successful. This wasn't the only place they struggled defensively, but it was one of the problems that plagued them. This not only hurt them on guys getting buckets at the hole, but their inability to defend the pick-and-roll ball-handler plagued them in spot-up situations, because the defense was constantly collapsing into the middle (the Cavs gave up over 1 PPP on spot-ups last year).

It's worth mentioning that Mike Brown seemingly did not run a whole lot of ICE when with the Lakers (Coach Nick of BBallBreakdown.com gives an explanation of that here in his writeup of a Clips-Lakers game from early 2012). However, it has seemingly become more popular in the past year and half since Brown has coached. It'll be interesting to see if he utilizes it with the Cavs. Either way, he should at least be able to fix some of the fundamental issues that have plagued the Cavaliers' perimeter defenders in the past two seasons. (Note: Conrad will be doing a post similar to this breaking down how exactly Mike Brown's Lakers defenses decided to defend the side pick and roll to get an idea of what the Cavs will do next season.)

With hope, we see a total team improvement so I don't have to actually write another one of these posts again next season.