Dion Waiters has busy offseason, thinks he can be top NBA shooting guard

Dion Waiters has had a busy offeason. Will it lead to a big second year for Cleveland's starting shooting guard?

Share All sharing options for: Dion Waiters has busy offseason, thinks he can be top NBA shooting guard

Dion Waiters was a surprise top 5 selection in the 2012 NBA Draft. After an uneven rookie season that gave detractors plenty of ammunition to take shots at Waiters and the Cavaliers organization for making the pick, while also giving his advocates plenty of evidence of NBA explosiveness and athleticism to go along with a stretch of 30 some games where he played some pretty good ball, what are we left with? No one has a definitive answer to that question yet, and one may not be coming anytime soon. In the meantime, Waiters seems hellbent on proving himself worthy of his draft position; if the NBA offseason is supposed to be about rest and relaxation (it's not), no one told Dion Waiters.

Living in the gym, working out with Kyrie Irving

If you follow Waiters on Twitter or Instagram (and you should, it's pretty entertaining) you know he works out quite a bit. He wants you to know. Whether its finding pickup games when he goes home to Philly, using the gym at Temple University, or going hard in Las Vegas with individual player development coaches, Waiters lives and breathes basketball. He is in tremendous shape.  In May, while NBA playoffs were still going on, Waiters was already working on his jump shot, where he has a goal of shooting a ridiculous 45% from three point range. After shooting 31% as a rookie, a jump to 35% would be just fine. More recently he was in Los Angeles with teammate Kyrie Irving working on improving their chemistry and getting ready for training camp. Irving Instagrammed this picture, and you have to feel good about how well-conditioned Waiters and Irving look. 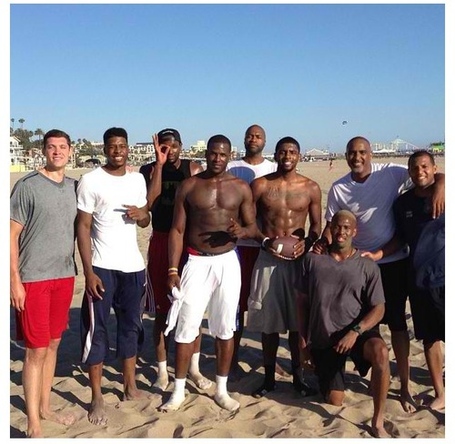 I have noted before how different Irving and Waiters are, both in style of play on the court and off it. Irving is finesse and beauty, Waiters is power and force. Irving is measured and patient, Waiters presses the issue. But given their differences, they are good friends and know their chemistry has to get better. As Waiters told Jason Lloyd of the Akron Beacon Journal, "It was, ‘Your turn, my turn, your turn, my turn’ and we can’t play like that. Great players today, Dwayne [Wade] is playing off LeBron [James] and Russell Westbrook is playing off K.D. [Kevin Durant]. Every team has two players now, if you really watch it. If you’re good, you can make it work. That’s the bottom line."

I wrote about the Memphis Grizzlies run during the playoffs this spring that a major lesson the Cavaliers could learn from their success was simply to stay the course and let guys grow up together. Mike Conley, Tony Allen, Zach Randolph, and Marc Gasol have played thousands of minutes together. They aren't all offensively gifted players, but they know and trust each other. Irving and Waiters need to be on the court together, growing pains and all.

It wasn't just private workouts Waiters took part in this summer. Even though the Cavaliers didn't order him to play, Waiters took the opportunity to compete in Las Vegas with Tyler Zeller and Carrick Felix to represent the team in Summer League competition. Being the first organized competition Waiters took part in after several months and playing without a point guard or much NBA talent outside of Zeller, you don't want to put much stock into a small sample size of weird Las Vegas competition. Most of the guys playing are just looking to play their way onto a roster, not necessarily play team basketball.

It was a mixed bag for Waiters; there were bad jump shots, there was sulking after driving to the rim and not getting a foul called, there were elite spin moves and crazy finishes, and no sign of a left handed layup. So a bit of what we are used to. But he did break out in the fourth game, scoring 27 efficient points, staying in control and within himself and even playing some defense.

Summer League's end may have brought about a vacation for Waiters, but he ended up having the honor of being invited to work out with Team USA shortly thereafter. By all accounts, Waiters was very good in practice and even earned a starting role in the culminating televised scrimmage that Irving ended up dominating. Waiters wasn't particularly good in the game, but he didn't try and force too much. And though it was a relatively high quality game, it was still more of an All-Star game than serious competion. You could play devil's advocate and argue that Waiters got the starting role because Jim Boeheim and other Syracuse coaches are involved with Team USA, but they aren't going to risk their reputation over the starting lineup of a scrimmage. If they put him out there it's because they felt he had earned it. Still, the camp was another opportunity to see just how polarizing Waiters can be:

USA Basketball brain trust likely having the same thought about Dion Waiters that I am at this point: Why is he here?

Yup RT @JordanBrenner If Team USA is looking for someone willing to take off-balance contested long 2's, Dion Waiters is totally on the team

But the Syracuse coaches had his back:

Another great experience with USA Basketball. Amazing people/ learned so much. So proud of @dionwaiters3. He was really good!

And Boeheim said afterwards, "He's opened up a lot of eyes. And that's not just me saying it. He's just done a really good job here."

It is encouraging that Waiters was able to hold his own with some really good basketball players. You would like to have seen more consistency in Las Vegas, both with Summer League and in the Team USA scrimmage, but they are imperfect tests of where a player is at. Waiters got better as Summer League went on, and his workouts with the national team were a success. Not sure asking for more makes sense.

Mike Brown, and what comes next

Waiters and the rest of the Cavaliers will have a new head coach this season, and with it will come a completely new role. Mike Brown wants Waiters to focus on becoming a defensive stopper, getting into transition, and not being a primary ball-handler. Waiters has clashed with coaches before, but seems to be attentive to Brown at this point.

And while observers around the league question Waiters after his first season, the man himself has little doubt about what kind of player he can be in the NBA. In an interview with Alex Kennedy of Hoopsworld:

"I’m coming. I just feel as though I’m next up as far as shooting guards. If you look around, you know, Kobe [Bryant] and [Dwyane] Wade and those guys, they paved the way for a player like me and they’re almost done. It’s not like that, but I’m just saying, I’m coming. I just want everybody to know that.

"Without a doubt, I really believe that [I’ll eventually be the best shooting guard in the NBA]. This year, I’m going to show a lot of people who doubted me and still doubt me. I’m going to show them. And I don’t need praise and all of that. I just want to be respected. I’m coming. That’s all I have to say. I’ve taken my work ethic to another level and I feel as though I still have something to prove. So, watch out."

That quote, to outside observers, looks ridiculous. To Cavs fans, right now, it looks great. There might be a time when Waiters needs to adopt more of a complimentary role to Irving; the chances of him getting to Irving's level or even close would seem to be quite low. But for now, this is an explosive top 5 draft pick who has played only one NBA season. Why would we want him to put a ceiling on himself? If striving to be the best is what motivates him, puts the chip on his shoulder, then sure. Would I rather he probably just stay quiet and let his game do his talking for him? Yes. But Dion Waiters is a different cat. And for the most part, it's pretty fun.

And while that quote got all the attention, Waiters said some really good things to Hoopsworld as well. He said he was focused on taking good shots within the offense. He said he was working hard to remain balanced and upright when he takes jump shots. When Waiters was set last season, he was a pretty productive shooter. When he wasn't set, he wasn't good. And even as he proclaims that he wants to be the best shooting guard in the NBA, the team goals aren't far from his mind, telling Kennedy that "We have a big year coming up and I need to be ready for my team and the organization."

If Dion Waiters steps up his defensive game, doesn't take threes off the bounce, attacks the rim without sulking afterwards, keeps developing his mid-range game, and remembers how good of a passer he can be a bit more often, he can put himself into the conversation of top shooting guards. What's more, he has the physical ability to do all those things. He happens to work really hard. Patience tends to be important when it comes to Waiters; the relationship with Mike Brown will be fascinating. I can't wait.