The Cleveland Cavaliers kick off their 2013-14 season with Media Day! Get excited!

The 2013-14 NBA season is here! Well, kind of. Today is Cleveland Cavaliers Media Day! That means we get to see some of the Cavs' players really talk to the media for the first time since joining the team or returning from injury or returning from whatever random country they went to during the offseason. We'll also get to hear Mike Brown talk and that's always fun. We'll keep you updated on this stream throughout the day, so check back here every five minutes to see if there's a new update.

Because a new NBA season is upon us, we are bound to hear a million cliches out of each team. Luckily to help us fans get through this awkward foreplay to the 2013-2014 season, The Score has come up with a handy tool.

It's training camp BINGO y'all! 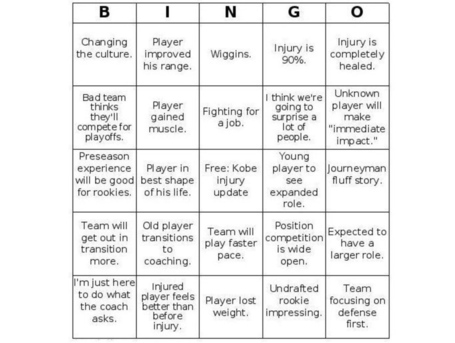 It seems every year there are these same quotes from almost every team. Who could forget this classic:

Here are some quotes from before the 2010-11 season. Keep in mind that this team lost 63 games, including 26 in a row at one point.

This one is from Leon Powe...

"I think we are a playoff team this season, I really do."

Or from Joey Graham...

"We could be a scary team this year, it's fun to be doubted."

The optimistic fan buys into these quotes every year. I've probably convinced myself over a hundred times that some D League scrub is going to have an impact on the team or that Manny Harris will be able to be a good scorer at the NBA level. If you want a stroll down memory lane read everything in this article. (Thank you, Justin Rowan for finding these amazingly awesome quotes. We are forever in your debt.)

So get ready for thousands of quotes about how Kyrie Irving is in the best shape of his life (I really think he is, though!) and how the team will play a defensive brand of basketball and how Andrew Bynum is getting close to practicing with the team (no really, we swear!) and how the team will work together and trust each other and be a family and blah blah blah. This is a team that most people expect to make a run for the playoffs so you can buy in to what you hear today or you can be pessimistic (coughDavidcough) and try to evaluate how out of shape somebody is by a picture of them wearing clothes. I assure you that it is more fun when you buy in though.