Cleveland Cavaliers getting on track since trading for Luol Deng

The Cavs have been significantly better since trading for Luol Deng. Can they keep it up?

Share All sharing options for: Cleveland Cavaliers getting on track since trading for Luol Deng

The Cleveland Cavaliers just finished up a 5-game West Coast road trip. Going into this trip, the Cavs had won 2 road games all season. On this most recent trip, they went 3-2. Since announcing the trade of Luol Deng, the Cavs are 4-2 (although Deng didn't play in that first game against the Philadelphia 76ers).

In the 5 games that Deng has played, he's averaging 18.4 points per game and shooting 50% from behind the arc. Obviously that second number is going to regress, but the impact that he's having on the Cavs is apparent. He's a veteran presence, a guy with actual leadership ability, and somebody that buys in 100% on the defensive end of the floor. There's no doubt that he's help the young players in Cleveland's locker room.

I always expect players to downplay one player's addition or to not answer the obvious. Three Cavs I talked to on improvements: "Having Lu."

Now the question is...will the Cavs be able to build off their recent improvements and make an actual push for the playoffs? As of Saturday evening, the Cavs are just a game and a half out of a playoff spot in the Eastern Conference at 15-25. They've played 22 games on the road, compared to just 18 games at home. That means they have a fair amount of home games coming up. In fact, they'll get those home games back this coming week. Following that 5-game road trip, the Cavs will start a 5-game home stand on Monday when they host the Dallas Mavericks on MLK Jr. Day at 3 PM.

All 5 games on the coming home stand are fairly winnable. Cleveland's opponents are: Mavericks, Bulls (Deng's first game against his old team!), Bucks, Suns, and Pelicans. None of those games are back to backs, either. If there was ever a time for the Cavs to grab hold of a playoff spot, this is the stretch in the schedule that allows for that.

After the 5-game home stand, the Cavs' schedule remains pretty soft throughout February. They'll have a 3-game road trip against the Knicks, Rockets, and Mavs which will be pretty tough, but not impossible. They could easily go 1-2 on that trip and that'd be okay because the schedule looks pretty nice after that. Check it out: 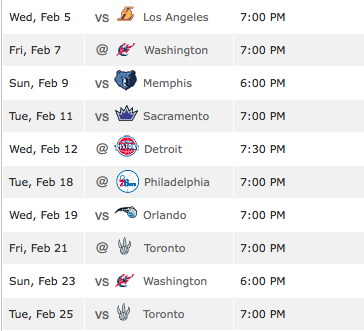 Do any of those look super tough? There's just one set of back-to-backs in there and those come against the Sixers and Magic.

So what does this mean? It means that if the Cavs with Luol Deng are for real, they need to show it over the next 18 games. Only 7 of their next 18 opponents have more wins than losses. I think we'll learn a lot about this team over the next 18 games. If they're actually pretty good, then they'll take care of business against some of these lesser opponents, especially at home.

If I had to guess, I'd say that the Cavs will go 10-8 over that stretch. Maybe that's optimistic, but I've really liked what I've seen out of the Cavs since they added Deng. The next step is putting it together for an extended period of time and racking up some wins.