The Cavs absolutely collapsed against the Phoenix Suns.

The Cleveland Cavaliers led the Phoenix Suns at halftime, 61-43. By the end of the third quarter, they trailed 68-67. If you're good at math, you'll be able to figure out that that means the Suns outscored the Cavs 25-6 in the third quarter. Twenty five to six. The Cavs completely collapsed in the second half, got booed off their home floor, and the Suns left with a 99-90 win. 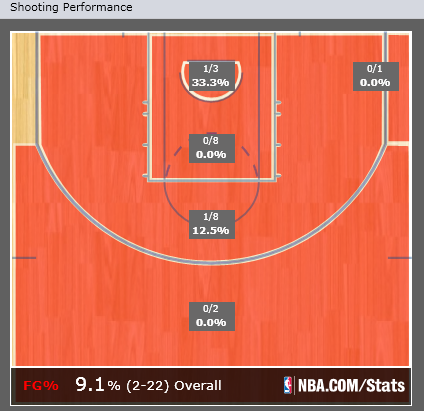 So after leading the Suns by 18 points, they suddenly found themselves down by 11 in the fourth quarter. How the shit did that happen? What were the Cavs doing during halftime? I have some theories, but I think we should just revisit this post that Angelo wrote last season: WHAT DO THE CAVS DO DURING HALFTIME?

After the first 24 minutes, I was feeling as good about this team as I have all season. And then they came out of the locker room and played like a bunch of drunk babies. Were they all just really proud that they looked like an actual basketball team for one half that they felt confident enough that they could just screw around for the rest of the game? Did somebody cut off their hands and replace them with hooves?

About halfway through the fourth quarter, the Cavs started playing better. But it was too late. The damage had been done and the great, energetic, locked-in first half had gone completely to waste. The Phoenix Suns are a solid, but not great team without Eric Bledsoe. But they do have a ton of three-point shooters, play with fantastic energy, and never give up on a game. They could have give up after the first half because they were being completely outplayed by Cleveland. But they didn't. The Cavs played sloppy defense, couldn't hit a shot, and then spent the fourth quarter trying to make a desperate comeback on their home floor. Spoiler alert: they couldn't make the comeback.

Markieff Morris absolutely abused the Cavs all night long. He finished with 27 points and 15 rebounds. Channing Frye was wide open for countless three-pointers. This was a completely deflating loss for a Cavs team that has had a season's worth of deflating losses already.