The Cavs have been linked to Richard Jefferson, who has kind of been off the radar lately. I reached out the head man at SLC Dunk to get some info on who RJ is today.

Share All sharing options for: NBA Trade Rumors: What would Richard Jefferson bring to Cavaliers in Andrew Bynum trade?

As trade talks plod on with the Los Angeles Lakers regarding Pau Gasol, and LA's demands get more ridiculous by the minute, the Cavs potential trade with the Utah Jazz for Richard Jefferson lurks in the backround as an option. We haven't seen RJ in a while, having been riding pine by the time San Antonio or Golden State made it to the playoffs the last two years.

So what kind of player is he these days? AllThatAmar, editor of SLC Dunk was kind enough to let me do a little Q&A with him on the subject:

I don't think that the Pau Gasol thing is happening, so the Richard Jefferson deal lurking in the backround may be more likely at this point. Just looking for some insight as to who this older version of Jefferson is.

-When I looked RJ up, I was shocked to see that he is an above 40% three point shooter (and getting 30 minutes a night?!). The Cavs are desperate for floor spacers, is this number deceiving or is he a dependable deep threat?

SLC Dunk:
Richard Jefferson is doing "it" this season from downtown. Of course what "it" is remains to be seen. He is a career 37.4 3pt% shooter, so he's having an 'above' average year by the numbers. He's also taking a lot of shots, and as you pointed out, playing a lot of minutes. So we like to think that this is a large enough sample size to be representative of his actual play. During games he's a guy who will brick all of his shots, and then make three jumpers in the 4th quarter and be dubbed a 'hero' for his consistent effort. And the effort is there, even if I feel like he's unreliable from deep -- which is something you don't usually say about someone who is shooting 42% from the outside. The numbers suggest he is dependable and can space the floor still -- intuition (and watching every game multiple times) tells me that his primary value on the floor is still slashing and he misses way more open jumpers than he should.

I don't know if that answers your question or not. He's making shots now, but how much of that is just the fact that he's in a contract year trying to prolong his career as he was recently dumped by two Western Conference playoff teams in short succession and sees his time in Utah as a 'now or never' situation?

Fear The Sword:
-Mike Brown is notorious for favoring a defensive focus, how is Jefferson on defense these days? I assume his days as a stopper are long gone, but is he even passable?

SLC Dunk:
-Jefferson's defense hasn't been good at all this year. He has the worst DRtg of his career (at 112), and MySynergySports indicates that by opponents points per possession he ranks #323 out of a grand total of #433 NBA players this year. He is a capable defender off of screens, so he is still good enough to motor around and follow his man. He is slow when contesting spot ups (which account for 40% of the time he's on defense), and average-y at most everything else. He has not been significantly challenged this season on isolations or having to defend the pick and roll ball handler. While it is agreed that he is a shell of his former defensive self, under the watchful eye of Contract Year Head coach Tyrone Corbin -- he's never pulled for defensive miscues. A big part of his big minutes this year seems to be the blind eye our coaching staff has turned whenever he does mess up. Will that continue on an actual team trying to win games this year? I doubt it.

Of course, and this is the important part here -- a huge thing that can't ever be overlooked is the team strategy. Over the last three seasons Utah Jazz fans complained about Al Jefferson's defense and how bad it was at it. He goes over to the Charlotte Bobcats and now is their anchor for a strong defensive club. (LOLWUT.jpg) So maybe it's not really all about Richard Jefferson's downfall, but partly the fact that our team doesn't have any defensive coaching strategy this year? Under Mike Brown I am sure Jefferson could be a very solid part of a sufficiently strong team defensive effort. I'd rank him below average right now, but I do think he could improve with the right team strategy. Who knows, maybe he's still a good defender? I wouldn't know. He's not asked to defend here.

Fear The Sword:
-The Cavs have 9 players under 23, and two players over 30. It's a really young team that needs smart veterans and leaders. Does Jefferson fit this mold? How is his attitude on a struggling team?

SLC Dunk:
-Jefferson is, over everything, a professional. Yes, he's in a contract year. Yes, veterans in recent years have come to play in Utah for one and done reasons, and have used this team as a way to rehab their careers. All that said, R-Jeff is a professional. He says the right things. He's been in the league for a long time, and is trying to stay in it. So his attitude isn't going to rub anyone the wrong way. If your youth is capable of modeling their behavior on a pro, this is the guy to model your behavior off of. He doesn't take plays off on the court, and even if the other four guys on the team sense a blow out happening, he will still be trying out there. He's just not capable of playing very well anymore beyond his three point shooting and occasional drives to the basket. The only concern is that recently he said that he is in the stage of his career where he wants to play for a contender. Is Cleveland one? If he is content there, he will be a great mentor. The downside is that as a highly intrinsically motivated person he may not be able to gel well with extroverts or other players who need to adjust their attitude to what is happening around them. It's a little too robotic. Our collective struggles have done nothing to affect his behavior. (Unlike the usually mild mannered Marvin Williams, who has been seen foaming at the mouth and barking this season as a really poor-man's KG.)

Fear The Sword:
-Is there any reason the Jazz would want more than Salary relief? I mean, this looks like a good tank season for them, isn't Jefferson just hurting their ability to develop the players that matter long term?

SLC Dunk:
The domino effect of Tyrone Corbin playing Jefferson big minutes and starting him has hurt the development of two players: Alec Burks (who would have been starting, but is now off the bench), and Enes Kanter (same deal). Jefferson even playing means that Gordon Hayward (a 3) has to play the 2, and Marvin (a 3), has to play the 4. Not having Jefferson around would be great if possible. Of course, everyone wants to over-value what they are giving up in a trade. It's human nature. I'd like at least a 2nd rounder back in addition to taking on Andrew Bynum. But that's just me. Some other fans would instead want a 1st rounder. But that's absurd. Even asking for a 2nd rounder may seem absurd. But I'm doing it.

It's an addition by subtraction, even if the Jazz don't get any assets back. I'd be more than happy if this happened as soon as possible. Rumblings suggest that Corbin is not doing what the front office asked him to: focus on developing the youth. Instead Corbin has leaned heavily on the vets in order to better stabilize his own individual goals of having an okay-ish coaching record. Corbin may not be in the big picture for the Jazz, and he is putting his needs above that of the team right now by making Jefferson and John Lucas III major rotation players -- while relegating guys like Alec Burks to the bench and rookie Ian Clark to the NBA-DL. This is a moneyball move on our part. That by itself is sufficient enough reason to make this trade. Even if we don't get anything else back.

First, I really want to thank Amar for the great insight. Taking time out on a Sunday to address this stuff me with me in such an in depth and complete form is a really great hookup.

Now, consuming all of that, how does Jefferson fit here? We definitely need a model pro, and Jefferson has been to the finals and on a lot of deep playoff runs, his knowledge and work ethic may be worth something. Also, he is not Alonzo Gee, or Jarrett Jack guarding small forwards. Personally I think the Cavs could do better with Bynum's contract BUT that is if they hold onto through the offseason. If I had to choose between RJ and Pau, I guess it would all depend on the asking price for Pau. The Lakers have asked for first rounders, Dion Waiters, and Anderson Varejao, safe to say the Jazz don't have the same expectations, and Jefferson doesn't have the same expectations of touches.

Finally, a look a Jefferson's shot chart shows that he might be a decent fit: 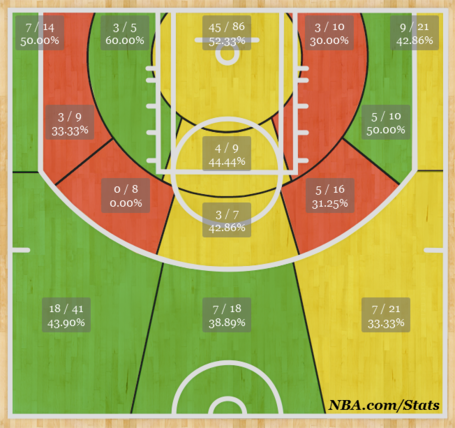 Jefferson's shot chart shows that his three point prowess is highest at the top and around the left side of the arc, which is where the Cavs generate a TON of looks. Although as we heard, he may be prone to hitting these shots in small bunches after cold starts.

So what do you think? Is RJ worth bringing on board, or do we hold the Bynum deal to see what a free $12 million is worth during the draft? We should be finding out soon.