How does Luol Deng fit on the Cleveland Cavaliers' roster?

The Cavaliers acquired Luol Deng in a trade with the Bulls. But how does he fit on his new team?

Share All sharing options for: How does Luol Deng fit on the Cleveland Cavaliers' roster?

As Brian Windhorst of ESPN reported and Dan Gilbert later confirmed, the Cavaliers have acquired Luol Deng from the Chicago Bulls for three draft picks and the contract of Andrew Bynum. The biggest piece going to the Bulls in the trade -- outside of the luxury tax break -- is probably the heavily protected Sacramento first rounder that may or may not ever transfer. It's a valuable piece, but was probably the least valuable of the three extra first rounders the Cavs had procured. Second rounders are second rounders, and the right to swap 2015 first round picks is lottery protected. While the Cavs have potentially given up quite a quantity of talent, it doesn't exactly scream quality. I think it's fair to say that both teams did well getting what they could for their assets. 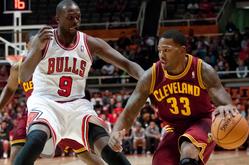 The trade from Cleveland's perspective clearly screams that the Cavaliers are trying to make a run at the playoffs this season despite their 11-23 record. They are three games out right now, and four and a half games out of the fifth seed. If they can mesh quickly, it's not inconceivable that they can make a run to the middle of the Eastern Conference pack. If they reach the fifth or sixth seed, it will probably make this trade worthwhile for the playoff experience of the young players that the Cavs have committed to over the course of the last three drafts. That's getting way ahead of everything though. Let's hit the matter at hand.

How does Deng fit on the Cavaliers? Mainly, the upgrade that he represents on the wing both offensively and defensively is tremendous. The small forward position has been the bane of the Cavaliers' existence since LeBron James left. Earl Clark and Alonzo Gee are combining to average 9.6 points on 38% with 5.8 rebounds and 1 assist per game in 36.6 minutes this season. I'd probably argue that no team was getting worse production out of that position in the entire NBA.

Deng is averaging 19.0 points, 6.9 rebounds, and 3.7 assists on 45% shooting in 37.4 minutes per game this season. Even going by simple counting stats, the advantages of having Deng in the lineup as opposed to this season's small forward dumpster fire are apparent. But let's look further and see what else we can find.

The upgrade here cannot be overstated. Deng is an efficient offensive player and a lights-out defender who can play 35-40 minutes per night. Plus, he's known as a solid, veteran locker room presence that has won before. He instantly becomes the Cavaliers' second best player (sorry, Andy) in a position of need.
Personally, I probably would have preferred to just stick it out and bottom out for this high-end draft class. But that was obviously never an option for Chris Grant, a general manager who is so clearly under the microscope right now. Grant could have easily gone out and completed a panic trade for someone along the lines of Rudy Gay or overpaid for Pau Gasol, who plays a position the Cavaliers don't exactly need. Instead, he made a reasonable trade value-wise for a player in a positional need. While it's not what I would have liked to have seen happen, Grant deserves to be applauded for his actions tonight because he was in an impossible position.
There are downsides with Deng. The most obvious one is that his contract expires after this season ends. He'll be 29 on April 16 (hey, my birthday too! Awesome!), and already has about 23,000 minutes worth of high energy play on his body. That wear and tear is frightening as the Cavaliers spend the rest of the next three months attempting to decide whether or not to offer him a contract extension. The Bulls offered him a 3 year, $30 million contract last week that he declined, which makes sense because he'll certainly be able to get more than that on the open market.
For right now though, what matters is that the Cavaliers have made the shake up trade that they so desperately needed. I doubt that this is the last one for this roster, especially if things don't go well as the next month goes on. But let's exercise patience, and see what this team can string together over the next couple of weeks.