While the entire scrimmage was not this slow, here's some highlights that are.

1 ) Bron is back! It is incredibly surreal to see LeBron James putting on the Wine & Gold to play basketball, even in a scrimmage. I don’t care how much weight he has lost, LeBron James is a still a massive human being who is obviously bigger and stronger than anyone else on the court. 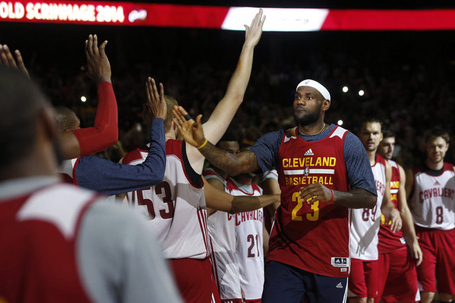 2) Bron is different, and I don’t know how much I like it. LeBron always used to appear to be having fun when he played basketball; he would smile a lot, and visibly be enjoying himself. This iteration of LeBron scowls a lot and barks orders at his teammates. The leadership qualities were refreshing to see, but the "Miami Swagger" he brought with him where he dunks in a scrimmage then mean-mugs the crowd is still a bit over the top. I know this how they did it in Miami, but it’s still strange to see, and I hope this softens a bit. It’s like he walks on the court and puts on a mask. In fact, the only time that mask slipped was when he gave his jersey to a special needs kid after the scrimmage. LeBron cracked a wide smile when the kid gave him a hug.

3) Tristan Thompson really put in work in the off-season. Tristan is much bigger and is a lot stronger than he was last season. He physically dominated Shawn Marion on the block. He was able to back Marion down under the rim on offense and he was able to push him off his spots on defense. He was just too much for him to handle, and Marion is a good post defender. TT physically dominated almost anyone he went against last night. 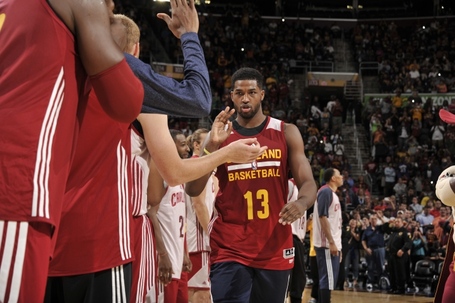 4) TT is taller than Lebron now, He is probably a legit 6"10-6"11. TT’s arms are noticeably bigger and I expect him to be able to hang physically with NBA centers this season. TT looks like he really matured physically and looked great for the entire scrimmage. Honestly, he stood out more than any player aside from the big 3. Also he had really crazy hops in the pre-game dunk line.

5) Kyrie Irving was his usual ridiculous self. Irving showed an array of dribble moves that had the crowd on its feet. Irving also showed off his skills as a passer, executing several no-look "pocket passes" in the paint with Kevin Love. Those two are going to be a lot of fun this year. Kyrie Irving is a Globetrotter playing professional basketball.

6) The Kevin Love outlet passes look twice as ridiculous in person as they do on TV/video. You can’t really get a sense of how fast he gets them out, how accurate they are, or how quickly it turns around a possession.

7) Kevin Love operates in traffic better than any big man I have ever seen. Usually guys his size don’t like and/or struggle when they have two players on them. Kevin love can still get his own shot or execute the correct pass with two players draped all over him. The Cavs are going to be incredibly dangerous with Love operating from the high post and on three point line.

8) The Cavilers are going to run a LOT in 2014/2015. Both teams leaked out players on every shot which leads me to believe we’re going to get out in transition this season. This should really inflate Dion’s numbers as he and LeBron will get a lot of easy points.

9) I love what I saw out of Blatt’s offensive system during the scrimmage. After seeing it in person, I get what Blatt means when he says "The ball has energy." In Blatt’s offense the ball rarely sticks to any one player with the ball moving around looking for an open shot. The Cavs swung the ball around the perimeter more in 1 scrimmage than we saw all of last year with Mike Brown. This lead to lots of open looks from 3, especially via cross-court passes from LeBron James to Kyrie Irving 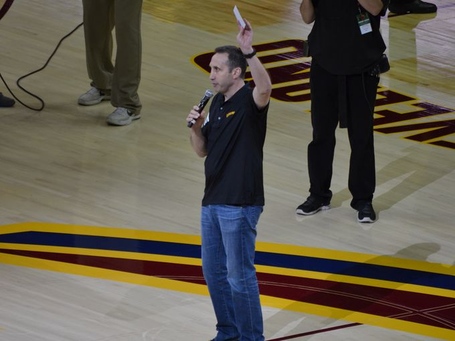 10) David Blatt is going to be a very popular head coach. Blatt showed up to the scrimmage wearing jeans, Sketchers, and a short-sleeved polo. He looked very comfortable and seemed to have a great relationship with his players, Kyrie in particular. He is going to do very well in media interviews and just generally appears to be likeable and popular.