The Cavaliers have a new center, Spencer Hawes. How does he fit?

So the Cavs have Spencer Hawes. I was pretty shocked. We just saw Tyler Zeller destroy him with the best game of his career, so what gives?

The elephant in the room, of course, is what Hawes has been lately, which is not very good. In his last 20 games, Hawes is shooting 38% from the field, and 32% from behind the three point line. There are a lot of things that factor into that though, I think. The Sixers are very obviously tanking, and the entire team is barely trying. When the Sixers got off to their fast start, Hawes was a huge part of that, and he was really good for a large chunk of the season:

There is no real way to know why he has dropped off so severely. If you think it's because he's not very good, well, you probably don't like this trade. If you think that it is because he was worn down by trade expectations and the tanking, then you should be on board. Offensively, Hawes' skill set meshes well with the Cavaliers, and they really didn't give up much to get him. Remember, Hawes is playing for a contract and is only 25 years old -- so he'll probably be trying a bit harder now that he's in Cleveland.

Asset impact: What did the Cavs surrender for Hawes?

The Cavs traded Earl Clark, Henry Sims, and two 2014 second round picks (they traded their own and the one they got from Memphis. Cleveland will still have Orlando's 2nd rounder). Clark, who had recently fallen out of the rotation, and Sims were both most likely gone after this season. Sims has had some good minutes lately, but Hawes is certainly far superior.

Second round picks are valuable, and there has been some hand wringing nationally because the Cavs are using them for the rentals of Luol Deng and Spencer Hawes (assuming, of course, that they're rentals). In a vacuum, that makes plenty of sense. Second round picks are cheap, and help with roster flexibility, you cannot just toss them about carelessly. Here's the rub: Prior to this trade, the Cavaliers had 4 picks in this draft, their first, Orlando's second, and the two picks they traded to Philadelphia. In 2015, the Cavaliers have their first, Miami's first (top ten protected) and Memphis' first (protected 1-5 and 15-30), plus their second round pick. That's a possibility of 7 picks in two drafts. For a team that has 8 players that are under 24, and with less than three full seasons of experience, that is far too many. They were never going to use them all. Could they have made a better deal? Who knows. Could they have moved up in the draft? Who knows. As is, they have kept their first round picks, and Orlando's second rounder, which should be the best 2nd round pick that they have.

If there is a potential trade for a superstar out there, it is not going to fall apart for lack of second round picks and that heavily protected Sacramento pick.

Offensive impact: How does Hawes fit?

We'll start with Hawes' shot chart, to get an idea of where his hotspots are: 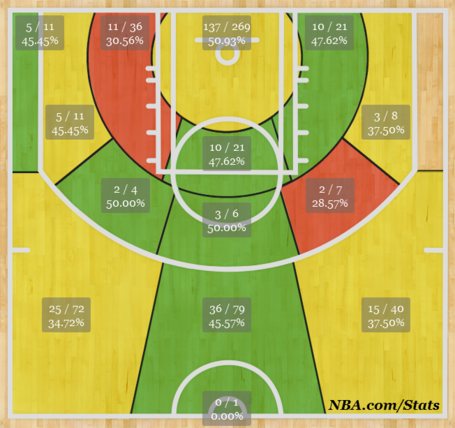 The very first thing that jumps out at me is the prowess and shot frequency from the top of the arc, and overall he is very good above the break. This is extremely important. Other than that, he's decent inside and an OK midrange shooter (overall 39.4%).

The Cavs start a lot of their sets with a pick or dribble hand off at the three point line and Hawes fits into that very well. First, Hawes has to be respected out to the three point line, which takes a lot of pressure off of Tristan Thompson on one of the low blocks, or in the mid post area. It's a small change, but a huge one. Because the second guard, whether it's Dion Waiters, Kyrie Irving, Jarrett Jack, CJ Miles, or Matthew Dellavedova will camp in one of the corners or above the break on the opposite side of the screen. With an opposing big sucked out of the paint, and their guards glued to the ball handler and off guard, the Cavs suddenly have space for Luol Deng cutting off the ball or the ball handler to get off a cleaner look at the rim coming off the screen. Cavaliers guards Dion Waiters and Kyrie Irving, 14th and 17th in the NBA respectively in total drives, will greatly appreciate the added space in the lane.

Hawes is also a very competent passer, averaging over three assists a game. The Cavs run a lot of action with Anderson Varejao organizing the offense at the elbows, running rub screens off of him and letting him look for an open man, Hawes is very capable of running this, which provides some systemic continuity.

Frankly? Probably not. Hawes FG% allowed at the rim is 52, which is line with Anderson Varejao and Tyler Zeller. He shouldn't be a glaring weakness now that Mike Brown has stopped having the Cavs bigs hedge on pick and rolls. He's an ok shot blocker, averaging 1.6 blocks per 36 minutes for his career, but nothing special. It's not an improvement, just more of the same. Although it's worth noting that Hawes was on a truly horrible team with roughly 3 other NBA players in Philadelphia. He'll have more help in Cleveland, probably exert more effort, and the Cavs don't play at such a ridiculous pace.

Roster impact: Where does this leave the Cavs' bigs?

Anderson Varejao - Ideally, this moves Varejao to fewer minutes and a bench role. Neither of those is an indictment of his talent. Hawes and Tristan Thompson are an ideal pair, and Hawes also fits well with the rest of the Cavs starting unit. Varejao, who will miss his 5th straight game tonight against the Toronto Raptors with back soreness, is best suited to 25-30 minutes a night to protect his health as much as possible. Certainly he can play the 4 next to Hawes and still close games, but reducing the wear and tear on his creaky body is paramount and will maximize his output. That is, of course, if he is healthy. The scary thought I had when learning of this trade is that Varejao's problems run deeper than the Cavs are letting on. It's been 11 days since the Cavs said Andy needed a game off for being sore, which just seems odd to me. Hopefully this is not the case. For what it's worth, David Griffin shot down the idea that Varejao's injury is more serious than the team is letting on.

Tyler Zeller - Zeller is the big loser here. He's recently has been playing very well, and will probably lose most of his minutes to Hawes and Varejao, as the teams third center.

Tristan Thompson and Anthony Bennett - I'm not sure how many minutes Hawes will take from them. Thompson figures to stay in the 25 to 30 minute mark, depending on who is hot, leaving 18 to 23 minutes for Bennett, provided Mike Brown does not use Tyler Zeller or Anderson Varejao at the 4. Bennett could also get some run at the 3, but with CJ Miles behind Luol Deng, there doesn't seem to be much opportunity there.

Overall, how did the Cavs make out?

If it's the Spencer Hawes from early this year, this is a very good trade. They didn't give up much, greatly improve their floor spacing, and a bench unit with Varejao/Hawes, Waiters, Miles, Dellavedova, and Anthony Bennett is a strong group.

Sure, making the playoffs to get swept or win a game or two might seem silly, but indulging in that ignores that the Cavs are closer to the playoffs than they are to a top 5 pick. As long as they're playing hard, Kyrie Irving, Dion Waiters, Tristan Thompson, Matthew Dellavedova, and Anthony Bennett is not one of the 5 worst teams in the league. Dumping veterans around them won't matter if they're playing the right way, and if they aren't, adding veterans around them won't matter much either. The Cavs go as they go, and the way they're going right now, Hawes should help them quite a bit.

**All Stats Via NBA.com/Stats unless specifically noted.