Cleveland Cavaliers vs. Phoenix Suns Preview: Kyrie Irving is aware of how important these games are

The Cavaliers start another West Cost road trip. It's now or never.

Share All sharing options for: Cleveland Cavaliers vs. Phoenix Suns Preview: Kyrie Irving is aware of how important these games are

The Cleveland Cavaliers are 24-40. Before the season, most people thought that the Cavs had a decent chance at making the playoffs in the Eastern Conference. The ESPN NBA Forecast in the summer projected the Cavs to go 39-43 and be the 8th seed in the conference. Today, the Cavs would have to go 15-3 in their final 18 games to hit that mark. For some reason, I don't see that happening.

The Phoenix Suns are 36-27. Before the season, most people thought that the Suns would be an absolute train wreck. I'm not sure there's ever been a team the the collective NBA community has been more wrong about. The ESPN NBA Forecast in the summer projected Phoenix to go 20-62 and finish dead last in the Western Conference. Today, the Suns would have to win negative 16 games in their final 19 to hit that mark.

It would appear that people were wrong about both of these teams. Tonight, they will play each other.

Can I get some music?

Pay no attention to how creepy this music video is...just listen to the song.

At unlikely as it seems, the Cavs still have a very slim chance of making the playoffs. The Suns are locked in their own battle for a playoff spot out West, but that's more of a heavyweight fight. The playoff race in the East is more like a couple of kittens pawing at a ball of yarn, but then getting scared and skittering under the bed when the ball of yarn takes a weird bounce. In this scenario, the Cavs, Knicks, Pistons, and Hawks are all kittens. But as you can see, they are quite skittish.

If the Cavs want to give themselves any chance at sneaking into the playoffs at this point, they have to win virtually every game possible. There's so many teams ahead of them that every loss is a devastating blow to their chances. Naturally, the Cavs are about to have 6 extremely difficult games in a row. Here's their next 6 games: 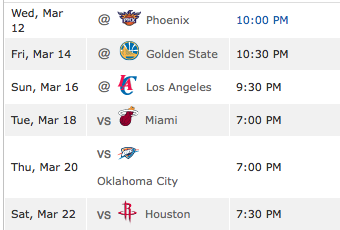 Yeah, this is going to be fun.

Kyrie Irving talked about this upcoming road trip after practice yesterday in an interview. He was talking about how this is the closest thing to meaningful games down the stretch that he's played since he entered the NBA. And he's absolutely right. We've never seen Kyrie in this situation before. Usually, the Cavs are shutting him down for minor injuries and nobody really cares if they win or lose. Personally, I'm excited to see Kyrie step up and try to drag this team to the playoffs. I think that can be big for his development and maturation. The Cavs obviously intend on playing lots of meaningful games in future seasons, so why not get some practice now?

The alternative, of course, is to pack up and go home. You could give heavy minutes to Sergey Karasev and Tyler Zeller instead of C.J. Miles, Jarrett Jack, and Anderson Varejao. I've seen some people advocating for this "play the young guys" approach. It's an approach I wholeheartedly disagree with right now. Karasev is super young -- he'll get his chance. Right now, the Cavs need to work on building something. I don't know which players on this roster will be on the roster next season, but some of them will be. Most likely, the ones that will be are Kyrie, Dion Waiters, and Tristan Thompson. Others will be too, but those are the only real sure bets. I think it's important that those guys get some experience playing with veterans and playing for a team that is actually trying to win tough games. Kyrie said it himself, he's never played in meaningful games in an NBA jersey. If you pull the plug and stop trying to win, you make these potentially meaningful games meaningless. That's not a good idea.

Sticking with the Kyrie-heavy theme here, look at the point guards that he's going to face in the next three games. Goran Dragic tonight. Stephen Curry on Friday. Chris Paul on Sunday. Holy shit. Each is different and each is deadly in his own way. It's a big test for Kyrie and I'd love to see him step up and put together some impressive defensive efforts against those studs.

I didn't talk much about the Suns in this preview, but you can get lots of great Suns coverage over at Bright Side Of The Sun. Phoenix has an incredibly fun team to watch. Dragic is definitely one of my favorite players in the league and it's not just this season that makes me say that. I remember watching him carve up the San Antonio Spurs in the playoffs a few years back. The guy is just fun as hell. I don't have much faith in this Suns team this season, but their future is pretty bright. They'll get Eric Bledsoe back at some point and maybe they'll make the playoffs. They probably won't win more than a game or two if they make the playoffs, but it's something. And they have great momentum going into next year. They have a young, attractive team going forward. And even if they miss the playoffs, there's nothing wrong with what they're building in Phoenix. Lots of reasons to be excited about the Suns.

The Suns will be without P.J. Tucker after he sort of hit Blake Griffin in the face. I'm a hopeless optimist. The Cavs win 105-102.