Should the Cavaliers be trying to win basketball games, or should they be trying to develop their young players? It's a false choice.

The Cleveland Cavaliers have made six first round draft choices in the past three seasons. Kyrie Irving, Anthony Bennett, and Sergey Karasev are all out hurt. And the Cavaliers' chances at making the playoffs realistically faded some time ago.

Mike Brown, both before and after the Rockets game Saturday night, didn't appear interested in that at all:

"We are trying to win … For us, to get as many wins, so that these guys can experience that this late in the season playing the right way is something that I’m pushing, and I’m all for."

There is this idea that Mike Brown doesn't like to play young players. I don't think this is fair. After all, Tristan Thompson is, in all likelihood, going to lead the Cavaliers in minutes this season. Kyrie Irving and Dion Waiters will be in the top four of minutes played this season.

And it isn't that Brown doesn't see the benefits of getting Zeller or even Matthew Dellavedova minutes. I asked him if he thought it was good for Dion in particular to see big minutes in the absence of C.J. Miles and Irving:

Mike Brown expounded a bit on what he's seeing from Dion on Saturday. If you look closely, you can probably find a few reasons why Waiters hasn't been in the starting lineup for most of the year; it has nothing to do with what Brown thinks Waiters can be:

"Dion’s done a tremendous job scoring the basketball. He’s scored from all three levels. He’s scored in a lot of different ways. He’s done a nice job of moving the basketball also, and not keeping it at one spot. There’s still some areas that I talk to Dion about, that he’s got to continue to work on. Defensively, at times he gets a little lost, like some of our other young guys do. He’s big, he’s strong and athletic. He’s got to rebound for us. He’s got to finish, he’s got to get to the free throw line. He’s got to run. If he can rebound and run at a high level as well as defend consistently, he’s going to be an amazing player. But those are areas … the general public can’t see. It’s more than just going 11-20 from the floor. Dion’s learning and he’s growing and he’s getting better, but he still has a high ceiling, which is a good thing because he can be a lot better than he is now."

The following night, in New York, Waiters played the type of game that had me jumping out of my seat in the University of Toledo law library where I should have been studying. He ended up with five rebounds, something Brown has repeatedly stressed. He ended up scoring 20+ points, despite deferring to Jarrett Jack at times. In fact, perhaps the biggest shot of the game came when he made a spot-up short corner three. It was really awesome.

Here's the thing: Dion hasn't arrived. He might be turning a corner, but it isn't THE corner. There isn't a switch that can be flipped. Multiple switches need to be flipped. I say this for a couple reasons.

First, Dion's only problem playing isn't just finishing near the basket. Like Mike Brown says above, there's a ton of things he can get better at. This is a good thing, it means what he can be is ... well, it's worth being excited about. For fun, take a look at Waiters' shot chart over the last 23 games. 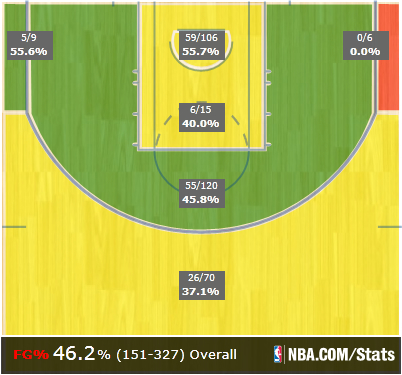 I don't know that those mid-range shooting numbers hold up like that, but pretty darn good nonetheless. It represents major improvement.

Second, I think I made a mistake with Tristan Thompson last year. He played really well to end the year, started passing better, finished with a PER of 16+. I think I read too much into it. He still had a long way to go then. In defense, I did think the hand change might end up meaning a reset on some of his development. In a few ways, I think I predicted his struggles offensively. But I projected defensive growth that hadn't quite been made yet. I'm pretty interested in not making that mistake with Dion.

Tyler Zeller is also making the most of his minutes, and he set me straight on something after the game on Saturday as well. When I wrote about him three weeks ago, I talked a bit about his defensive struggles, in particular bringing up his propensity to foul:

He has given the Cavaliers the only rim protection they get, even if it isn't particularly good or consistent. He is still fouling at an alarming rate, at 5.1 fouls per 36 minutes, which is indicative of a player a step slow or physically overmatched. This description would seem to fit Zeller, though the eye test says Zeller has been a more capable defender this season.

Well, I think my analysis is alright, but I wanted to give Zeller a chance to counter. Here's what he said:

"You gotta be aggressive with the minutes you get. I know that most nights I'm not gonna get a ton of minutes so I am able to make my fouls count."

The point he is making is a good one. Sometimes strategy dictates a foul being the right play. Whereas Anderson Varejao knows if he is going to play 30+ minutes that he can't pick them up quickly, Zeller is free to do it when the play says it's the right way to go.

Against the Rockets, Zeller was pretty darn good offensively. He lurked baseline a few times for easy dunks after Waiters or Jarrett Jack penetration. I asked him about it:

Zeller is a smart player, and he is looking like pretty good value for the 17th overall pick in the 2012 draft. The Cavaliers are hanging tough with pretty good teams, and stealing some wins from teams desperate for them in the Knicks and Golden State Warriors.

The Cavaliers are trying to win, and the young guys are guys are helping lead the way. Things could be worse.