The Spurs are good at basketball. The Cavaliers got a reminder tonight.

I had not heard of this upstart club from San Antonio before tonight.

I had a buddy call me, who is from Dallas, and he mentioned the Spurs. So shocked I was that someone else had heard of the team that I was confused to see in my morning breakdown, that I asked him a few questions.

Did you know they are good at moving the ball around? Really good, apparently. They had 39 assists of 43 field goal makes tonight. The Cavs defense, known from here to Narnia as a juggernaut that never misses rotations, had it's hands full.

It didn't stop there for Thompson. In a dispute with coach Mike Brown about the different uses of maple syrup (Brown is #TeamBuffaloSauce on Mac N Cheese, Thompson is #TeamMaple) Thompson would sabotage the team for the entire evening. Among his most egregious offenses:

- Sneaking a whistle into the arena and calling 24 fouls on the Cavaliers.

- Jumping in front of the ref's field of vision on many Cavalier drives to the hoop, leading to missed calls.

- Spiking Luol Deng's pre-game cup of Earl Grey, rendering him mostly useless, except for when he would also block a ref's line of sight to prohibit a justified foul in favor of the hometown Cavaliers.

One day, we rid these lands of the scourge that is Tristan Thompson. Until then, we will dwell on the things to like from tonights game:

- Spencer "Steve" Hawes was again awesome. He had 20 points and made 3 triples. He is shooting 53% from behind the three point line as a Cavalier, and has made either 1 or 3 triples in every game. The spacing is pretty evident.

- Anthony Bennett had 14 points. Garbage time or not, him being able to hit his jumper consistently is very important.

- Dion Waiters is healthy again. He had 24 points and was driving to the basket quite a bit. Looking at something else, I grabbed his shot chart for the last 20 games he's played, it's kind of nice, it's also important, because it shows progression in most of his problem areas. IF the Cavaliers want to be good, he is probably the key, unless they sign an awesome player or Tristan Thompson or Anthony Bennett explode this offseason. 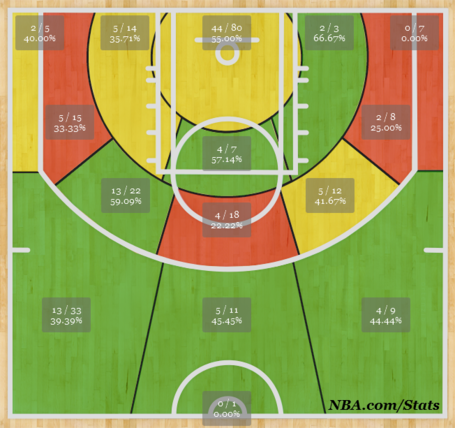 On to the next one though. The Cavs are in Charlotte on Friday. Charlotte has a good defense, but the worse Zeller. They also have Al Jefferson, who is very good. The Cavs will probably play basketball against them.