Breaking down the recent improvements from Dion Waiters and Tyler Zeller

The Cavaliers 2012 draft class has shown progress of late.

Share All sharing options for: Breaking down the recent improvements from Dion Waiters and Tyler Zeller

The Cleveland Cavaliers 2012 NBA draft contained a surprising choice at 4th overall in Dion Waiters, and a surprising trade up for Tyler Zeller. Neither stood out with particularly impressive rookie seasons. Waiters got better as the year went on in an injury plagued freshman campaign, while Tyler Zeller found himself playing more minutes than he could have dreamed of when Anderson Varejao went down for the season in December.

This season, the hype for both players was considerably diminished. From Andrew Bynum's arrival in Cleveland to Anthony Bennett being the number one overall pick -- from Mike Brown's return to the hype of Kyrie Irving's third year in the league -- Waiters and Zeller were able to enter the 2013-14 NBA season without a ton of media attention.

I asked Waiters about the differences between training camp in his first and second seasons, and whether it was easier this time around before the season started.

Well, we all know how the season started. Zeller wasn't even in the rotation to start the season, as Andrew Bynum and Anderson Varejao held down the center position. And, whether it was the difficulty of trying to incorporate Bynum or the lack of an offense installed by Mike Brown, nearly every Cavaliers player struggled offensively in the early part of the season.

But Zeller and Waiters have been trending in the right direction. Let's take a look at both.

Tyler Zeller spent the offseason doing anything and everything to put on weight. But then training camp got started and Zeller had to undergo an emergency appendectomy. Most of the weight was gone. However, it hasn't stopped Zeller from making huge strides in his second year as a pro. A year after being forced to start 55 games after Varejao went down, Zeller had to wait for Bynum's rest in the 2nd games of back to backs and then ultimately for Bynum's dismissal from the team to really get consistent minutes.

To say he has made the most of it would be an understatement. Let's start with his defense. He has given the Cavaliers the only rim protection they get, even if it isn't particularly good or consistent. He is still fouling at an alarming rate, at 5.1 fouls per 36 minutes, which is indicative of a player a step slow or physically overmatched. This description would seem to fit Zeller, though the eye test says Zeller has been a more capable defender this season. 82games.com shows Zeller giving up a much higher PER than he himself is putting up.

Long story short, it appears Zeller still has a lot of room for improvement on the defensive end. His limited minutes have probably helped perception of his defense as it keeps him from getting exposed. Zeller wasn't drafted to be a great defensive big though, and his offensive progress is cause for optimism.

Zeller has improved his player efficiency rating, rebounding rate, and true shooting percentage to a remarkable degree. In January, I asked him about his progress and if it had to do with comfort level and understanding his limits and strengths: 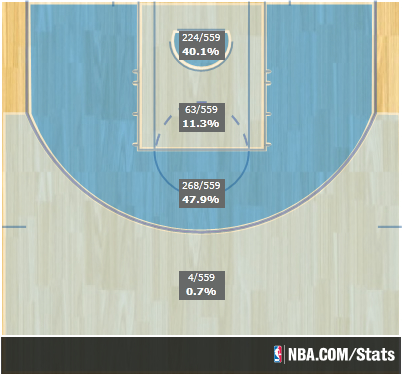 This chart shows that almost half of Zeller's shots in his rookie season came from midrange. You can look at this in a couple of ways: 1) midrange shots are not efficient; they are long and you only get two points from them even when they do go in or 2) centers that can shoot from midrange are valuable because they can open up spacing for guards to drive. The second one is largely dependent on the center actually making the shots. 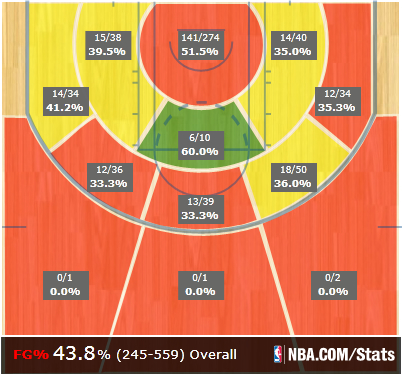 So much red in the midrange. On top of this, Zeller was 10 full percentage points behind the league average for forwards and centers finishing in the restricted area per this chart from Jacob Rosen of Waiting for Next Year. It was a tough rookie year. Let's see what Zeller has done to improve. 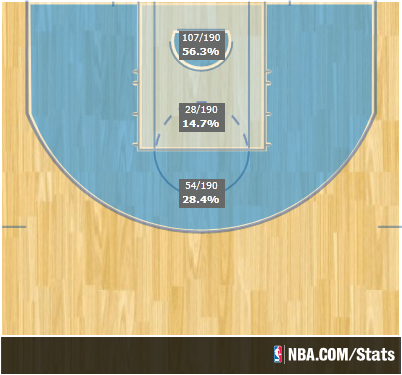 Wow! Zeller took 48% of his shots from midrange last season. So far this year? Just over 28%. Given his inability to consistently convert from there last year, this seems like a pretty great adjustment. You want Zeller to be able to stretch the floor. Until he can do it consistently, though, it shouldn't be the main focus of his game. Now, Sam Vecenie has been all over this since his rookie year. Zeller's strengths in college were scoring near the basket. He is going back to that a bit.

But this just tells us where Zeller is shooting from. Let's look at the next chart. 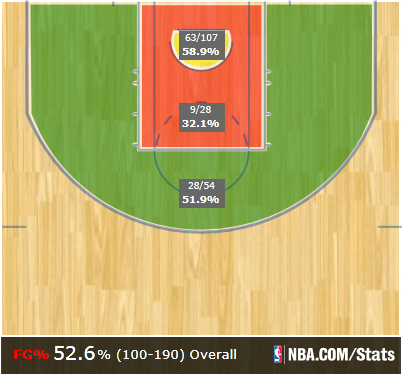 Zeller's totaly field goal percentage is up in large part because he is taking shots closer to the basket, and perhaps because he is being judicious in when he shoots from midrange, he has been fantastic from there thus far this season. When he gets all the way to the rim, he isn't converting at a great rate but he is pretty close to average from there.

Zeller is taking what defenses give him and getting all the way to the rim. It's led to a huge increase in efficiency. If he can keep building on this he will be a great value for the 17th pick in the draft and for the amount of money he has coming to him the next two seasons on his rookie deal. His defense needs work but he will have another offseason to bulk up. We aren't very far into his NBA career and we've seen some really promising results so far.

I am not going to go into the amount of detail that I did with Zeller up above. This is in part because I, along with eraulli, wrote a lot of words on Dion Waiters earlier this week. Waiters has been maddeningly inconsistent. His WS/48 is atrocious, but the Cavaliers have generally been better with him on the court than off. He has a healthy usage and a bad PER, but his three point shooting has improved and lately his attitude has been good.

But over the last 14 games, Waiters has played pretty darn well. He's done this before.

He puts together stretches of good play where he finishes at the rim and then, well, doesn't. Young players are bound to be inconsistent, so it makes sense. It's undeniable that Waiters is incredibly athletic and strong. When he is mentally there, it makes you think his potential is something that he might be able to harness for more than a few weeks at a time.

So let's take a look a look at what Dion was doing before the last 14 games -- and then we'll look at his recent success. Here is his shot chart for the 2013-14 season prior to January 21st: 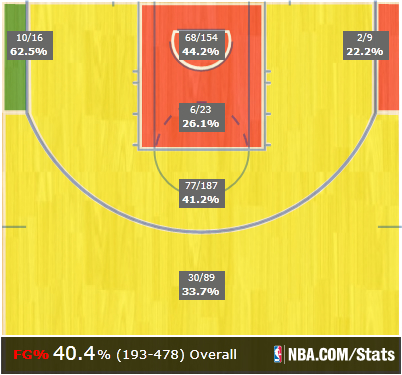 The 44% at the rim is a full 15% lower than the league average in that zone. For a guy who is fantastic at breaking down his man off the dribble and getting to the hoop, this is devastating; it neutralizes the special skill he has. There are lots of reasons for this. Waiters attacks the basket looking to avoid contact and finish. He doesn't have a great left hand at the rim.

While Kyrie Irving isn't elite at finishing at the rim, Waiters could do well to learn a bit from him. Irving does his best to create contact, and then uses his body strength to gather himself and finish. It leads to more trips to the free throw line for Irving. Given Waiters' bulk, you would think he would be capable of absorbing contact and still putting up a good shot attempt.

Here's his shot distribution chart from that time span. 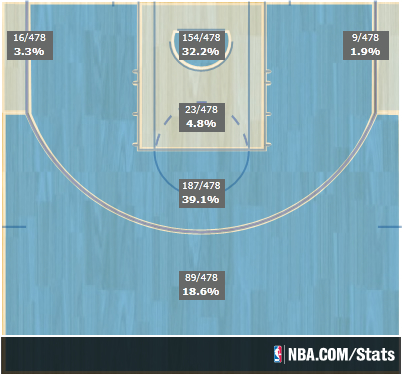 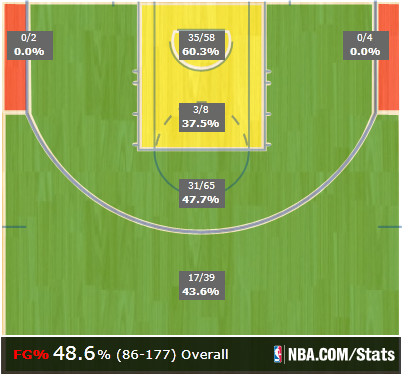 SO MUCH GREEN. Okay, so it doesn't seem likely that Dion can keep shooting 48% from midrange. And he's likely not a 40% three point shooter right now. THAT'S FINE. This is a small sample size. But even though the zone at the rim is yellow, that's the encouraging part. Dion can get there at will; if he can finish once he gets there at a competent level his value jumps a few levels.

The shot distribution is largely the same, though he is taking a few more threes. This is a good thing. As Irving and Waiters (hopefully) continue to learn to play off of each other there should be plenty of spot-up opportunities for both.

So what do you think? Zeller and Dion have been playing a bit better lately. Zeller still needs to get better defending, and Waiters needs to find more consistency, but the talent to succeed is there. Hopefully they can continue to build on this over the last 20 games of the season and Cavs fans can feel pretty good about the 2012 Draft, even if it wasn't perfect.