Kyrie Irving has been really good this season.

Share All sharing options for: Is Kyrie Irving making the third year leap?

The expectations for Kyrie Irving were enormous heading into the season. Players like Derrick Rose had used their third full NBA season to catapult themselves into superstardom. Irving followed up his Rookie of the Year campaign with an All-Star bid in his second year. The Cavaliers wanted to make the playoffs. Could Kyrie Irving elevate his game and help the Cavs get there?

Well, the Cavaliers started the season terribly. On December 10 the Cavaliers entered Madison Square Garden to play the Knicks with a record of 7-13. Irving was shooting 39/30/78 from the field. Given his first two seasons saw averages of 46/39/86 ... well, these were pretty concerning numbers. Add in the fact that Irving had ended last season in a shooting slump and some concern was certainly warranted.

His turnover rate was stable, and his defensive intensity had appeared to improve, but this was Kyrie Irving, and Kyrie Irving's value as a basketball player is based largely on his ability to score more efficiently than just about any guard in the NBA. Instead, his shot chart looked like this: 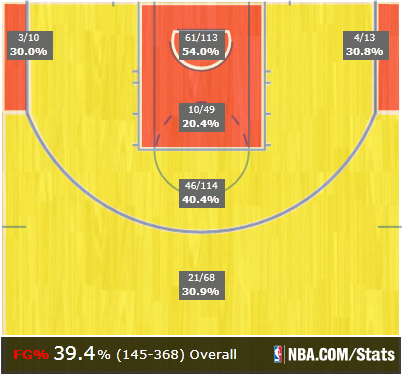 On top of this, as I wrote in this piece analyzing what criticisms of Irving were fair this season, he was taking more midrange jump shots than ever. After working on adding a floater in the offseason he abandoned it very quickly. Could he turn it around?

He turned it around, and then some

Kyrie Irving walked into Madison Square Garden that night and scored 37 points on 23 shots, and handed out 11 assists to just one turnover. For the most part, he hasn't looked back. Starting with that night in Gotham, Irving is shooting 45/40/91 over 39 games for a true shooting percentage that exceeds what he accomplished in his first two seasons in the league. His turnover rate of 10.9% in that time is significantly lower than the 14.7% rate from his first two years.

The shot chart is pretty fun. 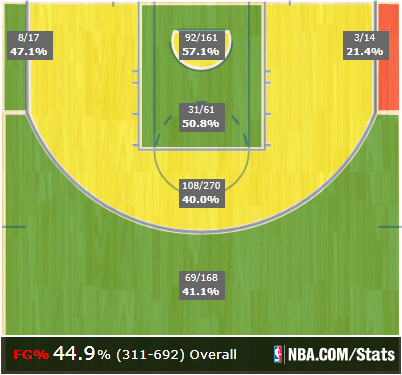 Even given his awful first month, Irving's WS/48 is an improvement on both of his first two years in the NBA, thanks in large part to the metric crediting him with improved defense. And, knock on wood, but a big question mark for Irving heading into the year was whether he could stay healthy. With 20 games remaining in the season, Irving has already equaled his career high in games played.

Lately, Irving has looked even better with Spencer Hawes. Tristan Thompson has scored the 2nd most points of any Cavalier this season. Whatever you think of Thompson, he clearly has a long way to go before he is a consistent offensive weapon. Irving, quite frankly, hasn't had much to work with. This has made the entire notion that he doesn't make his teammates better pretty silly. Anderson Varejao has a nice midrange jumper at this point but he isn't a consistent offensive option, even if I would like him to get his usage up a bit once he comes back. Giving Irving a reliable pick and roll and pick and pop option, as well as more shooters on the perimeter to set up will help him, and the Cavaliers, be more dynamic offensively.

Irving's player efficiency rating and raw shooting percentages paint the picture of a player at best stagnant, and perhaps even regressing in his third season. Shrug off November, though, with the Cavaliers struggling to incorporate Andrew Bynum and Mike Brown clearly more interested in defense, and things look much better for Irving. This guy is good.

Kyrie Irving turns 22 later this month. He is younger than Michael Carter-Williams. He has started and been the MVP of an All-Star game. His on court accomplishments may not have quite caught up with the hype that has followed him since his sublime rookie season, but there has been enough indication of late that he will get there in good time.