The Cavaliers aren't going to the playoffs. Instead, they're going to the NBA Draft Lottery. Will they be able to get lucky again?

The 2013-14 NBA season did not go as the Cleveland Cavaliers had hoped. The team did not live up to expectations and will be sitting at home watching the NBA playoffs instead of hosting a few games at Quicken Loans Arena. By missing the playoffs, the Cavs have also "earned" themselves a spot at the NBA Draft Lottery.

With just one game left in the season, the Cavaliers have a record of 32 wins and 49 losses. That's a modest improvement from last year when they had just 24 wins compared to 58 losses. Those 32 wins currently give Cleveland the 9th worst record in the NBA. They were tied at 32 wins with the New Orleans, but the Pelicans beat the Thunder on Monday night to secure their 33rd win of the year. New Orleans and Cleveland both have one more game and if they end up with identical records, they flip a coin and split the lottery balls between the 9th and 10th spots. Last time the Cavs had a coin flip with New Orleans, they ended up winning the flip...but that was bad. New Orleans went on to win the lottery and get Anthony Davis. It sure would have been nice to have Anthony Davis.

Here's what the standings look like right now. Not a lot can change for the Cavs with just one game left. New Orleans will play the Houston Rockets. Cleveland will play the Brooklyn Nets. I wouldn't be surprised to see Cleveland win that game because the Nets don't have a ton to play for. The same goes for New Orleans and Houston. 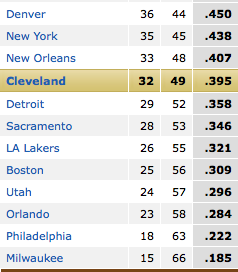 We've been used to the Cavs having great odds at a high draft pick. But this year, the team was a little better. So the NBA Draft Lottery will be a little less exciting for Cavs fans. But hey, there's still a chance that Nick Gilbert can work his magic one more time.