The Australian import has surpassed all expectations in his rookie year

The 2013 NBA draft has been devoid of difference makers thus far. Michael Carter-Williams will likely win the Rookie of the Year award, and he's been pretty mediocre. The Cleveland Cavaliers know the pain more than most. Draft choices Anthony Bennett, Sergey Karasev, and Carrick Felix have either struggled or been buried on the bench or hurt or all three.

But the Cavaliers have a rookie in the rotation. And he has been playing really well! Indeed, Matthew Dellavedova, the 23 year old undrafted guard out of St. Mary's has been a crucial part of the Cavaliers late push to make the playoffs. With Kyrie Irving and C.J. Miles missing an extended amount of time, the Cavaliers desperately needed a reserve guard to step up.

Enter the Australian honey badger. Since February 25, Delly has been fantastic. It encompasses 18 games, and I largely picked that start date because it is when a long cold spell finally came to an end for the rookie. All the rookie guard has done in that time is shoot 49% from the field, 48% from the three point line, and 78% from the free throw line, and he has done it in almost 23 minutes of action a game. He might be the only Cavaliers guard that functions better without the ball in his hands, and as such, has proven incredibly valuable.

Check out his shot chart over the 18 games: 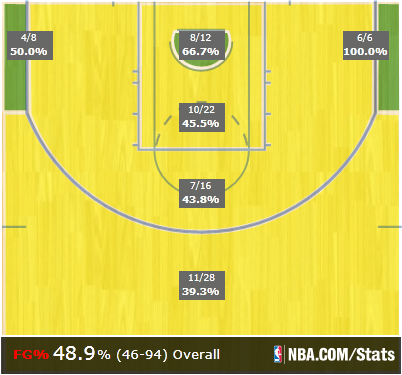 In each of the yellow areas, Delly is actually slightly above average. It's only 18 games, of course, but it couldn't have come at a better time for Cleveland. But it isn't just his hot shooting that has made him a favorite of both fans and Mike Brown. I don't know of a place where I can find stats on technical fouls drawn, but I have to believe Delly at the top of the leaderboard on that one.

And it's clear his teammates respect him:

Yeah, that's Spencer Hawes getting in David freaking West's face to stand up for Delly. Especially in the early part of the year, a lot of Cavs fans questioned the toughness and heart of the team. It's a big reason why Dion Waiters is a fan favorite. With Delly and Hawes you have guys who don't mind getting in guys faces or playing physical basketball. I don't necessarily know how you determine how to value that, but it's something.

Dellavedova's numbers are pretty impressive over the whole year. It really looks like he will have a place in this league for a few years, particularly if his shooting becomes more dependable. A 42/37/79 shooting line for a rookie, even at his advanced age, is pretty impressive. For a player who has played over 1100 minutes on a 30-45 team, his on/off court ratings are simply incredible.

Is it still a small-ish sample? Yes. Is on/off court data perfect? Far from it. But it's encouraging. Here's his shot chart over the whole year because why not? 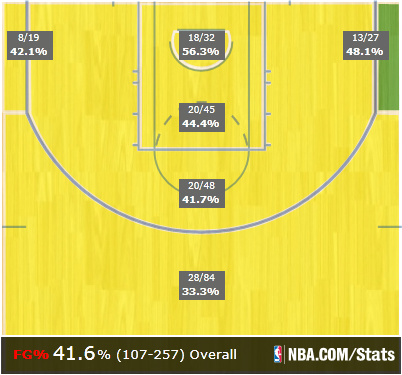 For a reserve guard with a low usage who keeps the ball moving and plays hard? That's pretty good. If he can become a legitimate threat from three point range on a more consistent basis, he will be an asset for the Cavaliers for some time. The guy has no fear, clearly thinks he belongs, and has been proving it for most the year. He's been a fun part of a season that all too often has lacked it.

I have no idea what his ceiling is. But I'm glad we will find out while he wears the Wine & Gold.