The Cleveland Cavaliers have made some questionable selections in the NBA Draft recently. On Thursday night, they did no such thing. General manager David Griffin made the easy choice and selected Andrew Wiggins with the first overall pick. On the day of the draft, national writers and analysts give out their post-draft grades. These grades are usually silly because we really don't know how these prospects will pan out.

But it's still fun to see that basically everybody thinks the Cavs did the right thing when they took Andrew Wiggins. Let's run through the grades.

Joel Embiid's navicular fracture eliminated him from the equation, leaving the Cavs selecting either Wiggins or Jabari Parker. The former is the right choice, as he offers Cleveland a two-way presence with an insanely high ceiling. Right away, he'll be an impact defender, even if he still has to assert himself more on the offensive end while continuing to develop his jumper.

The Cavaliers took the right players who made sense for their slots and the team. Wiggins has tremendous upside and could blossom alongside a point guard like Kyrie Irving. Harris is the shooter that Cleveland needed. Anyone criticizing these picks needs to realize that, while messing up the top pick was a little harder this year, it still was possible.

He didn't rack up absurd scoring numbers like Kevin Durant or propel his team to a national title like Carmelo Anthony, but the one-and-done star still flashed enough upside to merit being a top pick. Wiggins showcased an ability to defend multiple positions, an explosive secondary jump around the rim and a knack for finishing with aplomb in transition. 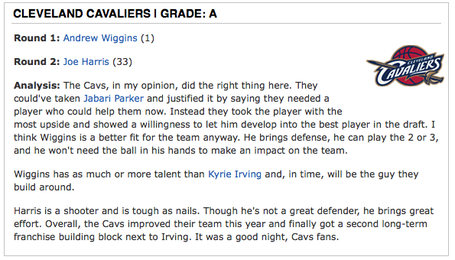 NBA draft: The Cleveland Cavaliers have lots of options with #1 overall pick