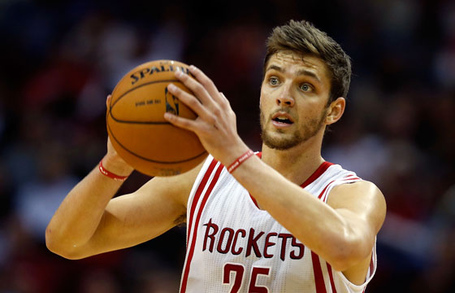 As most know, I have been a massive proponent of fit. Heck, I wrote a column on the fit of perimeter combinations. I think paying big $ for Chandler Parsons or Gordon Hayward causes some serious fit issues.

Chandler Parsons' usage rate is only 19.3%. This is obviously a below average, as usage rate is derived in order to make the average 20%, so this indicates that Parsons uses a below average amount of possessions and it could be assumed that he doesn't need the ball in his hands to be successful.

One quibble I have with usage rate is it doesn't factor in assists. Obviously assists can be synonymous with ball movement, but I would hazard a guess that 80% of assists are generated off of the dribble (this is a serious stab, there aren't any numbers that I know of that tracks this stat).

If we take 80% of assists to be generated off the dribble, we can take usage rate and add 0.8*assist rate to come up with something I will term "creation rate". This is an inexact science of course, and a pure estimate, but I'm interested at the results.

(Note: I have come up with this formula before checking results, so whether they fit my belief or not I will post them)

While the Cavs' projected rate slots right in line with all of these teams, a problem arises.

Chandler Parsons creation rate, the projected "third banana" of the Cavaliers trio is higher than any "third banana" on these teams apart from Mario Chalmers - who I would guess gets assists off the dribble at a rate much lower than 80%.

If we were to sign Parsons, you would think that either he or Dion would have to lower their creation rate to around 25 - the number of most of these "third banana's" on the list. I think Parsons could certainly do that, but if you're lowering his assist and usage rates, are you really getting what you paid for?

These numbers would also be higher for Gordon Hayward, implying a worse fit.

Lets say the Cavaliers send Dion Waiters, Alonzo Gee (team option, would be cut) and the Miami first round pick in 2015 to Atlanta for Kyle Korver and threw a 4 year, $56M contract at Gordon Hayward, then what would the creation rate look like? Korver's creation rate is 24.84, dead in line with the third bananas of other team's perimeter trios. The Cavs' creation rate as a trio wouldn't really fall, as Hayward's creation rate of 42.38 is actually higher than Waiters' and the creation rate of both Korver and Hayward likely wouldn't change much upon coming to Cleveland (Haywards I would assume would fall to around 39 or so due to playing with Irving).

I just thought this would be an interesting exercise, let me know in the comments if I am way off base here but I don't think signing Parsons or Hayward as currently constructed works. If we were to go with one of them, I would choose Hayward and try to move Waiters for a Korver-type player.