The Cavs went undefeated through round robin play at the Las Vegas Summer League. The LVSL Tournament starts today, and the Cavs will play their next game tomorrow against Toronto or Houston.

The Cleveland Cavaliers have had a very successful run at Las Vegas Summer League so far. Led by the trio of Andrew Wiggins, Anthony Bennett, and Matthew Dellavedova, the Cavs have not lost through three games, beating the Bucks 70-68, the Spurs 82-70, and the 76ers 86-77. Their record and impressive play has earned them the #3 seed in the LVSL Tournament.

The tournament between the 23 NBA squads and the D-League Select team to determine a Summer League champ begins today, with play-in games for the #9 through #24 seeds. Eight teams (top-seeded Chicago,  New York, Cleveland, Washington, Utah, Portland, New Orleans, and Sacramento) gained byes to play on Thursday. The bracket is posted below: 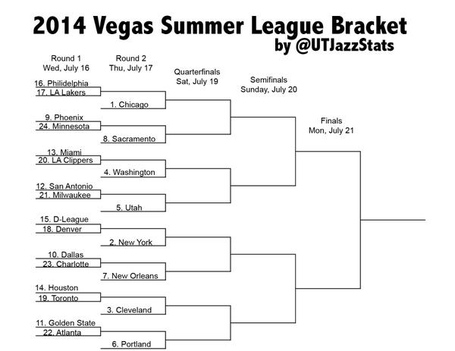 The Cavaliers will play the winner between the #14 seed Houston Rockets, and the #19 seed Toronto Raptors, and should play at 7:00PM 8:30PM at the COX Pavillion in Las Vegas.

Houston (1-2) beat the Clippers Tuesday, and have lost to the Trail Blazers and Heat. Houston also played in Orlando Summer League, and went winless. This was a bit of a surprise given their roster, which features rotation regular Donatas Motiejunas, and quality NBA prospects like Isaiah Canaan, Robert Covington, and Nick Johnson. The team also features Memphis product Geron Johnson, who tweeted me his highlight film during the pre-draft process.* That alone is enough for me to be pulling for the Cavs to face the Rockets on Thursday.

*Johnson's plugging of himself was in response to me not knowing who he was when he was invited to a pre-draft workout for the Grizzlies. He quickly deleted it, but it's still one of the strangest moments I've had on Twitter.

The Raptors (1-2), meanwhile, beat the Lakers on the inaugural day of Summer League, and then subsequently got blown out by the Nuggets and Mavericks. Their team features their newest acquisitions, the Brazilian tangles of limbs that are Lucas "Bebe" Noguiera and 20th overall pick Bruno Caboclo. It also features Dwight Buycks, John Shurna, and DeAndre Daniels, who have all be pleasant surprises for the Raps.

I'd personally like to see the Cavs battle either team. The Rockets have Johnson and it would be a ton of fun to watch Dellavedova guard Canaan in the backcourt. The Raptors would also be interesting, because Caboclo might be a good test for Wiggins because of his athleticism, and Shurna is perhaps the best three-point shooter the Cavs could encounter. Regardless, it would be nice to see the Cavs play as many games as possible, so tune in Thursday at 7:008:30 regardless of who they play.

UPDATE: It looks like Dellavedova will not be with the team tomorrow night. (Thanks somedumbname for pointing this out in the comments.)

Fun working w the boys at Summer League! Leaving to get ready for the #WorldCup w the #Boomers. Good luck rest of way- will be following!!