A player like LeBron makes everyone around him better. Specifically, though, he could save Anthony Bennett's career.

Anthony Bennett had one of the most disappointing rookie seasons ever for a number one overall pick. This is a well-known fact. He shot 36% from the floor, appeared disinterested in setting screens sometimes, and occasionally got booed by his home crowd. It was a disaster.

But fans of the Cavaliers are generally an optimistic bunch. There was no reason to write off Bennett after one bad season. Last month, Ryan wrote a nice article about how Bennett could still turn into a very useful player:

Bennett is capable of helping, even if he never lives up to the title of "#1 draft pick". He's got huge hands and a massive frame. He can shoot it pretty well and he can put the ball on the floor and attack. After so much consternation, frustration, and failure last year, he finally started to show those things. We saw him sprinting the floor and making hard cuts that led to massive slams.

So far, Bennett has looked pretty good during the Las Vegas Summer League. He's dropped about 20 pounds, and he looks much more sculpted than he did last season. Through three games in Vegas, he's averaging 14 points and eight rebounds per game on 44% shooting from the floor. He's still launching too many threes for my liking (he's just 2-11 from beyond the arc), but overall, things have looked promising.

The best news for Bennett's career may have come on Friday when LeBron James announced that he is returning to Cleveland. LeBron will probably make everyone look better, but he could be especially good for Bennett. (Presuming, of course, that Bennett is not included in a trade for Kevin Love, or anybody else.)

This is Bennett's shot chart from last season, via Austin Clemens of Fansided's Nylon Calculus. 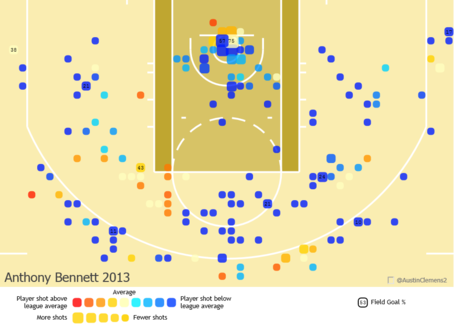 As you'd expect, it's pretty ugly. Bennett was launching from all over the floor. According to Basketball Reference, just 29% of his shot attempts came within three feet of the basket, while the majority of his attempts came from beyond 16 feet.

Bennett may be a stretch four in theory, but I'd really like to seem him focus on being a finisher right now. Kyrie Irving and LeBron will draw the majority of the attention from defenses. That should give Bennett the opportunity to cut to the basket for some massive dunks, which he is certainly capable of. LeBron, of course, is a tremendous passer, and it should be really fun to watch him create open looks for Bennett and Andrew Wiggins.

Consider the impact that LeBron had on another power forward in Cleveland: J.J. Hickson. Take a look at Hickson's shooting numbers, via Basketball Reference, from his second season in the NBA, 2009-2010, compared to those from his third season, which was his first without LeBron.

The average distance he was shooting from increased, while his field goal percentage went way down. He dunked less, and he was the beneficiary of fewer assists. Playing with LeBron is a lot easier than playing without LeBron.

One problem with all of this is that Bennett may not actually share the floor with LeBron all that often. Tristan Thompson has earned the right to be the presumptive starter at power forward, so it is likely that Bennett will be coming off of the bench and getting most of his minutes with other players from the second unit.

If, at some point, Bennett does get a chance to start alongside LeBron, he should reap the enormous benefits that come with getting to play with the best basketball player in the world. And that could be biggest factor in turning the "bust" narrative completely around.