Analysis: Why were Kyrie Irving's catch-and-shoot numbers so bad?

Ever since the Cavs signed LeBron James, questions about whether or not Kyrie Irving can play off the ball have been swirling. Irving wasn't great last year when asked to catch-and-shoot. Why was that the case?

Share All sharing options for: Analysis: Why were Kyrie Irving's catch-and-shoot numbers so bad?

The Cleveland Cavaliers are going to undergo a major transformation offensively as they head into next season. Gone is Mike Brown's stagnant offense that relied on pick-and-roll sets and not much else. Inserted in its place is what should be a much more complex and effective offense, engineered by David Blatt and piloted by Kyrie Irving and LeBron James.

However, the changes the Cavs have undergone this offseason have generated some concern about how effective Irving will be within the new offense. The Cavs' offense has relied pretty exclusively on Irving attacking with the ball throughout his career, but with LeBron in the fold now, Kyrie's offensive role is about to change drastically. Because LeBron will command a high amount of touches offensively, Irving is going to be spotting up and playing off the ball more than he ever has before.

The concern surrounding Kyrie's abilities off the ball mostly centers around his spot-up shooting ability. Last season, via SportVU data, Irving shot 35.6 percent on catch-and-shoot shots, and just 32.1 percent from three on these opportunities. In Synergy's spot-up classification, he shot only slightly better: 38 percent from the field and 33 percent from three. This was a minority of his offense last season, and with what could be a lot more opportunities this season, there is rightful concern over whether this could limit Irving's effectiveness, and by proxy, the Cavs' offense as a whole.

Tim Sartori of Nylon Calculus*** highlighted this in a piece discussing catch-and-shoot vs. pull-up jumpers on Friday, and it showed that Irving had one of the biggest disparities between catch-and-shoot and pull-up numbers. Irving shot 40.6 percent overall and 40.9 percent from three on pull-ups, the latter of which was the highest mark in the league among players who took at least two pull-up threes per game. Usually players are much better spot-up shooters than they are off the dribble, and the huge disparity between Irving's percentages is very rare.

But what is the cause of Irving's poor spot-up shooting? A lot of it has to do with his jumper itself. Kyrie's form on catch-and-shoot opportunities and pull-ups differs, and this contributes to the inconsistencies between the two shot types. Irving is known for his smooth release on his shot, and excellent body control when pulling up off the dribble. However, when he attempts a shot from a stationary position, he's much more mechanical with getting his shot off. Here's an example of what Kyrie's jumper can look like during a catch-and-shoot, from last season's game at Oklahoma City: 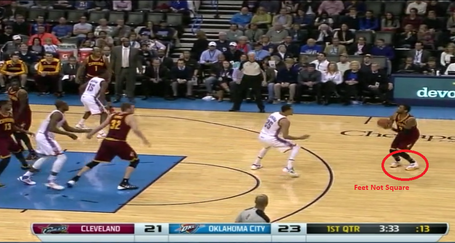 Irving catches a pass from Spencer Hawes above the break. He's created good separation from Thabo Sefolosha upon receiving the pass, and has room to be able to set himself. However, he somewhat rushes into the shot, and his feet are not set square to the basket as he begins his motion: 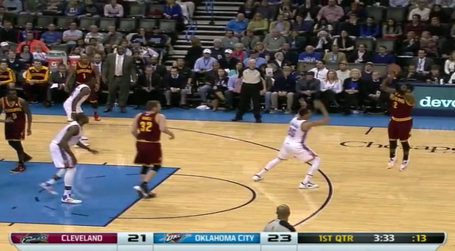 At the top of his jumper, Kyrie is not completely square to the basket, and his release is also not ideal. Kyrie should already be releasing at this point, but he has yet to even begin to extend his elbow and begin his release. This results in Kyrie releasing the ball on his way down, which alters the arc on the shot and causes him to miss front rim.

This is a commonality during Kyrie's spot-up attempts. He is often off-balance, or set in a way that he isn't completely square to the basket when he releases his shot. If he is squared up, he is much more likely to hit his shots, which is pretty intuitive, but more often than not he wasn't set because of a bad pass or an attempt of a rushed shot.

Kyrie's release is also much more variable when he is spotting up. As shown above, he released late enough that it messed with the trajectory of his shot. Irving trends towards attempting to measure his release when he catches in a stationary position, and this often results in his stroke coming later, which alters his shot's trajectory and leaves him more open to being affected by a defensive contest.

When Kyrie pulls up, however, we see the fluid and quick release that Kyrie is known for. Watch this video of a quick pull-up jumper in transition against the Pacers, and notice the differences in where his feet are set and his release point:

Kyrie's feet are much more square during this shot, and in addition to his smooth release, the release point is right after he hits the top of his jump, exactly where the release point should come. Kyrie also has the benefit of being able to catch the defender in a compromised position due to his ball-handling skills, as he did to David West in the above video with that little crossover.

This point leads to a larger reason why Kyrie might be more effective as a pull-up shooter. On pull-ups, Irving is in control of what happens. He decides what moves to put on a defender, he decides the shot type he wants, and he decides when to actually pull up. On catch-and-shoot opportunities, he isn't completely in control of where or how quickly he gets his shot off, and the defender is usually more prepared to contest that shot. This could mean he has less confidence in his catch-and-shoot jumper, which leads to the more mechanical release.

Much of that outside interference was in play last season for Irving as a result of his teammates. An effective catch-and-shoot shot is dependent on the shooter's ability to get a quick, square shot off. This is especially true for a shooter that isn't totally confident in his catch-and-shoot shot, as Irving appears to be. This is largely dependent on the shooter receiving the ball in a position to shoot. Here is just a small sample of where Kyrie received passes from teammates: 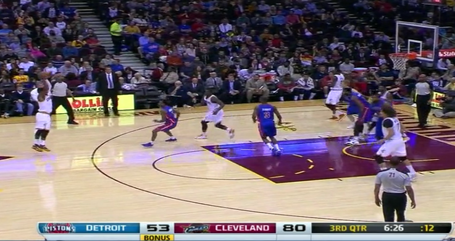 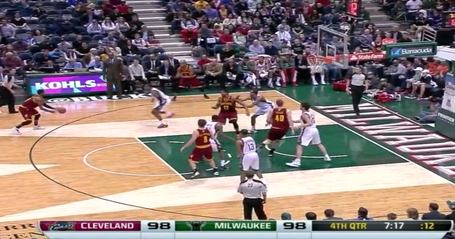 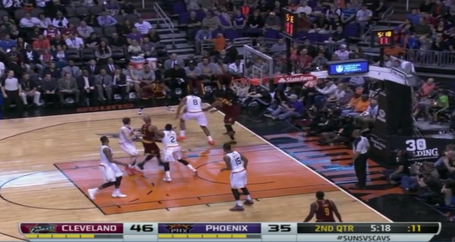 The Cavs were not a crisp passing team last year, and Irving received a fair amount of bad passes leading to shaky catch-and-shoot shots. That, on top of his mechanics, really is what led to Kyrie's struggles last year.

Moving forward to this season, Irving should be able to improve on his catch-and-shoot numbers as a result of the change in system and personnel. The Cavs should be a more disciplined team this year, which will likely cut down on the amount of lazy passing that helped kill the offense last season. LeBron is also an elite passer, especially in finding teammates that are spotting up, and hitting them in the flow of the offense. That should help create better looks for Kyrie than he was getting last year off of lazy passes from Jarrett Jack and Dion Waiters.

Irving will also have much better spacing on offense when he gets catch-and-shoot opportunities. Often last season, C.J. Miles or Waiters was the second-best shooter on the floor when Irving spotted up. Now, in addition to an improving Waiters, the Cavs have James, Mike Miller, and James Jones to help spread the floor and keep the defense honest. That's going to help in pretty much every regard for the Cavs' offense, but especially will help Irving get more comfortable looks on kick-outs.

While the Cavs should be able to get Irving better looks offensively, he does need to get slightly more consistent with his jumper mechanics. Part of this will come with time, as more comfortable looks and better spacing will help Kyrie become more confident in his shot. However, getting him to have the consistent mechanics that he's displayed with his pull-up jumper is also important. The pull-up has been one of Irving's biggest weapons since he was a high schooler, and really only since he joined the NBA has he been asked to regularly spot up off the ball. Give him time and focus to get his mechanics consistent, and Irving should be able to make this a regular weapon in his arsenal, making him an even more threatening NBA shooter.

*** Originally we credited the Nylon Calculus piece to Ian Levy. While it was posted by him, it was actually written by Tim Sartori, of 8points9seconds.com. Our sincerest apologies Tim!