What does Anderson Varejao do for the Cleveland Cavaliers defense?

Anderson Varejao has a reputation of being a solid defensive post player. He's likely going to shoulder a big burden on the defensive end this year for the Cavs. What are his strengths and weaknesses as a defender, and how will that affect the Cavs' overall team defense?

Share All sharing options for: What does Anderson Varejao do for the Cleveland Cavaliers defense?

Anderson Varejao is widely regarded as a solid defensive center for the Cleveland Cavaliers. Over his 10 years as a member of the team, he's always had one of the lowest defensive ratings on the team, and since his 2nd-Team All-Defense honor in the 2009-2010 season, he's been regarded as the Cavs' defensive anchor. Even through his three injury-plagued seasons from 2011-2013, he was the best defensive player on the Cavs by a hilarious margin.

With the roster turnover the Cavs have experienced this summer, Varejao's defensive prowess will be put to the test. He's used to this, of course, as he's spent the last four years as the team's best, and sometimes only, competent defensive player. With LeBron James, Kevin Love, and Shawn Marion on the roster, and expected improvement from Dion Waiters and Tristan Thompson, Varejao shouldn't have to shoulder as much of a load for overall team defense as he has in the past. However, Varejao is currently the only real center option the Cavs have on the roster, and he's still likely going to have a big responsibility in the middle of the defense.

With that responsibility on him, how good is Varejao defensively? Last season, Varejao made the Cavs' defense 4.3 points/100 possessions better on the defensive end when he was on the floor, a very solid number, and finished 23rd in the league in ESPN's Defensive Real Plus/Minus metric at +3.59. He had an overall defensive rating of 102.4, a solid number given the Cavs deficiencies on that end last season. This much is clear: many of our defensive metrics love Anderson Varejao's impact.

The thing that makes Varejao an interesting case on the defensive end is that he is not a prototypical defender by any means. Varejao is incredibly active on the defensive end, covering a ton of ground and always moving some part of his body. His activity is easily is beautifully on display in this video from Drew Garrison:

Varejao defends two PNR attempts and an Al Horford post-up on that play, and never stops moving throughout the duration of the play. That activity makes him effective by itself, and he can be a major pest for opposing teams in the halfcourt.

With that said, let's look at where Varejao struggles defensively. Varejao spent a lot of time defending on the perimeter against pick-and-rolls last season, and this can be one of the more inconsistent areas for him defensively. Varejao does a great job of containing guards in the PNR and not allowing them to drive. This is very beneficial to the Cavs defense, as it often bails out guys like Kyrie Irving and Dion Waiters when they get tangled up in the screen. However, Varejao over-commits to this, and it often results in him being unable to recover fully to his man, and his man being able to get a quality look. Below is a great example of this from a game against the Pistons last season: 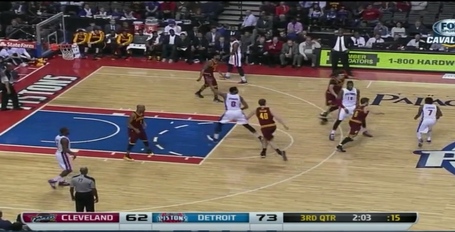 Varejao hedges hard against a Brandon Jennings/Greg Monroe PNR as Matthew Dellavedova goes under the screen. Varejao's trapped Jennings on the perimeter, preventing a drive to the rim. However, when Monroe slips the screen, things go south for the Cavs' defense: 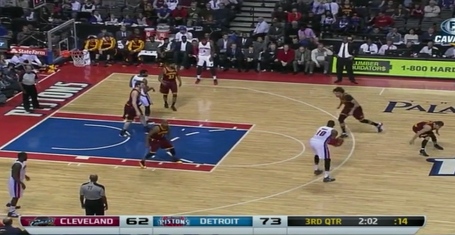 Varejao stays in his hedge a little too long, and has to scramble back to Monroe, who has a wide-open lane to the rim with only Jarrett Jack in his way at this point. Now, Varejao is quick enough to recover to get a contest, but he can't cut the drive off, and it ends in a good look for Monroe. 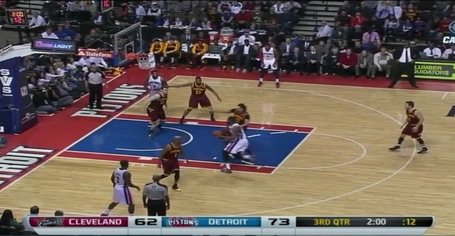 Varejao does this almost every time he defends a PNR, regardless of the threat or positioning of his teammate. Against the Jennings PNR, Delly struggled against the high screen, and Jennings is actually a threat to score on a drive. Here's an example against Chicago. Carlos Boozer gets a wide-open look here, because Varejao has decided D.J. Augustin needed to be contained, even though Kyrie Irving's actually in decent position: 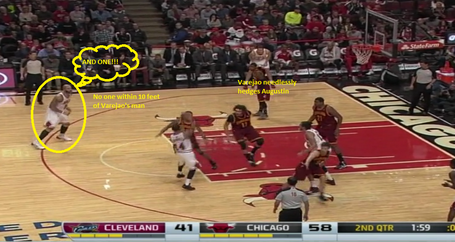 This over-hedging can be maddening at times, and while it was certainly not helped by Mike Brown's defensive system or the Cavs' guards inability to negotiate high screens, Varejao's sense of positioning in the PNR is not great.

Varejao's footwork against drives is also questionable. He is one of the quicker bigs in the NBA, and can stay in front of most post players and many wings with no issue. However, Varejao's lateral slide isn't ideal, and he can get caught off balance and give up open looks because of it. Here's an example where Varejao gets switched onto Nate Wolters and gives up an easy look because of his footwork. Upon initiation of the drive, Varejao's in good position: 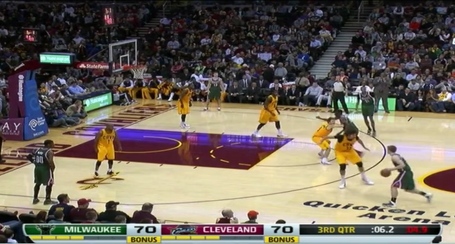 However, when Wolters really gets going, Varejao brings his feet together in the shuffle, allowing Wolters to hit him with a crossover and get inside: 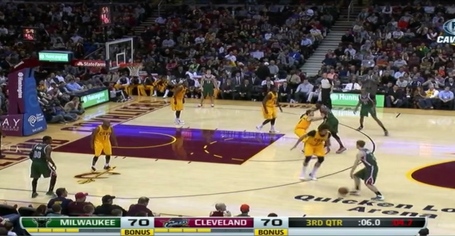 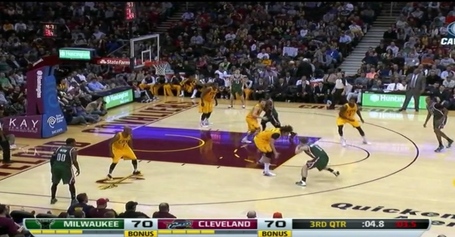 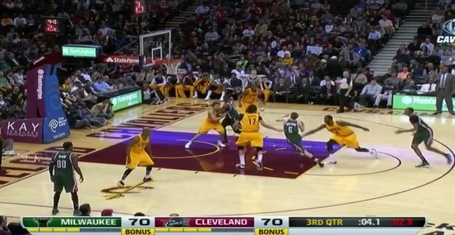 On the perimeter, Varejao isn't nearly as technically sound as he is as a post defender. Varejao's size can raise concerns about how well he can handle the bigger centers of the league, but in post ups, Varejao can be a very frustrating defender for even the best post-up threats of the league. Varejao rarely gets backed down in the post, and most of the time opponents have to settle for fall-aways, jump hooks, or turn-around jumpers from outside the paint. Here's a perfect example against Al Jefferson of Charlotte: 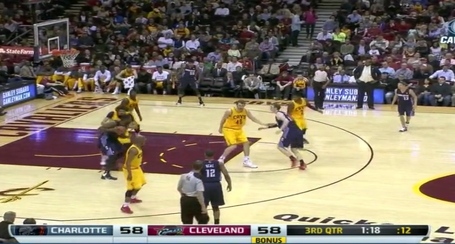 When Jefferson posts up Varejao, he has established good position. Varejao will give up post position quite often, but once his man gets the ball, he's in position to cut off a direct route to the rim. Jefferson thinks he has position to spin to the rim, and does so, but Varejao cuts him off beautifully: 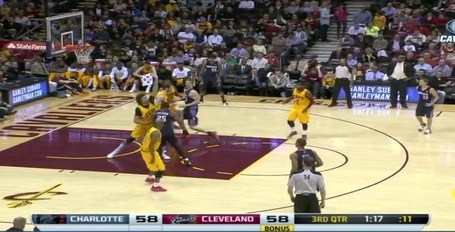 With nowhere to go out of this, Jefferson is forced to attempt an ugly fall-away jumper: 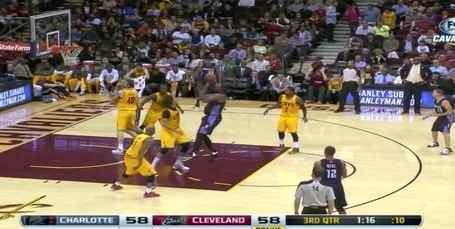 That's one of the best post-up scorers in the NBA, completely frustrated by Varejao's defense. Varejao is not without faults here, of course; he fouls a little too much in the post (11.5 percent of his post-up defenses ended with shooting fouls last year, per Synergy), and he can get worked by players with really quality baseline spin moves. Roy Hibbert in particular usually has his way with Varejao because of his very strong baseline jump hook. However, Varejao is likely going to be the Cavs' only player who can defend good post scorers, and it's a very good thing that he's effective against them.

Varejao's rim protection ability gets rightfully called into question. He gave up 54.2 percent at the rim per SportVU data last season, and he's not a threatening presence as a shot-blocker. However, Varejao does a great job at defending spot-up opportunities, and that's what makes him a truly special defensive player. Varejao ranked as the 23rd-best spot-up defender in the league per Synergy, and he faced 112 plays in this category, giving up 36.9 percent shooting. That's outstanding.

It's easy to see why Varejao is a great spot-up defender. After all, who's shot wouldn't be affected by this flying kamikaze at them? 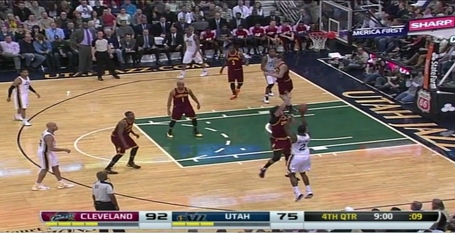 Varejao closes out really nicely on opposing shooters, contesting without fouling (only 2.7 percent of the time). He also covers a ton of ground, which is a huge asset. Varejao on the above play started by guarding Marvin Williams in the corner, then covered Derrick Favors inside on his roll to the basket before flying out to contest Williams's three. That type of coverage plugs a lot of holes for a defense, particularly one that was as bad at rotating as the Cavs were last season.

This is what makes Varejao such a fascinating defensive player. Conventionally, we think of the modern defensive center as one that protects the rim, defends the PNR, and covers for mistakes by letting the mistakes come to them and bailing their teammates out by blocking shots at the rim. Varejao accomplishes the same goal through a different means. Varejao doesn't let the mistakes come to him; he attacks the mistakes by flying around the floor like a crazed piranha that's smelled blood in the water. And that might be more useful to the Cavs' overall team defense than someone who can just block shots.

We cannot be sure how the Cavs are going to play defense this season. We don't know what their philosophy for rotations, PNR defense, or helping on screens will be. However, the roster's new makeup lends to Varejao being Varejao once again. The Cavs now have LeBron, Love, and Marion, and all three will cover for Varejao's weaknesses while letting him play to his strengths. Love isn't a great defender, but he's another solid post defender, and can handle bigs in the PNR quite well. James is one of the best perimeter defenders in the league, and if he's locked in he can cover up a lot of the holes guys like Irving and Waiters will present on the perimeter. Marion is one of the better PNR defenders in the league, and should take over Varejao's role as the primary big against the PNR when he's in the game.

With these three on board, and hopeful improvement from Thompson, who rates as a solid PNR defender in his own right, the Cavs should just need Varejao to play to his strengths as a defender. Primarily, Varejao will likely be defending the best post player the other team has, and will be tasked with handling opponents in the paint while guys like Thompson and Love take the more athletic bigs. This should allow him more freedom to swallow up defensive rebounds, and will also allow him to be the main help defender, flying around the floor and covering up mistakes, just like he's done throughout his career.

The Cavs won't have great rim protection next season. However, that's fine. They'll have Anderson Varejao, flying around contesting jumpers and grabbing all the defensive boards.