LeBron James is back in Cleveland, but is he any good?

The best player in the world is back in Cleveland. Let's take a look at what he brings to the Cavaliers.

Share All sharing options for: LeBron James is back in Cleveland, but is he any good?

Four years ago, LeBron James left Cleveland went down to Miami. In his time away he went to the NBA Finals four times, winning two of them. He's the best player in the world, and has been for probably six or seven years. Sorry, Kobe Bryant. But what makes him good? How will LeBron fit on the Cavs? It seems kind of silly, but we haven't talked a lot about just what James will do on the basketball court in Cleveland.

In Miami, James did what a lot of people didn't think was possible. He got better. Over his last four seasons in Cleveland he had a (very good) true shooting percentage of 57.9%. His last two seasons in Miami? 64.5%. Famous for an unwillingess to work from the post in Cleveland, he added that to his offensive arsenal and is largely unstoppable from there. Surrounded by shooters in Miami, he ruthlessly passed out of double teams or converted high percentage shots near the rim. He gets to the line at an incredible rate.

According to Synergy, there wasn't a single play that they track that James didn't average at least a point per possession on last season. In his final two years in Miami he shot 39.1% from three point range. Here is his shot chart from last season: 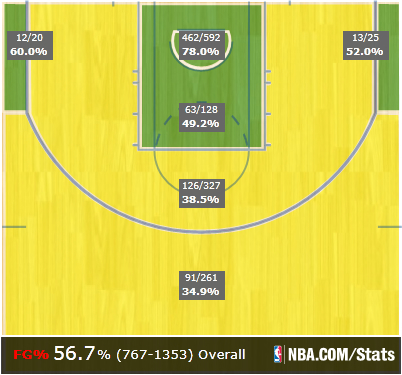 44% of his shots came at the rim, where he is 18% better than the league average 60%, via nba.com. So, that's a pretty good way to make sure that you are efficient. For a small forward to be that good around the rim? James remains a transcendent player.

He will be able to take the burden off of Kyrie Irving, as well as complement his game. We have been hoping the Cavaliers could add someone that would be able to run the pick and roll, pick and pop with Irving. James is most comfortable with the ball in his hands for the pick and roll, but he's been elite as a roll man. He averaged 1.23 points per possession as the roll man last season, via Synergy.

A phenomenal passer, he will be able to get the ball to Anderson Varejao, Tristan Thompson and Dion Waiters in spots that are conducive to their skill sets. Thompson, oddly, might find himself in a Dwyane Wade type role in the offense. Wade's inability to space the floor made him an imperfect match with LeBron, but he would creep along the baseline and look for seams to cut through to finish at the rim. Regardless of the progress Thompson makes on his jumper this summer, he will benefit from the attention teams have to place on Kyrie and LeBron. No longer will the Cavaliers be giving it to Thompson in the post and asking him to create on his own. Of course, I have no idea why that was happening before, either.

Waiters has long been skilled as a spot up three point shooter, and he has already talked about watching film of Dwyane Wade playing off of LeBron. From Brian Windhorst:

"I have to make adjustments," Waiters said. "I like to have the ball, and we have Kyrie, and he likes to have the ball. So I have to find ways to impact the game without having the ball. I'm planning to go watch tape to see what D-Wade did when he played with LeBron. I need to learn how to be effective out there with him."

I don't know that Wade is exactly who I want Waiters to try and emulate. The Cavaliers are going to need his three point shooting. But it's a great sign that he's talking about finding ways to make it work. Irving and Waiters are likely to see their shot attempts go down, especially if Kevin Love enters the fold. It should allow each to be more efficient.

As for Anderson Varejao, well, James and him have played together before. But now Varejao has added a reliable midrange jump shot. The LeBron-Varejao pick and roll combo with some combination of Irving, Waiters, Mike Miller and hopefully Ray Allen spreading the floor? Wow. It could be really fun. I expect Varejao to come into camp somewhat rejuvenated. The team won't be asking as much of him, so the hope is that less minutes and less activity will help keep him healthy.

James' defense did take a step back last year, but it always felt like that was more of a conscious choice he made. The Heat had an elite offense, largely because of him, and it seemed like he was resting on defense a bit. If the Cavaliers add Love, it could be the reverse situation in Cleveland. Irving and Love will keep the Cavs offense effective even when James sits. And the Cavs can ask him to expend a bit more energy defensively. Despite the (relative) down year, he remains strong and huge and able to capably guard wings and fours. He doesn't like the grind of guarding power forwards consistently, so there is still a need for Varejao and Tristan Thompson on that end.

This is the greatest free agent signing in the history of Cleveland sports. A title isn't assured, of course, but LeBron James is really good at basketball and things at the Q are about to get fun.