Return of the banner: New LeBron James mural could be raised in downtown Cleveland

The iconic billboard may be returning to downtown Cleveland, with a new twist.

Share All sharing options for: Return of the banner: New LeBron James mural could be raised in downtown Cleveland

When LeBron James returned to the Cleveland Cavaliers I, like the rest of the world, sat back and wondered about the most important issue surrounding his return: Would the banner return?!

Well, Tuesday afternoon Cleveland.com reported that a design for a new banner has been submitted to the Cleveland Planning Committee once again featuring James' outstretched arms. The banner would of course be situated on the wall of the Sherwin-Williams headquarters complex overlooking Quicken Loans Arena. This is reportedly the design that was submitted: 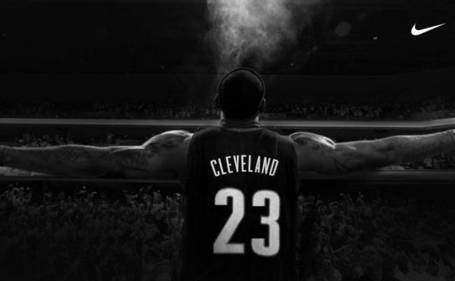 Personally I would have liked to see at least Kyrie Irving and Kevin Love featured on the billboard. But incorporating the crowd in front of James as well as the symbolism behind having a reverse of the previous billboard is a really cool touch. While the team is certainly no longer a one star show, LeBron James will likely remain the face of the franchise for the remainder of his career and is clearly depicted as such in this design.