A primer for Cavaliers fans regarding their new power forward.

From the moment the Minnesota Timberwolves made the unwise decision to withhold a max five-year offer to Kevin Love, there was chatter about where he'd play next, because he clearly wasn't long for Minnesota. Few things move the needle like speculating about player movement, and due to Love's unsettled circumstances, he was on everyone's mind, mostly because he was never far away from the headlines. The attention led to criticism, sometimes fair, sometimes unfair. But even the harshest critics of Love's game would have admitted, if pressed, that they'd like to have him on their team. Which is exactly where Cavaliers fans find themselves right now.

Despite Cleveland's joy at their surreal offseason moves, there are a few misconceptions about Love that simmer below the surface and deserve attention (and debunking). The loudest criticism of Love has to do with his work on the defensive end; Grantland's Zach Lowe has already dealt with that fairly and definitively (here and here). But you also may have heard he's an overrated passer due to the spectacular nature of his outlets, that he's "not clutch," or that he has a "bad attitude" or "isn't a winner", all of which are points that can be addressed and fairly disputed.

Misconception one: "Sure, his outlet passes are highlight-worthy, but that doesn't make him a good passer."

First of all, nobody enjoyed Kevin Love's outlet passes more than I did; I was sitting twenty feet from the court for many of them in 2013-14, and those couple of seconds after he flicked his wrists and sent the ball on a laser-guided path to the hands of a running Corey Brewer or Kevin Martin were basketball magic. You've seen mixes like this before, but take a moment to watch another:

But what you may not know is that the overwhelming majority of his assists came in half-court sets, often throwing to cutters, deftly using his body to set screens on hand-offs for shooters, passing out of the post, or even occasionally putting the ball on the floor and creating space for a pass.

Here's a chart of the approximate areas Love was standing for each of his assists last season: 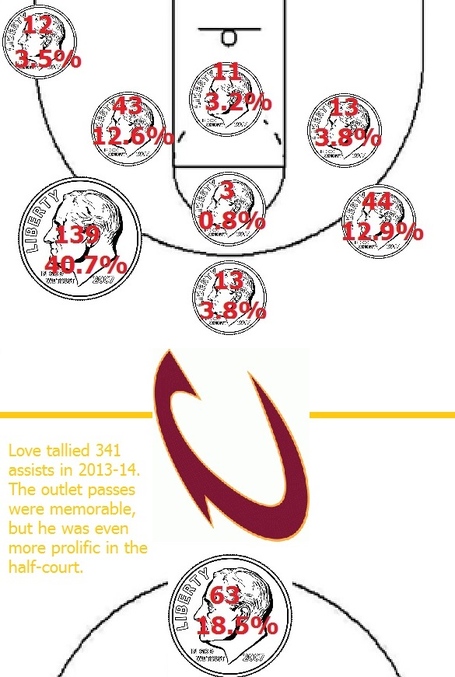 As you can see, about a fifth of his assists came from inside his own three-point arc, either on an inbound pass or off a defensive rebound. But over 40 percent of his dimes originated from the left wing, and more than 13 percent came from the high left block. Most of those assists looked something like this:

The Wolves were in the bottom third of the league in finishing at the rim last season, meaning there were plenty of great Love passes that weren't capitalized upon. Now imagine him throwing elbow passes (nevermind outlets) to a cutting Lebron James or Shawn Marion, or running hand-off screen action to free up Mike Miller (or Ray Allen, if that happens) for an open perimeter look. While Kyrie Irving and LeBron James will initiate the offense, Love's ability and willingness as a passer will be a terrific asset - and not just as a "home run" outlet thrower. Although those will be pretty sweet, too.

Many people remember Love missing three key free throws at the end of an extremely entertaining Wolves-Thunder game back in January. Some may recall that the Wolves opened the season 1-11 in games decided by four points or fewer, and only improved their late game fortunes when the playoff dream had died. A few might know that the Wolves' net rating during the last five minutes of one possession games was -28.2 points per 100 possessions, and that Kevin Love was on the floor for almost all of them.

To take it a step further, consider who Love's best teammates have been during his Minnesota tenure. The oft-injured Nikola Pekovic? The aging Kevin Martin? Rookie year Ricky Rubio? Al Jefferson? A disinterested Mike Miller? Darko Milicic? I mean, it's not exactly an impressive list of names. Prior to last season, on the rare occasions the Wolves found themselves in close games, defenses knew exactly who to key on, and option two was hardly a good alternative. It's no wonder Love's numbers look the way they do. Kevin Durant shoots 35 percent from the field and 32 percent from three in those same situations and he has Russell Westbrook and Serge Ibaka.

Could Love improve late in games? Absolutely. But labeling him as being "un-clutch" without taking all the factors into account is a mistake. A late game lineup featuring Love, LeBron and Kyrie is sure to produce better looks, and thus better results, than anything Love's been capable of before.

Misconception three: "Kevin Love isn't a leader or a winner."

Rather than dealing with facts and figures, any response to this misconception must dive into the subjective world of semantics and conjecture. To say a player "is not" a winner because he "has not" won is misguided. It also pretends to know the complete nature of the player (and person) in question, which is somewhat absurd, because as much as we watch and appreciate Love as a basketball player, what motivates him is (and will always be) somewhat of a mystery.

But if I may take a stab at answering this often-repeated jab at Love: after covering him for a year, I believe he might be the sort of person who reacts to his surroundings, rather than the type of person who attempts to control them. He's content to work hard on his own game and let his organization (both his teammates and the front office) do their jobs. What happened in Minnesota, from his perspective, was a failure by the organization to create a winning basketball team around him. What happened with Love, from Minnesota's perspective, was somewhat of a failure by the player to do everything he could to foster a winning culture.

Eventually, the uneasy working relationship became an unfeasible one, and now Love is in Cleveland. It won't matter if he's not a leader, because LeBron James is the leader. And a player who's never played with an All-Star caliber teammate before will share the floor with two of them. Chris Bosh "wasn't a winner" either; no one thinks of him that way now. Expect a similar shift in public perception with Love, because he's got all the makings of being the right fit for this team, a tenacious rebounder, a willing and able passer, and a threat from outside who can help take the Cavaliers where they've never been before. And one by one along the way, these misconceptions will evaporate.