If you ask fifteen different people about Dion Waiters you may get fifteen different opinions (unless you ask Fear The Sword, then you'll get only one) (I kid). The divisive Syracuse slasher has had an uneven beginning to his NBA career, but harbours a skillset that is a highly valued commodity in the league.

Back before the 1.7%, the Cavs were rumoured to be considering offering Gordon Hayward a very large contract, one he ultimately received via a Charlotte Hornets offer sheet that was promptly matched by the Utah Jazz. During this time, I opined that it wouldn't be wise to offer Hayward a contract with Waiters and Irving as young building blocks due to a concern over the perimeter usage.

Luckily, the Cavs won the lottery, LeBron James decided to return home and all concerns over paying $70M to Gordon Hayward were alleviated, however the issue of usage is still an important one.

In my previous fanpost, I did not have the adequate data and had to draw out some very wide and unsubstatiated assumptions in order to draw conclusions. Now, thanks to the fantastic work of Seth Partnow of The Nylon Calculus, we have a stat called "True Usage" that allows us to take a better look into what the limits of a perimeter trio can have.

I decided to take a look a the top ten teams in terms of offensive efficiency last year (per NBA.com) to see how their "True Usage" lined up. I took each team's top three man lineup in terms of minutes involving a player who primarily played point guard, shooting guard and small forward (with distinctions being made for guys like LeBron and Carmelo Anthony, who, although were denoted as power forwards last season, spent a large amount of their time on the perimeter).

Here are the results: 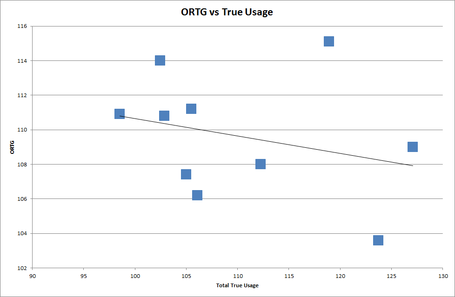 As we can see here there is actually a slight negative correlation between Total True Usage for a perimeter trio and its offensive rating, showing that more is not necessarily better in this regard. In fact, a higher true usage may be a bad thing for a team. 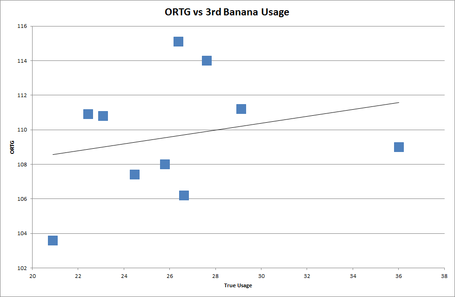 One point that has been raised is that having a "third banana" that can attack off the dribble and create for themselves means that teams can attack the weakest opposing wing defender depending on matchup. The data supports this slightly, although the correlation is weaker than the negative correlation between total true usage and offensive rating.

Some of these lineup combinations are inherently effected by noise. For example, the Paul/Collison/Barnes combo that set the world alight only logged 431 minutes together, and the Westbrook/Durant/Sefolosha group that strangely put up a pedestrian ORTG logged just 631 mins.

Also, with just a ten lineup sample, the data is likely incomplete. Small samples do not make the analysis pointless, rather that inferences drawn must be cautious.

The small sample also effected the "third banana" chart, where the exceptionally low usage Thabo Sefolosha proved a drag on the Durant and Westbrook combo, and subsequently propped up the entire chart. The same trio put up 110.8 points per 100 possessions a year ago in a shade under 1800 minutes however, so it may be Sefolosha's ridiculous fall off of the three point shooting cliff that may be the greatest hindrance on the offensive rating.

The Miami Heat's sky high true usage can also largely be explained by Chalmer's rate being artificially inflated by acting as the secondary ball handler while Wade was rested.

So, how does this effect the Cavs? The first thing we should do is take a look at what True Usage levels Irving and Waiters put up last year.

Kyrie Irving's True Usage was 48.41, with Dion Waiters' sitting at 40.51. Add in LeBron James mark of 48.06 and you get a Total True Usage of 137 - a number that is almost 3 standard deviations higher than the mean Total Usage rate for perimeter trios of top ten offenses.

Not only this, but Dion Waiters sitting at 40.51 as a 'third banana' would be more than 3 standard deviations higher than the mean third banana in the sample. The Waiters mark would be so much higher than any non-Chalmers mark that something would certainly have to give.

While there is sure to be regression on the part of all three projected starters, the True Usage would still likely be much greater than any team in the league last year and it is almost certain that one of the three (probably Waiters) would be relegated to spot up duty while the other two are on the ball.

So what to do with this situation? In comes Matthew Dellavedova. Dellavedova's True Usage of 33.53 would instantly lower the Cavs to the point where reasonable regression would align the team with the other two teams with two superstars on the perimeter (Miami and OKC). Dellavedova is also a unique case where (eyeballing here) a decent proportion of his assist opportunities come as a function of just simply moving the ball, meaning that his True Usage may in fact be slightly inflated.

It is also hard to see this becoming a Sefelosha situation - there is little chance that Delly shoots 31% from beyond the arc next year considering his college numbers and decent rookie accuracy.

I hope this enlightened some of you and isn't too jumpy. I'm sure some of you (or possibly all of you) will disagree with me, so make sure to let me know why you think Waiters should start in the comments.